Twenty four days. That’s all that we have left in the countdown for Worlds. It’s hard to believe it’s already here, but at the same time it also feels like I won my invite a decade ago. Time is a weird concept. However, to try and avoid a deep dive into the science behind time and space, let’s stay on topic with Legion.

I have to say that the lead up to Worlds has been quite a time of list and meta anxiety. What faction do I play? What list do I play IF I bring this faction? Will the new stuff be out in time? (As we know they did come out but we weren’t sure for a while!) What about Vital Assets?! There are a lot of variables leading up to Worlds, but I finally have a grip of what I am bringing; I think.

The hardest part of trying to make decisions heading into Worlds was attempting to playtest as many list combinations that we could think of to see what would hold up in what we think the meta might be. I have tried many Rebel and Clone lists, some with success and some with no success, to try and break down what faction I want to play. At the end of the day I know that Rebels are more “competitive” at this current point because they have been out longer and they would give me the best chance at winning the entire event. As for Clones, I know they have shortcomings in a lot of areas but there’s also this new unit called the Saber Tank and man do I love that thing….but I also love Operative Luke. These are difficult times….one might even say these are the dark times.

This right now might be my leading horse in the race simply because I am able to fit five heavy weapons into the list, which is pretty big, especially when I am able to keep my dearly beloved DC-15’s in there. The tank loadout is probably the most interesting piece of the list as you all sit there and yell “BEAM, BEAM, BEAM!” but I have found that Aayla, High Energy Shells and Linked Targeting Array work just fine. I find myself recovering/shooting in the middle rounds often enough because I don’t want to move the Saber. If you haven’t heard, it basically has Weakpoint: Grand Canyon of Geonosis and can start taking wounds fast if you move it into a precarious position. Aayla helps with suppression, Rex supports the troops with tokens, and the corps can really hold their own in the thick of things. The naked troopers are often aiming and standing by to try and set off the Phase II overwatch “gimmick.” But, is it really a gimmick if it works consistently well? The only thing holding me back from locking in this list is because it needs more Phase II. I present to you….

Four Phase II’s? Am I crazy? I don’t know. Starting off each activation phase with four surge tokens is pretty, pretty good. Most of your army now becomes courage two, which is nice, and you have a variety of Overwatch and Offensive Push. Both of those upgrades are vital to the success of this list. After several games of testing, I ended up maneuvering some things and command cards because it turns out Comms Relay on R2D2 is pretty good for the Saber Tank. I can’t stress it enough: getting in as many reps to tinker with a list before any kind of tournament is massive if you wish to succeed. I was running the list with electrobinoculars on a naked squad to double aim the tank before this, but putting relay on R2 is definitely the better decision for how the list functions. The dice pool is pretty consistent enough to not need that second aim. The one thing that I don’t like about this list, and this is on a personal level, is the amount of Z6’s there are in the list. If you know me, I hate the Z6 on Clones which is ironic because I loved them on Rebels until the Rebel gunline died (Or….did it???). I guess the real reason for my disdain is that I just love the consistency of the DC15 squads as opposed to putting an Imperial Credit in a slot machine on Canto Bight. Choosing this list is going to boil down on how much of an impact Reliable and Courage 2 have in playtesting. 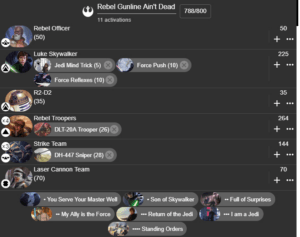 Hold the Comlink, 3P0, who said that the Rebel gunline was dead? Didn’t I disown the Rebel faction?! To be fair, it probably is and I definitely did. This list needs testing against Shores and Tauns before I make any kind of decision on it but as the great David Zelenka once said on Notorious Scoundrels: “Leia’s two pip can polish many a turd,” well the same can be said about Operative Luke. I don’t even think this list is all that great but Op Luke makes it great. He is a 200 point monster. When I put him on the table I feel very much in control and getting the list to 11 activations is pretty important for its success. Having all of my guns be range 4 or longer is as well. It’s a classic “give that man some covering fire” list that just does whatever it can to allow Luke to get himself into primetime positions. It’s going to be a tough decision when it comes to this list because of how much I enjoy Op Luke. He fits into my playstyle very well, specifically his defensive command cards that basically makes him a moving tank with a lightsaber. It might be time for us to take a time machine, kids, because the Rebel gunline is back.

As much as I would like to think anyone reading this has figured out exactly what they are running, because it is good for your mental health, I kind of hope a lot of you are in the same shoes as me. I don’t want to be the only person flip flopping on what to bring with a little over three weeks to go before we go to the biggest Legion event to date in terms of prestige. The only upside to this is that I’m pushing myself to get as many reps as I possibly can before Worlds just completely creeps up on us like the month of March did in itself. If I was completely comfortable with a list I would probably just say “eh, I know how to run this list. One game a week is fine.” and I would probably deeply regret that. So here’s to twenty three more days of list anxiety and second guessing whatever I do end up bringing!

Either way I fully intend to have fun with any of those three lists I posted above as I do enjoy running them all in the games I have played. I can’t wait to land in Chicago to stream, play and most importantly enjoy the company people I met at LVO and all the friends I have yet to have the chance to meet. After attending LVO I can absolutely tell you that anyone that tells you the best thing about these events is seeing all the people you interact with on the daily on the Discord or Facebook is telling the truth. There’s only going to be one winner at the end of this thing in terms of the game of Legion but we are all going to be winners with all the friends we meet at this event. I look forward to it! See you all soon!