The Las Vegas Open Star Wars Legion tournament was this weekend, and boy did it look like a blast.  Most of the Fifth Trooper crew made it, and while I was stranded at home watching the excellent stream, I did have time to put this super difficult list article together.

Despite being “just” a Grand Championship, LVO was easily the largest Legion tournament to date (besides the online Invader League) and should be an excellent marker for what to expect at the upcoming World Championships in March.

First of all, if you haven’t seen any of the games, check out the VODs on our YouTube channel here: Fifth Trooper YouTube.

Below are the top 8 lists, with some brief commentary on each.

Spoiler alert: all of these lists are based on either Shoretroopers or Tauntauns.  Color me shocked.

I’ve heard some people say that just because Tauntauns didn’t win, they’re fine.  That is definitely not the conclusion I’m drawing from this.  Nearly half the entire field was Empire, for starters.  Additionally, all three of the Rebel players that made the top 8 had triple tauntauns.  Not doing well… Rebel lists without tauntauns and Empire lists without Shores.

I’ll have some stats for you as well in a later article.

I should not that other than 1st and 2nd, these are just in the order listed on TTO, which isn’t standings order necessarily.

The World Champ made a last minute decision to flight out and crash LVO, and he came away with the top prize.  I don’t think anyone should be surprised that The Kid cleaned up, but Palpatine is an interesting choice.  He is a solid counter-pick in a tauntaun meta, because he’s still great against them.  He was my dark horse pick to take it, though I’m sort of sad the cat is out of the bag now.

I like the double medic in this list; between surging IRG (with Aggressive Tactics) and guardian, this is a surprisingly durable list that can trade decently with gunlines.  It is still going to be a bit of a slog against a Bossk gunline on an open table, as there isn’t really a good way to manage suppression, but it’s not an auto-loss either.  Indeed, Luke faced down probably the worst matchup for a Palpatine list in the final and got the job done.  It was a great game, I’d advise checking it out if you can on the VOD.

Speaking of that matchup…

Well this is certainly a counter meta pick.  There are no less than five copies of Hunter in this list.  It is designed to take tauntauns and characters head on and just bury them in dice and aim tokens.  It almost won Kyle the whole thing.

This is a token example (see what I did there?) of how the relay chain gimmick works.  Check out the Shoretrooper unit guide for more information on how to do that.

Personally I prefer Krennic in this sort of setup; you can put a relay on the Deathtroopers and dispense with the uplink, and I like Krennic’s cards better.  It’s hard to argue with results though.

No snipers is sort of bold, but there is so much ranged firepower in this list anyway. 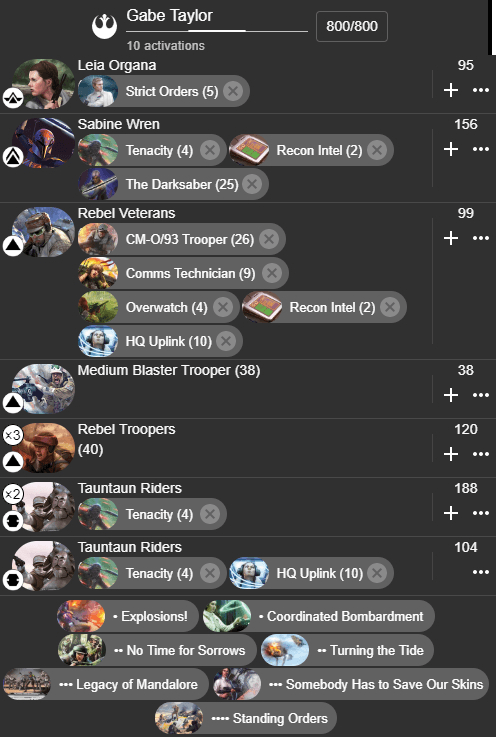 Leia, Sabine, triple tauntauns.  The vets are an interesting wrinkle; usually you see this with snipers instead.  Personally I think I would rather have the snipers, though I see what Gabe is getting at here.  They are designed for a turn one Coordinated Bombardment Fire Support shot.  I’m sure that worked a couple of times, but it is something that telegraphs pretty strongly and is easy to counter-deploy.  He tried this against Nathan Wilens’ shoreline on stream on Saturday and it got both units (the vets and the Mk2) completely wiped on the first turn with just two wounds caused by the bombardment 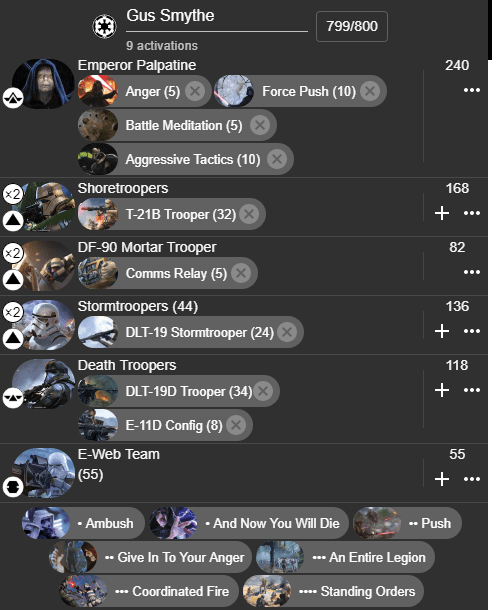 Hey look, another Palpatine list!  This makes me warm and fuzzy.

No snipers is interesting, but this is a beefy list with a lot of Pull the Strings targets.  It is also great against tauntauns.

This list also uses the comms relay trick (with battle meditation to loop it). 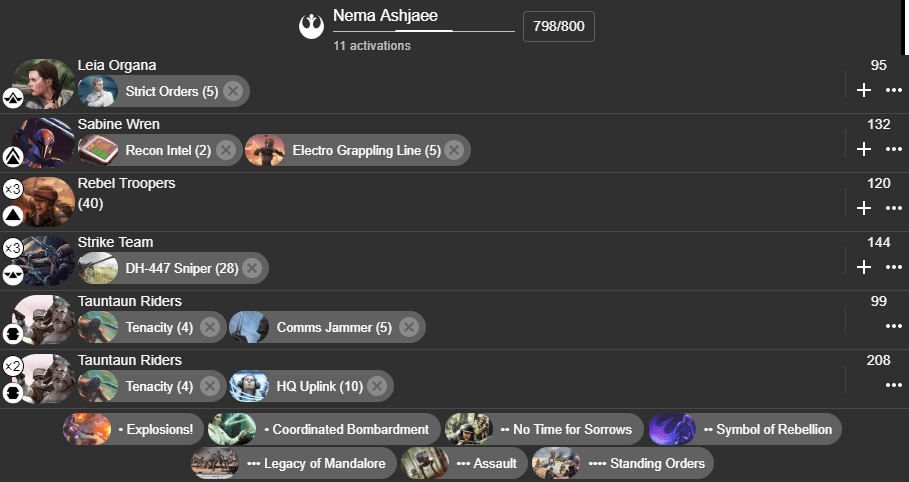 Leia, Sabine, triple tauntans, triple snipers, triple naked Rebel Troopers.  I think this is “the list” right now as far as Rebel tauntaun lists are concerned.  It is really good at controlling the board and preventing your opponent from interacting with objectives for as long as possible.  Nema gave Luke an incredibly close and exciting game in the quarterfinal, which is at the start of the Finals stream.  I would highly recommend watching. 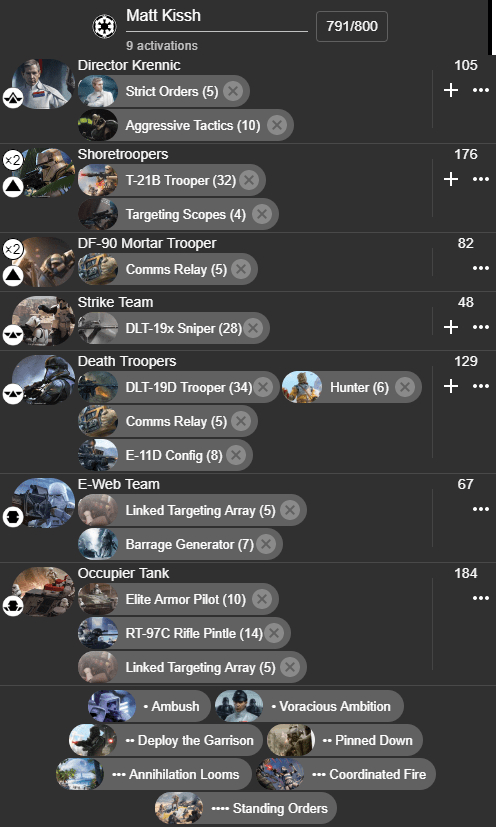 Krennic, Shores, relays, and… a tank!  I like the tank.  It’s a neat touch to this list, and since you have near perfect control with the relays anyway you don’t pay the usual face-up order cost of having multiple focus pieces.

This makes not one, but two E-Webs in the top eight.  I guess I owe Jay a beer, or something. 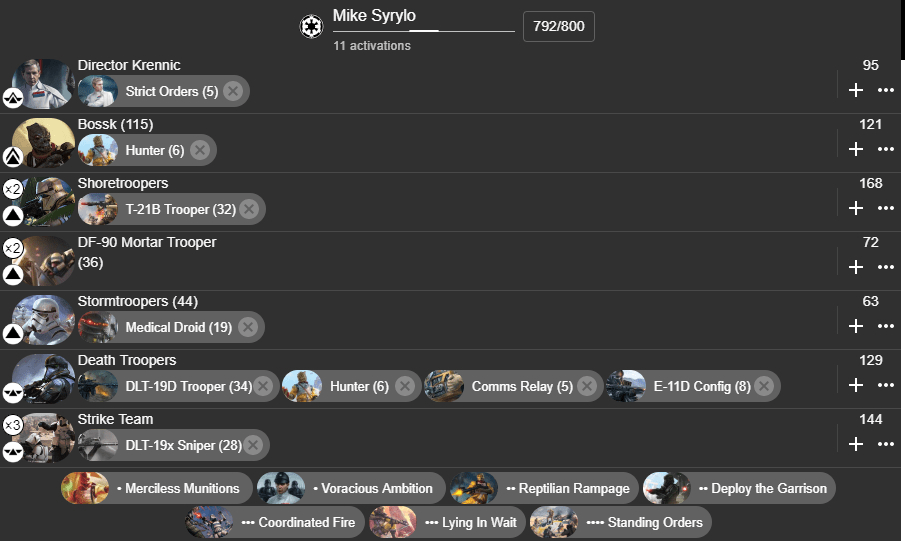 Good old fashioned Krennic Bossk.  This has a new name now, courtesy of JJ Wood.  I hope you are sitting down.  “Trandoshian’s Eleven.”  Because it is 11 activation Bossk.  Get it?  That might be my favorite list name ever.

That aside, this is a list that is positioned well to trade with Empire gunlines, fend off tauntauns, and deal with suppression.  I think this might be my favorite list of the bunch besides Luke’s Palpatine list, and I’m not just biased because he’s my Fifth Trooper teammate.  Well, maybe a little. 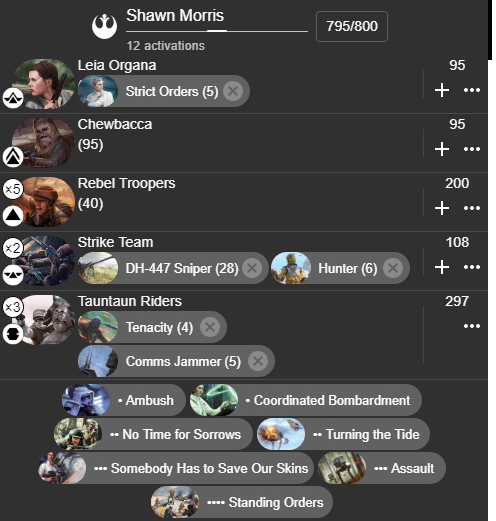 Leia, triple tauns, and hey… is that Chewy?  The Wookiee lives!  This is very close to Kingsley’s 2nd place Invader League season 4 list, except it doesn’t have R2 (who isn’t out yet, obviously).  The hunter snipers are a nice touch.  I’m sure those helped with mortars and tauntauns.

That’s it for now… I’ll be bringing you some hot data takes from the illustrious Bushfacts once all that data gets in.