Taverns of Tiefenthal is a two to four player game that includes elements of both deckbuilding and dice drafting. It plays in about 60 to 90 minutes, and is currently ranked 329 on BGG (https://boardgamegeek.com/boardgame/269207/taverns-tiefenthal).

In Taverns, you play as a bar owner, trying to attract patrons to your bar by hiring staff and producing beer. Played over eight rounds, each turn will see the bar owners draw cards from their deck until all tables are full, roll and draft dice, and then use those dice to produce either beer or gold from their cards. Victory points are earned almost exclusively from adding patrons into your deck, so the player that can tempt the most, and richest, drinkers to their bar will win the game!

So, why should you play Taverns of Tiefenthal?

The Player Boards
Let’s start by discussing the player boards, since they are a major feature of the game.

These player boards really are a unique component. While plenty of other games allow players to add or remove pieces on top of player boards, this is the first game i’ve played that actually allows the board itself to be modified and adjusted into multiple configurations. Each board resembles a puzzle, with almost a dozen tiles that connect to it. These tiles allow players to add/modify dice in their pool, add beer and gold storage, increase beer and gold production, and add tables to their tavern. 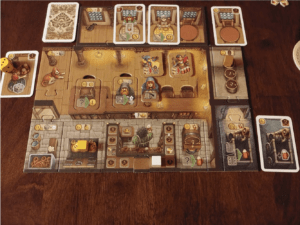 During gameplay, players will flip over tiles, both to make their tavern more efficient and score them end game victory points. The cost to upgrade each tile can also be offset by removing cards matching that tile from the game. It’s a fantastic system that allows players to thin their deck and improve their taverns efficiency. Aside from that, it’s simply a marvelous component that allows the player to feel like they own the bar. 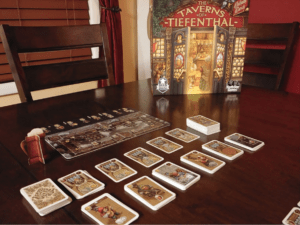 The deckbuilding options here are simple enough. Just 6 staff/upgrades cards are available to players, and while customer cards also get added to the deck, they all generally serve only one function. Yet those few cards allow players to quickly focus their strategy into a functional engine.

Each turn you’ll be able to add a patron to your customer base and hire staff to improve your deck. Acquired cards are added to the top of the deck, meaning you can use them the very next round instead of waiting to shuffle as in a normal deckbuilder. It’s a small, but important feature of the game that allows you to buy cards knowing you will be able to utilize them next turn.

Likewise, instead of drawing five cards each turn, you’ll draw cards until a customer sits at all your tables. Any staff or upgrades drawn are added to specific locations in your tavern and will provide benefits and/or actions for that turn. In addition, some of these cards can be used to assist in upgrading your tavern permanently. That means that adding staff and tables gives you a chance to draw more of your deck each turn, since only customers take up a table space. Unfortunately it also means the amount of cards you draw, and therefore the amount of options each turn, can be luck dependent. More on this later…

Multiple viable strategies (with the modules)

Once cards are played, each player rolls four dice (plus any additional dice provided by staff or upgrades), and then drafts them, moving their dice pool to the left each time a dice is chosen. Once all the dice are drafted, they are then assigned to tiles or cards in the tavern.

It’s this combination of cards played, and dice assigned to them, that opens up a multitude of choices and pathways. Adding dice to your pool provides additional actions each turn. Modifying existing dice values can make them more versatile. Focusing on beer production can add better customers to the player’s deck. Increasing the number of tables can serve more customers. Expanding income will add staff or upgrade the player’s tavern. And it all chains together so well. Producing beer can allow you to lure better customers, which in turn will produce more income, which in turn improves tavern & staff, which can then produce yet more beer, which in turn…you get the idea.

Aside from the base game, there are four modules that can be included. Each module builds on the one before, changing the game in slightly different ways, from alternative resources, variable starting conditions, and additional scoring tracks. Any experienced group should include these from the start as they will add some needed depth to the game. New or gateway gamers may want to start with the base game first, then add modules slowly in later games.

Even on the first play, the snapps module was a must play for me personally. Snapps are another resource that can be used to supplement multiple strategies. These are provided at points throughout the game and are used in combination with additional tokens that allow abilities such as the removal of patrons from the deck, additional beer and gold production, dice/deck manipulation, and free tavern upgrades.

You don’t like luck at all in your games. Because of the push-your-luck aspect of the deckbuilding, there just will simply be turns that your opponents draw more cards than you. Likewise, getting stuck with multiple three and four pip dice during the draft can derail early turns. 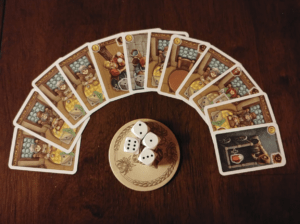 While I personally don’t enjoy massive amounts of variance in my euro games, there is enough here that allows players to mitigate the luck inherent in the card draw and dice rolls. Removing unwanted patrons and adding tables allows players to standardize their draws, and each player has the ability to redraw once or twice per game. Not once during my five plays so far have I felt that luck alone lost or won me the game.

Taverns never outstayed its welcome. Even with a full player count and all the modules included, we finished the game in under two hours. At eight rounds, the game gives you just enough time to execute some interesting strategies, while also making you wish you could have done more.

Drafting and deckbuilding are two of my favorite game mechanics, so any game that combines them so satisfyingly is an easy recommendation.