Today we’re taking a look at the newly dropped cards for the commander versions of Black Sun’s Vigo and Pyke Syndicate’s Capo.

Fresh out of the blogging retirement home, here I come with my very first article for The Fifth Trooper! I’m excited to work with such a great team!

We’ve already seen the corps choices for each of these mercenary syndicates, so we’ve got a slight knowledge of what’s going on. We also saw the Capo previewed at Ministravaganza back in September of last year. Lets look at the Capo first.

Both generic commanders have four wounds and two courage. Pretty much a standard for a generic commander across the factions. Same with the Command and Gear upgrade slots. We’ll examine that too. 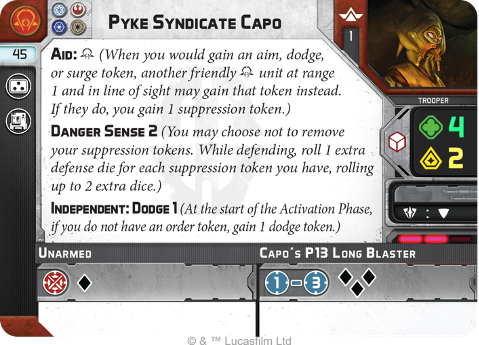 Like his followers, the Capo is slippery. Not giving them orders grants a free dodge token. With the Aid ability, Capo can throw that in support to his affiliated units. This also generates a suppression token for himself, which triggers his Danger Sense. More chances to roll that defensive surge!

Also like the gang, he’s got that range 3 Long Blaster. Tossing black dice at R3 is nice, especially for a gal that loves her Stormtroopers. The Capo hits pretty hard (for a generic commander) with three dice. Pretty cool! He’s got a single black die in melee. Not fabulous, but it could definitely be worse.

Aid is a new keyword that allows you to transfer tokens from the Capo to nearby Pyke units. This is kind of similar to clone token sharing; more flexible in some ways, less flexible in others.

If you want to get crazy with dodges you could throw a Portable Scanner on him. We’re up to four dodges on his target Pyke unit now (Independent on Pyke, Independent on Capo, Aid with dodge action and Take Cover) and they haven’t had to take any actions yet. That’s pretty annoying for your opponent. I dig it! Not a bad trade off for those white defense dice.  Aim and dodge in combination with Aid is probably more bang for your buck, though, because four dodges is (probably) overkill.

For the command upgrade slot we’re getting Lead by Example. A pretty cool ability for a lot of commanders that don’t already have it, and a nifty boost for those that do. Inspire 3 on my own Imperial Commander could go a long way. Inspire 4 on Leia? No rebel troopers fled that day! 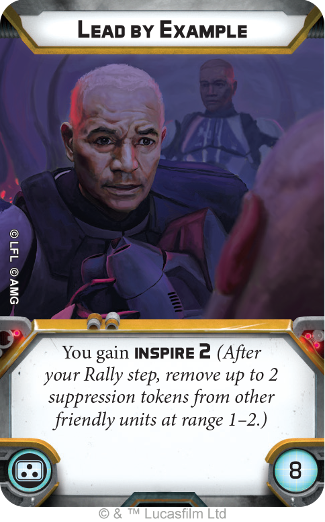 For the Capo though, I feel that Vigilance is his best friend. With all the dodges that he’s going to be handing out, being able to keep a few that weren’t spent during the turn is going to be handy dandy!

This is potentially interesting in Republic lists, which lack any meaningful way to mitigate suppression on Phase Is besides the expensive captains. I could also see it in Empire lists that don’t feature Compel for the same reason.

I feel like the Pykes are going to be very good at holding objectives. And very annoying to dislodge. They’re gonna need some backup though, once those Magna Guard show up.

Moving on, we’ve got the Black Sun Vigo. I’m pretty excited about this guy! As an Empire player, I do love my red defense dice. And the card is purple! 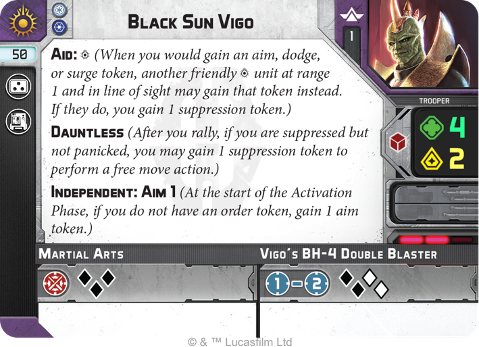 Vigo, like the Capo, has Aid (for his affiliation) and Independent. Unlike the Capo, the Vigo’s Independent is for Aim tokens. This works well since the Black Sun are pretty solid with those red defense. They do lack some range though, so it’s a bit of a pickle. They’re going to take a bit more finesse than first appearances show. Once he gets within range 2 though, the Vigo is gonna turn up the heat! His Double Blaster is doubled! With 2 black and 2 white, he’s hitting pretty hard. And heaven forbid you try and tackle him in melee. He’s swinging three black dice with his green lizard judo.

For his command slot, there’s nothing really that stands out to me that is going to really benefit him. I’m a strong believer in Vigilance across the board, but it doesn’t lend itself to absolute utility. Lead by Example also seems a little out of place on him, since Black Sun have some built in suppression mitigation.

In the gear slot, he could benefit from Portable Scanner to give some additional dodge token generation (or you can just take the dodge action) or Electrobinoculars to double/triple down on the Aim token generation.

We also got to see the mercenary command cards today! These are truly something different! Very exciting indeed!

So in each of these command cards we ‘must’ nominate a Merc unit. This isn’t awful, since they’re supposed to be for Mercenary units. We gotta keep that line drawn between who’s loyal to the Empire and who’s getting paid to be here, right?

What’s really interesting about these is that they’re command cards with the potential to issue NO orders at all. Funky! With the two and three pip cards, you can reduce the number of orders to generate aim and dodge tokens respectively. It also says ‘friendly Mercenary unit’ and doesn’t specify that they must be the same affiliation. Since orders can’t cross affiliations (assuming Shadow Collective is the same as the factions), this is a very cool mechanic for these cards. Otherwise it’s going to get complicated. It also synergizes very well with Independent.

Ploy is unique that it’s a non-character specific command card (i.e. ‘generic’) that allows you to nominate an Operative. Still not too out of the norm since we’re not issuing orders with this card.

We still get to put an order token on this card, but since we’re not issuing the order, any Independent keyword is still going to trigger. Basically, this is Ambush, but it still allows you to trigger Independent, with some subterfuge on which unit you actually have control of. If you are familiar with Krennic’s one-pip, Ploy is very similar, and very sneaky and I’m very here for it. Even more so since it features art for the Mandalorian Super Commandos. The other two cards lend themselves to being themed for the units pictured, so I am speculating that the ‘Mauldalorians have Independent as well. I can’t wait to see how they look!!

So whether you are chomping at the bit for Shadow Collective (like me) or looking to add some Mercenary units to your existing faction, you are getting some pretty useful tools in these commanders, especially when leading their respective corps units. I feel that bringing one of these Mercenary commanders on board will allow for another Mercenary unit of the same affiliation, but that of course, is speculation. We obviously are still eagerly awaiting the full Mercenary rules to see what is what and how many we can use in a faction, but these guys have me pretty fired up!

Cami Brown aka HurricaneGirl is a writer and aspiring game designer. She has been gaming since the dawn of time and more recently founded the War Dolls for women and non-binary gamers. Cami can be found lurking in various Legion and RPG groups online when not rolling dice and trying to win glory for the Empire.