Once a month we will be publishing a Star Wars: Legion fan fiction with an accompanying list. These tales will take you deeper into the world of Legion on your table and give you some insight into your forces and their motivations. We hope you enjoy these Tales on the Table.

After serving the Empire for over 16 years, my current position overseeing the Imperial security complex on Scarif looks like a nicely earned retirement to most. Thankfully, most of the time, that’s also how it feels. Though others have asked me, ‘General Ramda, how do you balance the training of troopers, allocation of resources to R&D, and stay ahead of the rebels at all times?’ Quite simple; Scarif Base practically runs itself.

Our troopers get training from veteran soldiers who have more experience in the field than those academy instructors. Resources are allocated ahead of time appropriately and all I really do is sign off on shipments. Everything is done by the subordinates at an efficient rate, as everyone knows how important their jobs are and how much the Empire benefits from what they do.

All of these autonomous duties, plus the gorgeous beaches and scenery one can see while gazing out the transparasteel, definitely make the base feel like a resort. But then I would argue it’s only a resort for someone of higher status like me. One can’t relax and enjoy the view if they’re attending to their training or terminals all day. So while it’s a resort to me, it’s an intense experience for most everyone else.

As for the rebel threat, I ask, what rebels? In this desolate corner of the Outer Rim, surrounded by some of the tightest security the Empire has to offer, the rebels would be stupid AND foolish to even attempt any sort of assault on the base.

Aside from the threat of a superior scolding or an intensive training exercise, the base is quite safe. The Empire keeps their most well-guarded, most-valuable secrets in our compound. For that reason, they’ve sent us some of the most well-trained soldiers the galaxy has to offer.

For example, we have the shoretroopers. These elite soldiers make up the bulk of our army, each one being all-around better than your average stormtrooper. For starters, they’re equipped with E-22 rifles, which allow them a much harder punch than those cheap E-11s. Recently we were even granted a shipment of T-21Bs, which some of the shoretroopers have been taking training courses in using. Part of a shoretroopers training is being able to raise their blasters quickly, and be able to take aim the moment orders are issued to them.

Issuing those orders is also quite important. The base has been known to scramble comm frequencies for privacy, so we always make sure to keep at least one squad with an uplink to our HQ. We also have a comms technician on standby with them to ensure we have a clear connection.

The other deadly tool the shoretroopers have at their disposal are the DF-90 Mortar launchers. These mortars are quite efficient at long range, being able to lay down suppressive fire and keep the enemy at a distance. Mortar operators also coordinate with our other forces, and should they need additional fire support, they can be ready to engage. Communication is key with our mortars, which is why we also keep them equipped with comm relays. This way, when orders are issued, they can be passed along to everyone, ensuring that everyone knows exactly what needs to be done and what to prepare for. 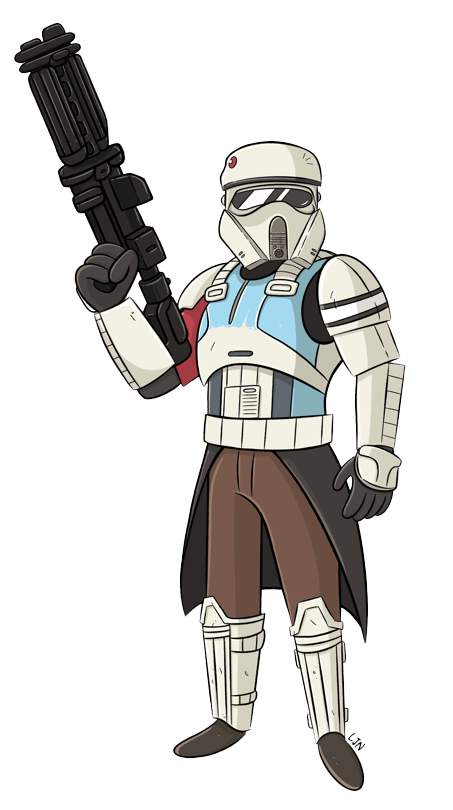 While our shoretroopers are quite efficient and impressive, I feel as though our real pride and joy come from the even more elite death troopers. Hand-picked and selected from the best the Empire has to offer, death troopers are well-armed, extremely capable, and as their name implies, deadly.

After being drafted as a death trooper, one must undergo some of the most intense training the Empire has to offer. Death troopers must always be ready, very precise, and most of all, disciplined; they must be ready to execute the orders given to them under at all cost.

There’s certainly no lack of tools that death troopers can accomplish these orders with either. They’re walking arsenals armed with SE-14R light blasters, DLT-19Ds, and the versatile E-11D blaster rifles. The E-11D has several configurations allowing for death troopers to lay down suppressive fire at long range or explosive blasts at short range with a grenade launcher attachment. Not to mention death troopers are given extensive hand-to-hand combat training, meaning even if you somehow disarmed them of all their weapons, you still wouldn’t stand a chance.

I’ve led all of these forces before in several training exercises for base defense. It’s more of a formality that I’m there, but it gives me a reason to check up on our troopers and see how their training is proceeding. When we do these exercises I bring along a pair of electrobinoculars to spot targets at a distance and give our men strict orders to eliminate any hostiles. Of course, while that goes on, I do a little sight-seeing of the coastline myself, as most of our forces do the work for me.

Of course, we have been known to get surprise inspections from our “esteemed leader” Orson Krennic. Director Krennic considers Scarif like a home to him, despite always being away working to maintain his pet project he hopes to present to the Emperor. He has us do these defensive drills every now and then and will even command the men himself. He definitely presents more aggressive tactics than I would, but personally I just think it’s his ambition getting the better of him.

Today seems like it might be unfolding into one of those days. Director Krennic has called not too long ago informing us he was coming by the base for some kind of emergency. He wouldn’t say what the problem was, but told us to be ready for his arrival. Seeing his shuttle fly in from the sky is always a dreadful sight, knowing I have to put up with his unreasonable demands for the rest of the day. No matter; whatever his emergency is couldn’t be that big of an issue. If we were under attack, that might be a different story. Though Krennic has told me that should he ever have to take command during an attack and tell me how to deploy our garrison, that I would be demoted. Thankfully, I don’t ever see that happening.

Ben Jeatran has always had a passion for Star Wars since birth (he was born on May the Fourth). Combining his passions of Star Wars and writing, Ben has spent a lot of time making narrative stories in the Star Wars galaxy, and has done the same in the scale of Legion. When he isn't writing, he likes to try his hand at painting his figures the best he can, spending way more time hobbling than playing. Ben can be found on the Legion Facebook page or on the Legion Discord under the name "MrBobshadow".