The Road to Worlds – 2020: This series will be a lead up to Worlds(Adepticon 2020) – It will detail new ideas, testing, and general thoughts moving towards worlds. In part I, we’ll detail what I brought to our local RPQ at Huzzah Hobbies in my first bid for qualifying for worlds this year.

For the past year, the Dark Lord of the Sith has been sitting on the back burner due to his high points cost and generally low impact on Star Wars: Legion games. His movement speed and general effectiveness tend to happen at the end of the game and with games being limited to two hours in tournament play it can be hard to squeeze the proper effectiveness out of him.

Those that know me well know that I have played a lot of Darth Vader early in the games lifetime – bringing him to Nova and several other local store events at Huzzah Hobbies – where we have a pretty competitive crowd (At least 3-4 High Command Invitees are at each event there). I abandoned Vader after some frustrating losses at crucial High Command Invite events(Adepticon 2019) in favor of Boba and Veers last season.

With the release of Bossk and a new Organized Play Year ahead of us, the time has come to put the big daddy dark lord back on the table. I have a Regional Qualifier at Huzzah Hobbies this Saturday and I will be bringing Vader back out in style –

Darth Vader and the Crit Lizardz

This 10 activation Vader list is designed in the spirit of Wonder Twins and Veers Boba. It has a minor bid, and I have cut Disarray, Breakthrough, and Clear Conditions.

A few things of note:

The real question we have to answer, which has been started in the above bullets, is how will this list operate?

Before we go into that please take a look at my guide for playing Darth Vader – It’s from the early days of Legion but still holds true for the most part:  https://thefifthtrooper.com/darth-vader-dark-lord-of-the-sith/

This should prime you for Bossk generally – though he works quite differently in a Vader-Bossk list then the examples outlined in last weeks article – so expect some differences.

The Huzzah Hobbies RPQ was three rounds in length. Some interesting things happened that are worthy of note.

I was able to snag Limited Visibility and Sabotage during Turn 0. Turn 1 was a New Ways to Motivate them on Bossk and Vader – Bossk triple moved to within range 2 of one of my enemys vaps that he had exclusively mined with Sniper strike teams and 1 Storm unit. Bossk activated last to ensure that the fog from limited visibility had him covered. I then Turn 2’d Merciless Munitions to clear the enemy off the vaporator. Bossk died in the process, but 2 of my stormtrooper squads swooped in and stole the vaporator because my opponent was too far away. He had to walk into Vader who was hidden behind a wall to get to one of my protected Vaporators. Darth Vader’s lightsaber did the rest.

Darth Vader and the Crit Lizards 1-0

I again was able to snag Limited Visibility Turn 0 but got the shorter end of the Sabotage train as I was red player this time. It was time to test whether Bossk was as big of an equalizer as I thought he was on Vaporators as Red. Turn 1 was a lot of double moves into position due to long march – I played Standing Orders targeting Bossk as I needed to leverage him on Turn 2. Turn 2 was a Reptilian Rampage opener targeting a snowtrooper unit on one of my opponents Vaporators. It was reduced to 1 unit leader and Bossk slid backwards away from enemy gun fire. The snow unit then panicked and ran towards the board edge, setting up a no cover sniper shot for me the next turn. The sniper shot went off and I pulled my army back so that he had to engage Vader to shoot at all of my pieces on turn 4+. Vader made short work of everything that crossed his path.

Darth Vader and the Crit Lizards 2-0

Objective: … Sabotage the Moisture Vaporator (Are you sensing a trend?)

This time it was unclear if I wanted Limited Visibility or not – I forced it because he was forcing Vaporators and I was concerned about my approach. I’ve played Kyle many times and this proved to be just as difficult as normal – Red on Vaps is not where you want to be against the efficiency master. I opened with New Ways to Motivate them on Vader and Bossk Turn 1. He issued orders to Sabine and had her jump on the Vaporator closest to me to mine it. Bossk double moved into range 2 of sabine and opens up. Turn 2 sees Bossk following up with Merciless Munitions and a shot. Sabine is on 1 hp and gets healed back up to 2 – Bossk goes to 1 wound. Turn 3 is Reptilian Rampage vs Explosions – Kyle activates a corps unit and opens up on Bossk in Heavy Cover pushing 1 hit through. My boy Bossk rolls a block. Bossk quickly activates and tosses a 3 crit shot into Sabine, killing her. With his remaining action he backs up with his collected Bounty. Kyle is able to pick bossk off with snipers but I’ve traded up. Sabine costs significantly more than Bossk. At this point I pull my army back and he is forced to Luke rush on Turn 4-5-6. Darth Vader deals with his son while our corps units trade a few times. Each time he was able to kill a unit, I was able to buy one back – staying up on kill points. 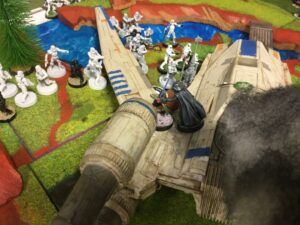 Darth Vader and the Crit Lizards 3-0

Takeaways from the day:

I walked away with an invitation to worlds on my first outing this year. Which was a win in my book even though I had to team kill Kyle to do it. I did not enjoy having to win out at the Last Chance Qualifier last year.

This series moving forward will focus on the preparation and list building process moving towards Adepticon. The next major event I will be playing in will be the Nova Open – Where I’m sure I’ll have some changes to make to this list.

Until next time on the road to Worlds,

May the Dark Side be with you – Always