Concordia is a medium weight hand management and action selection game for 2 to 5 players. Taking on the role of an expanding Roman Empire, players will send colonists across land and sea, looking to develop their economy by establishing outposts and producing goods.

So, why should you play Concordia?

Cards as both engine and victory conditions
Concordia’s brilliance lies in its cards, which act as both actions during gameplay and the end game scoring conditions. Each player starts out with the same seven cards, and will acquire additional cards, with different and better actions, throughout the game. 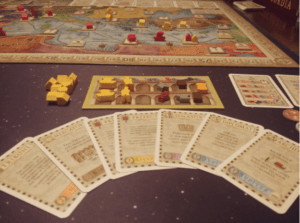 Each card lists one of the five ways to score victory points. Regardless of what happens on the board, points are only scored based on cards in players hands. That means that in order to implement a successful strategy, players must both create the board conditions required and collect the cards that reward the implementation. It’s a small change that makes it unique from many engine building games.

Simple gameplay, complex strategies
Each turn in Concordia is simple: Play one of the cards in your hand, do what it says, and pass to the next player. It never gets more complicated than that. Hell, the rulebook doesn’t even have a staple in it. Yet from this gameplay comes an ever growing branching of choices. I’ve already discussed the cards above, so let’s consider how they impact the board. 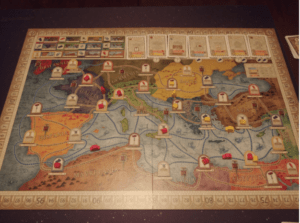 The board is randomly set up, with provinces and cities producing different resources, meaning the puzzle changes with each game. Players will establish outposts in these cities by traveling across land and sea, and paying the required resources. They’ll also be able to produce in provinces, collecting resources to use later when building outposts, buying cards, and recruiting additional colonists. Each of these actions, and more, are done by playing a card from your hand as mentioned above. Having access to every card in your hand lends the game a lot of its complexity. It means an individual player will change the board in different ways each turn. Each action is simple, but it creates interesting and unique pathways for every player.

Concordia also scales very well. Because each turn is quick and the end game is set by players purchasing cards the game never overstays its welcome, even at five players. There are 15 different maps to choose from that accommodate all player counts (two come in the base set and others are available via expansions).

Interesting player interaction
I am a big fan of games that allow players to build their engines without too much negative interaction from other players. And it’s here I think Concordia really shines.

We mentioned above that players can create outposts in cities on the board. Concordia also allows opponents to create outposts on cities that other players already occupy (so long as they pay extra resources to do so). This is the perfect type of player interaction – allowing players to create bottlenecks for opponents without cutting off their options entirely. 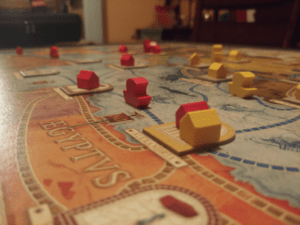 Aside from that almost all of the player interaction is positive. For example, when a player activates a province, opponents with outposts in that province will also receive resources, allowing players to set up mutually beneficial action spaces. In fact, it will often be worthwhile for players to invest resources to follow opponents in order to collect passive resources later in the game. Players also have a diplomat card, which allows them to copy a card recently played by other players. Since all players start the game with the same cards, this means that each player has the opportunity (so long as their timing is right) to take two of the same actions before they need to reset their hand. In the late game, they are also able to copy more powerful cards that were purchased by opponents.

The last ingenious thing that Concordia does is keep players’ scores hidden until the end of the game. We often forget the impact that knowing the score can have on a game. Keeping the score hidden using the cards in players hands allows Concordia to avoid scenarios such as king-making or ganging up on the leader. A player may have a large board state but unless they have the victory conditions in cards in their hand they will not win the game. It keeps the game’s focus where it should be: exploiting the labor of foreign countries for the glory of the Roman Empire.

It might not be for you if…
The box cover is boring, the card formatting is dull, and the theme is barely there. It’s the definition of a “Themeless Euro” so if solving supply chain issues for the Roman Empire doesn’t sound like “your thing”, then it’s best you give this one a pass.

The box art may be some of the ugliest around, but Concordia has it where it counts – it’s beautiful on the inside. The puzzle is engaging, and solving it by playing your cards in the exact order to maximize your engine just never gets old. It scratches that itch that most Euro gamers crave. It’s why you’ll want to play again as soon as you finish. It’s why it’s ranked 17th on BGG. And it’s why so many people, including me, absolutely adore this game.