Hey Everyone!  Here is a Guest Article by my good friend Pat M!  I hope you enjoy it as much as I did!

Crown of Emara is a medium weight, euro style game, for 2-4 players (there is also a solo variant) that plays in about 60 minutes.

In Crown of Emara, players take the role of wealthy Nobles of the nation of Emara in which, under the righteous king, “wars, uprisings, and other inconveniences became a thing of the past” (this is a direct quote from the rulebook…). In order to prove your worthiness, players must convince the King that they hold the best interests of the citizens of Emara by delivering both housing and happiness for them. The player who can provide for their citizens the best will be crowned the next King of Emara.

So, why should you play Crown of Emara?

Each round, players choose one of their three cards, and place it in one of three slots in their player board. It seems simple at first glance, but both the card and the game board provide separate actions, meaning that the first action each turn has nine separate combinations! Add to this the effect those combinations have on the gameboard (more on that later), and you’ll quickly discover a wealth of options that make each choice agonizing.

Adding to the conundrum is the endgame condition. Each player starts the game with a deck of nine cards (drawing three each round). You’ll play all nine of those cards over the first three rounds, then shuffle the deck and proceed through those same nine cards a second time, meaning you’ll only have a total of 18 turns each game (not counting some bonus/free actions that can be triggered). This does two important things for the game. First, it allows all players to plan a long term strategy over several rounds or even the entire game. Second, it gives players the information needed to make adjustments to strategy as needed, meaning you’ll rarely reach a point in the game where you have been locked out by an opponent or have nothing to do.

Once you’ve played a card to your player board, it’s time to execute those actions on the main board, which consists of two rondels, one representing the town, and the other a farm.  Each player has a meeple on each rondel, and is able to move them, either around the field to acquire resources, or through the town to spend those resources on citizens or building points. 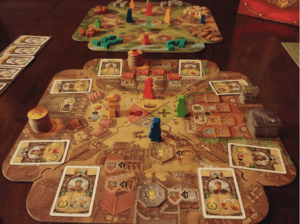 This rondel mechanism adds yet another layer to each turn. Players generally can only move one meeple per turn (with one exception), meaning that you need to plan your turn carefully, both when choosing which resources to produce, and in which order (and how far) to move each meeple.

If that wasn’t enough already, each space on the town rondel has multiple options when landing on the space, sometimes allowing you to do multiple things, and occasionally making you choose from a list of possible actions. The town rondel is the most important board as it’s generally where you will score most of your points.

While Crown of Emara has very little player interaction (a trait I enjoy in most euro games), it does have an element of racing. Each time a player pays stone or bread to the construction location, the amount of victory the next player receives from the action is decreased. On the cathedral location, each donation action means your opponents will have to increase their donation to earn the rewards. Similarly, each advisor players are able to recruit is unique, and able to be purchased on certain town spaces

All of this works to add a push-your-luck element to the game. Pushing quickly for one set of points may mean missing out on an advisor that would have made your engine click. Focusing on the field rondel may increase your resource production in the mid or late game, but will cost you early momentum in the race to complete town objectives. It all leads to a compelling and interesting set of choices each and every game. Do you try to score big points early and risk stalling out later, or do you build a robust engine and risk being unable to convert those resources into meaningful points.

Speaking of points, let’s talk about how you win.

Crown of Emara has two separate scoring tracks, one for building points and another for citizen points. The twist here is that players will only score one of those tracks at the end of the game: The lowest one. This fantastic mechanism means players are not able to win by focusing only one one aspect of the game. Players must instead carefully balance how many of each type of point they earn, adding yet another level of depth to the game

At around $40 (or less – I found my copy for $30), this game is well worth the purchase price. The production value is excellent across the board. The boards and tokens are thick and sturdy, and wooden pieces recycled from other games help keep the cost down. The art and iconography is excellent (at least so far as eurogames go) and easy to understand. Small details, such as different genders on each side of the player board, are an appreciated feature. You really do get a lot of game here for the investment.

While the core gameplay doesn’t change between plays, there is still a significant amount of replay value here. Random event and advisor cards each game mean adjusting strategies each game to maximize your engine’s efficiency.  Puzzling out the best order to play your cards to take advantage of the board state will keep players coming back time and time again.

You like your games to be very thematic. Don’t get me wrong, I enjoy the theme here – working to improve the lives of your citizens adds a nice touch – but ultimately the theme here is pasted on. You won’t really feel like you are working fields, building homes, or donating goods. If you play euro-style games often, you won’t have an issue here. But gamers looking for an adventure, or who like to internally role play during their games might want to look elsewhere.

Light enough to teach to family and friends, deep enough to bring heavy gamers back for more, Crown of Emara is an engaging and elegant puzzle. Currently ranked 845 on BGG (https://boardgamegeek.com/boardgame/256570/crown-emara), Crown of Emara isn’t just one of my favorite mid-weight eurogames, it’s also one of the most underrated games on the market.

-Patrick Murphy is an avid board gamer, book reader, tv watcher, and just generally an all around nerd. Aside from buying more board games than he has time to play, he also enjoys X-Wing, Magic: The Gathering (EDH), and explaining in great detail why you should absolutely read that thousand page fantasy novel. You can contact him at patmurphy1986@gmail.com.-