It’s a Wonderful World is a drafting, engine building game for one to five players that takes about 45 minutes. Taking the role of near future continental empires, players will spend each of their turns drafting, then building seven cards, with each card built providing more resources for subsequent turns. After four short turns the game is over, and the player with the most victory points wins.

So, what’s special about It’s a Wonderful World and what sets it apart from other, more established drafting games.

Redefining the traditional draft format
Many readers will likely be familiar with the normal drafting setup of a game like 7 Wonders. Draft cards, one at a time, and place them in your tableau, allowing you to build bigger and better cards as the game continues. Unlike those games, Wonderful World separates the draft almost entirely from the construction phase of the game. Instead, each round is played out over three phases: Drafting, Planning, and Production. 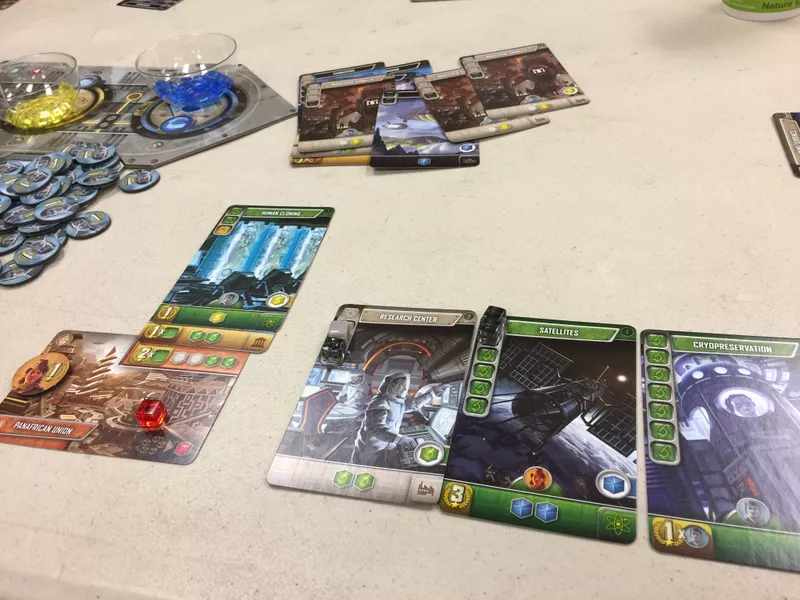 The Drafting Phase plays out like a typical drafting game. Players are dealt seven cards, picking one and then passing their hand to the next player. What’s different here is the cards do not get played immediately to your tableau. Instead, they are placed in front of you until all cards have been drafted.

Next, in the Planning Phase, each player decides what to do with their drafted cards all at once. There are two options: play the card to your construction area to be built later, or discard it for the resource listed on the card. These duel choices open up an important decision path during the first two phases. If you are passed cards that don’t fit your current strategy during the Drafting Phase, you can instead look for a resource on the card that may be useful to you in later phases. Then, during the Planning Phase, that card can be discarded to build cards already in your construction area. Finding the right balance between recycling cards and building is crucial, and an interesting challenge.

The Production Phase is where things really get interesting. Here, players will perform five production steps, one for each colored resource in the following order: Gray, Black, Green, Yellow, Blue (the resources have actual names, but they don’t matter and you’ll just end up calling them by their color). Cards completed during the Gray step are immediately added to your empire. If they produce resources of a color in a later step, those resources will be produced on that same turn. This ability to cascade production effects is key to success. Since there are only four rounds in the game, any players that are able to boost their engine early in the game will be able to accumulate a significant advantage. 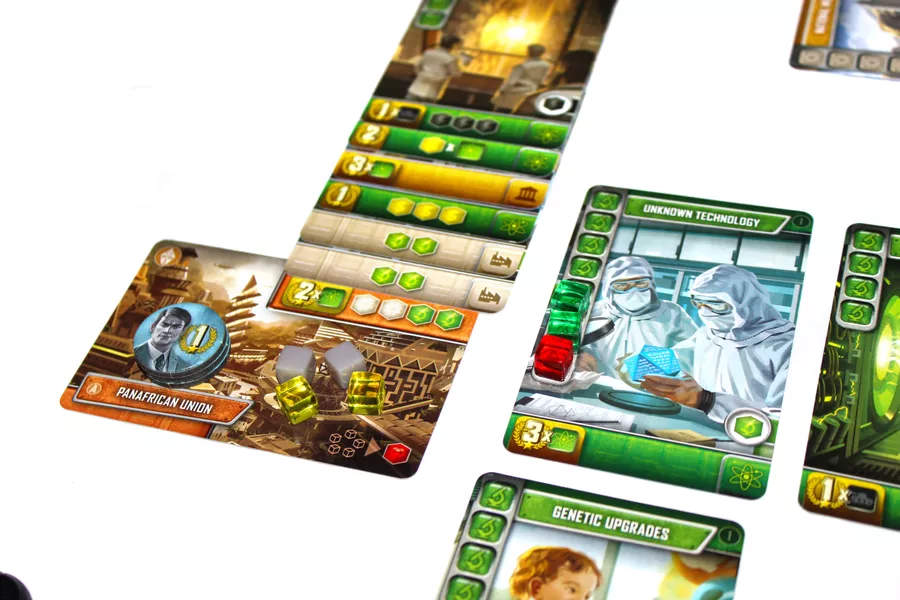 Easy to teach, simple to learn
The rules are so simple they are literally written on the back of the board. That’s how easy this game is to teach and learn.

Set up is easy. Shuffle a deck of cards and put some cubes in a pile. You don’t even really need the board. After about five minutes of setup and rules explanation, players will be able to dive into their first game. Even after the first round, new players will have gears turning in their head. And once that first game is done you’ll immediately want to play again, learning from the mistakes you made the previous game, refining ideas that didn’t quite work, and exploring new strategies.

Superb production quality
Everything about this game is well produced, and fits the style and tone perfectly. Everything feels…shiny, futuristic.

The oversized cards are thick and sturdy. They feel like they will last without having to sleeve them. Each card includes charming art depicting exciting future-things such as GIANT TOWER, MEGA-DRILL, and of course the classic MEGA-BOMB! There’s also the lost city of Atlantis and time travel. The future is serious business. Generic card naming aside (we’ll touch on theming below), the card formatting is great here. Despite each card having full sized art, they still manage to hold up to five pieces of information on them without feeling cluttered. 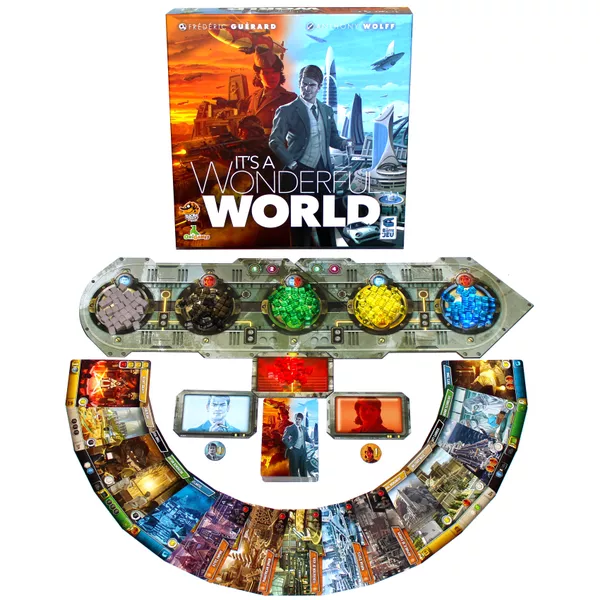 The cubes are vibrant and fit the style of the game perfectly. You’ll enjoy stacking them in a pyramid – what else are cubes good for. As mentioned above, the board is…not required. It’s functional, but it’s there to hold the cubes and not much else.

Despite the high quality production, the game was inexpensive (I got mine for $30 USD). Not every game needs a heavy price to reflect the quality (looking at you Stonemaier Games…).

It might not be for you if…
Despite the art and production quality I mentioned above, the theme is really pasted on here. To say the immersion is surface level would be generous. At no point will you feel like the leader of a great nation. The game is cards and cubes. Play cards, get cubes, use them to play more cards, etc. If that doesn’t sound like it’s for you, consider skipping this one.

Heavy gamers should be warned that this is not a long, or especially deep game. I don’t think this has the replayability aspect needed to hit the table as often as heavy gamers would like either. If you’re the type of player that thrives with long, puzzly Euro games, consider this one an appetizer, not a main course.

Bottom line
It’s a Wonderful World has quickly replaced 7 Wonders as my go-to drafting game. We’ll see if that is a condition that persists – there is a reason 7 Wonders is considered a classic after all. Expansions arriving in Winter 2020 will add needed depth to the game. Regardless of comparisons to its contemporaries, It’s a Wonderful World simply has to be in the collection of any draft enthusiasts.