Welcome to Why You Should Play, a series about board games and what makes them entertain, stimulate, and inspire us.  This series is not focused on reviewing or teaching games. Rather, it attempts to explore what aspects of the game might make it appeal to the reader.

Sentinels of the Multiverse is a cooperative hand management game for one to four players. Each player will pick a hero, based loosely on existing Marvel and DC characters, and work together to defeat the villain. You’ll also pick an environment deck, a neutral set of cards that affect both heroes and villains in different ways. But with so many superhero themed games on the market (including officially licensed ones from the properties above) why should you pick up Sentinels over them?

From the first time you open the box it’s immediately apparent how much variability is in the game. In the base set alone there are ten heroes, four villains, and four environments. Multiple expansions add more of each, with the final, finished game having 33 heroes, 31 villains, and 27 environments. There are thousand upon thousands of possible combinations, too many to ever play even close to all of them. You’ll literally never play the same game twice. 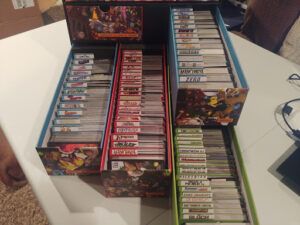 In addition, each Hero, Villain, and Environment has a difficulty rating from one to four (one being the easiest to play/play against, and 4 being the hardest). This makes it simple for new players to jump right in quickly. The level one villains are little more than punishing bags. By the time you face a le    vel four villain, you’ll struggle to simply survive each round. Picking up a level one hero means simple, straightforward gameplay, while level four’s will have complex and

There is no worse feeling in a cooperative game than dealing with an alpha gamer. Outgoing players can push out introverts of the decision making process, and beginners can feel like the game is being played for them. In Sentinels, each player has a separate hand of cards, and they choose from those what actions and abilities to use, meaning alpha gamers can’t simply explain the “best” move.

Now that my passive aggressive soapboxing is done, I’ll point out that Sentinels feels like the best kind of cooperative game. Players need to actively discuss what enemies need to be dealt with and who is able to best execute the plan. It lets advanced players assist the group by pointing out threats, while allowing all players to have an input, and an impact, on how that strategy is implemented.

Adding to that is how often heroes combo off of each other. Chances are, your team will have at least one support hero and several heroes able to deal damage and destroy problem cards. (when it comes to assembling the team, you should listen to more experienced players). Support heroes can buff other players, tanks can prevent and soak damage, control/utility heroes can manipulate the board, and finishers deal damage that most times ends the games. Each hero performs at least one, if not multiple roles, and knowing when to assist another player, remove an enemy threat, or just set a future turn for yourself is vital.

I mentioned above that all the characters are inspired (or just flat out re-skins) of popular superheroes. And the designers have done a fantastic job of making each character’s deck feel like the super hero they are impersonating. Wraith’s (AKA Batman) deck for example is filled with gadgets and equipment. Taycon (AKA Flash) gets “faster” the more cards she has in her graveyard, and is able to deal massive damage late game after she “speeds up”. And Bunker (AKA Iron Man) uses cards as pieces of his suit, upgrading and adjusting it as new challenges arise.

Some reviewers have criticized the art, but I think it’s great. Each card looks like it came right out of the pages of a comic book, including flavor text which references the fictional stories. The art itself is often telling a story, with other heroes and villains appearing in each other’s decks. The game doesn’t take itself too seriously either. Lots of art and flavor text are meta in-jokes (there is even a Deadpool caricature that breaks the fourth wall). You can really tell the people who made this game love the superhero genre. 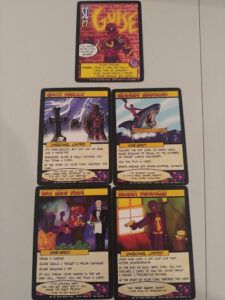 I’ve mentioned the environment decks above, but let’s take a closer look now. Each environment deck provides a setting for the heroes and villains to battle. Cards are drawn from the deck at least once per turn and change the nature (pun intended) of the battle. They can have effects that help or hinder players or villains. They can neutralize or enhance effects on the battlefield. They can even deal massive amounts of damage at times. These decks add to the theme dramatically. Defend a city from attack with the Megalopolis deck. Escape a multidimensional prison with The Block deck. Prowl the dark alleys of crime in the Rook City deck. 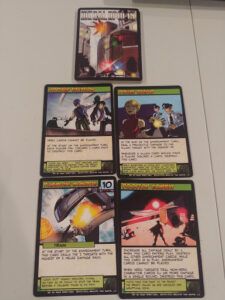 Let’s start with a common complaint. This game has a lot of things to track. Each player will often have multiple cards in front of them (and most heroes have keywords unique to that character). Players will also need to track the villain and environment cards for conditions as well. But damage management is the issue here. Aside from tracking buffs and nerfs to damage output, there are also multiple types of damage (melee, projectile, sonic, etc.), each of which must be noted in case villains or heroes are immune to specific types of damage. Worst of all, players turning to their phones to track the game will be disappointed. The app costs money when it should be free, and on top of that it’s unreliable and doesn’t help alleviate most of the issues around damage. 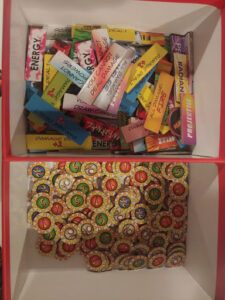 The other major issue some might have is the feeling that they are just not doing enough. Non-turns will happen in this game. Sometimes you just need to set up for another turn; other times you’ll find yourself pinned down by the villain, unable to affect the state of play. Personally, I’ve found playing two characters each (in a two player game) can help alleviate this. It’s my favorite way to play Sentinels.

Fantastic fun, even with its flaws. A blast despite the bookkeeping. Sentinels is a game close to my heart. It’s one of the first games I purchased when starting my board game collection and, as the pictures in the article demonstrate, I’ve invested a lot of time and money into collecting and playing Sentinels.

Players will get the most out of Sentinels if they treat it as a combination between an RPG and a card game. Try not to worry too much about the bookkeeping (or have a friend like me who will do it for you…). If you are the type of person who wants to tell a story while you play, this one might be for you.