Unless you have just recently returned from being lost at sea for the last year, you know that in person cons aren’t really a thing right now.  There was no in person GenCon.  However, they did manage an online GenCon, with an online Legion tournament, which isn’t nearly as good as the real thing but is better than nothing.

Without further ado, let’s take a gander at the top 8.  Places 3-4 and 5-8 aren’t in any particular order, as the second day was an elimination bracket.

These lists are all built using Legion HQ 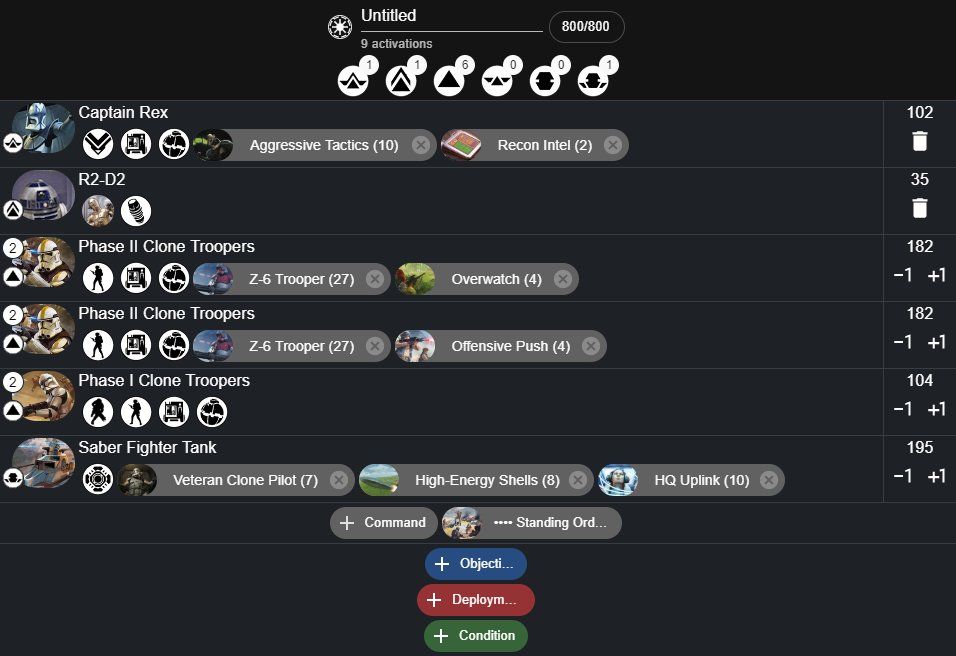 Rex, R2-D2, Phase IIs with Offensive Push and Overwatch.  Plus a giant hover tank, because why not?  All the ingredients for a winning list.

It was nice to see heavies get some representation at the top.  AATs made a splash as well, which we’ll get to in a minute. 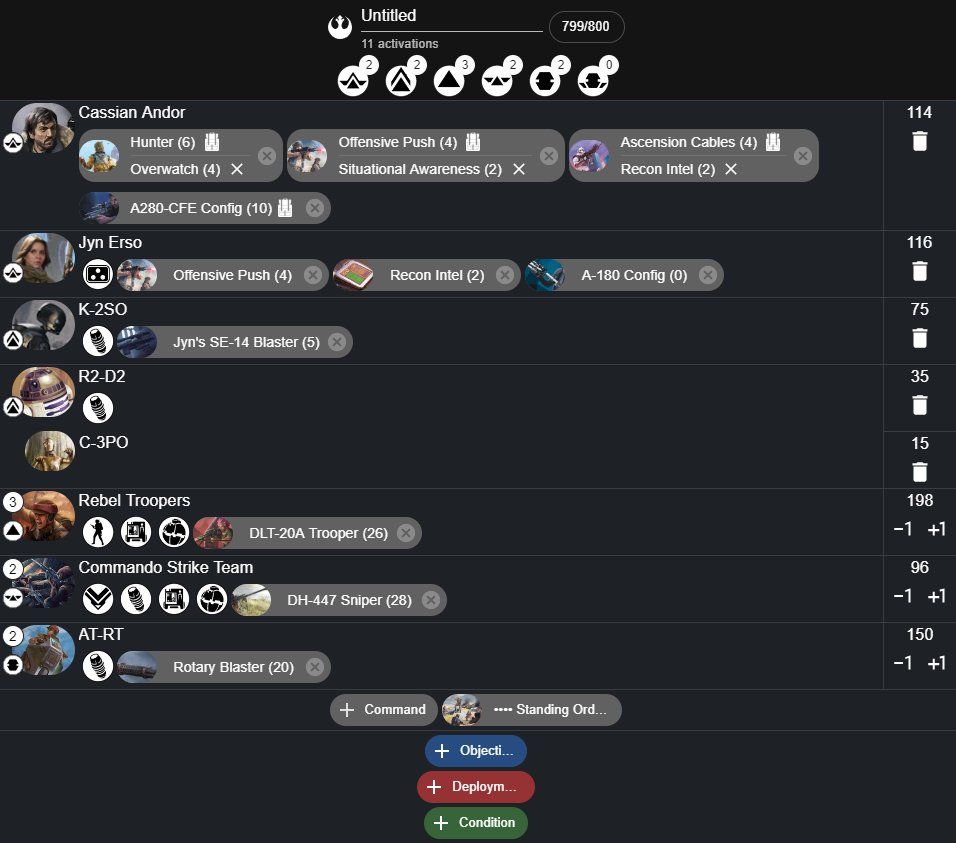 Awesome, look at this thematic Rogue One list.  Jyn actually pairs quite well with Cassian.  Aaron has some decent range 3 fire support in here as well between the DLT-20As and the Rotaries.  I continue to think the DLT-20A is underrated. 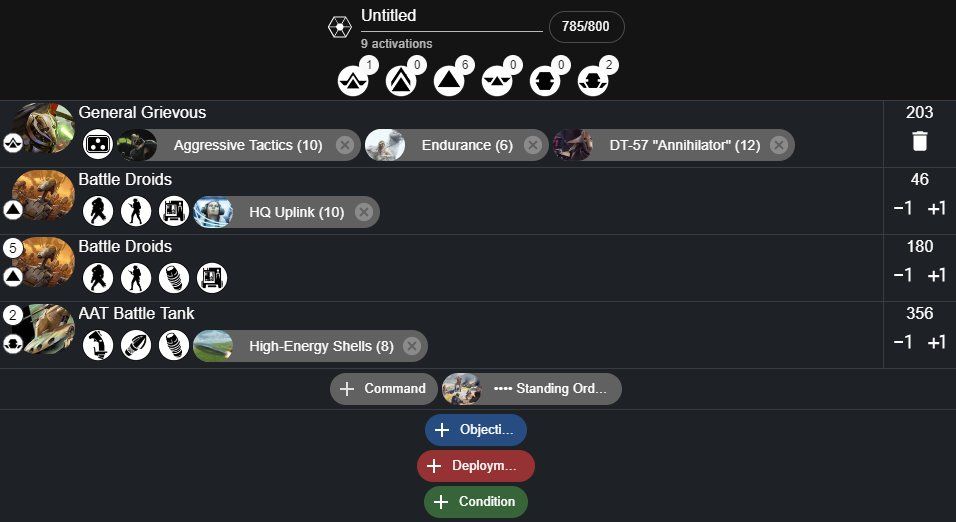 Double AAT, Grievous, a bunch of naked B1s.  Why run one tank, when you can have two?  I like it. 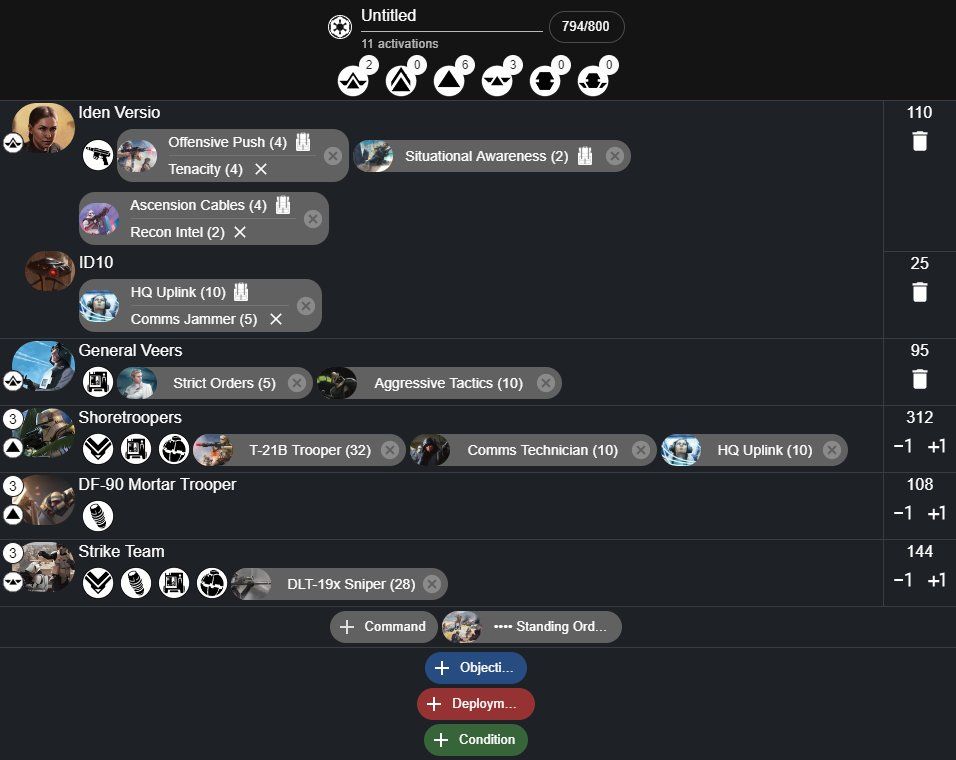 The only Empire list in the top 8.  I personally think this is close to the best version of an Iden list right now.  Veers and Iden slot in really nicely with each other, since Iden has two 2 pips and Veers has… well, he has a two pip, its just bad.

The command cards aren’t on the list above, but Eric didn’t run Tactical Strike.  With no Deathtroopers in the list, it makes more sense to do Coordinated Fire and Imperial Discipline for maximum faceups on the Shores.  Seems good. 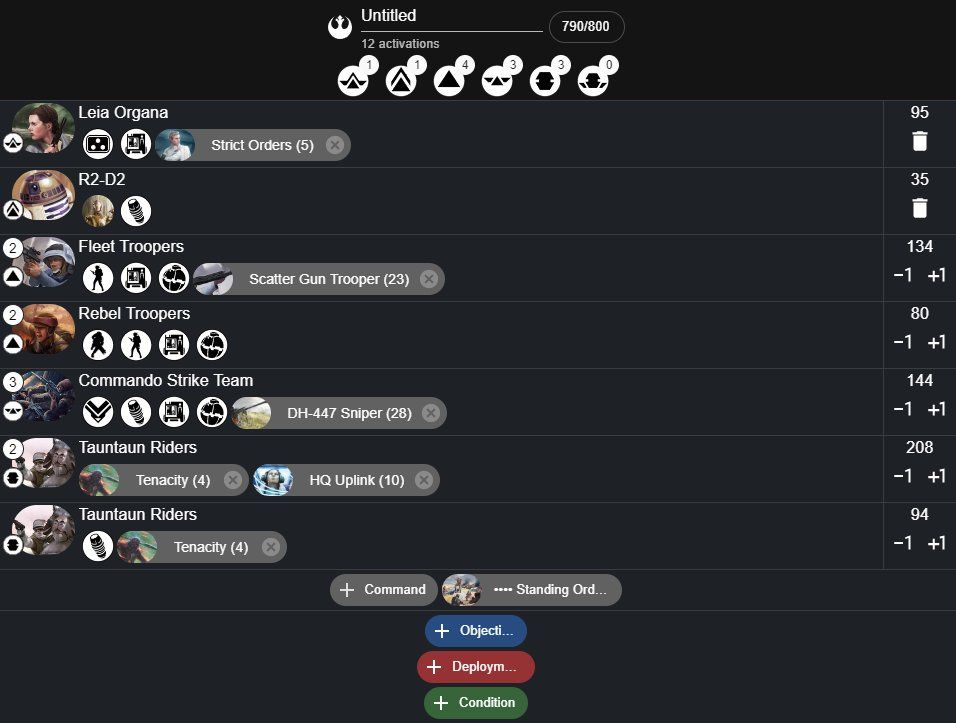 Hey look!  Tauntauns are still good.  How is this 12 activations?  Gross.

Your eyes don’t deceive you.  There are fleet troopers in this list.  Two of them!  I actually really like this tech.  Fleet Troopers always have been and still are one of the most offensively efficient units in the game; they just melt when you shoot them and don’t have a good way to deal with suppression, which is kind of a death sentence on a range 2 unit.  However, Tauntauns generate so much aggro, it puts your opponent on the horns of a dilemma.  If they divert any resources from dealing with the Tauns their army will just get run over, while if they focus 100% on the tauns to avoid getting run over, the fleets saunter up unopposed and shotgun some fools. 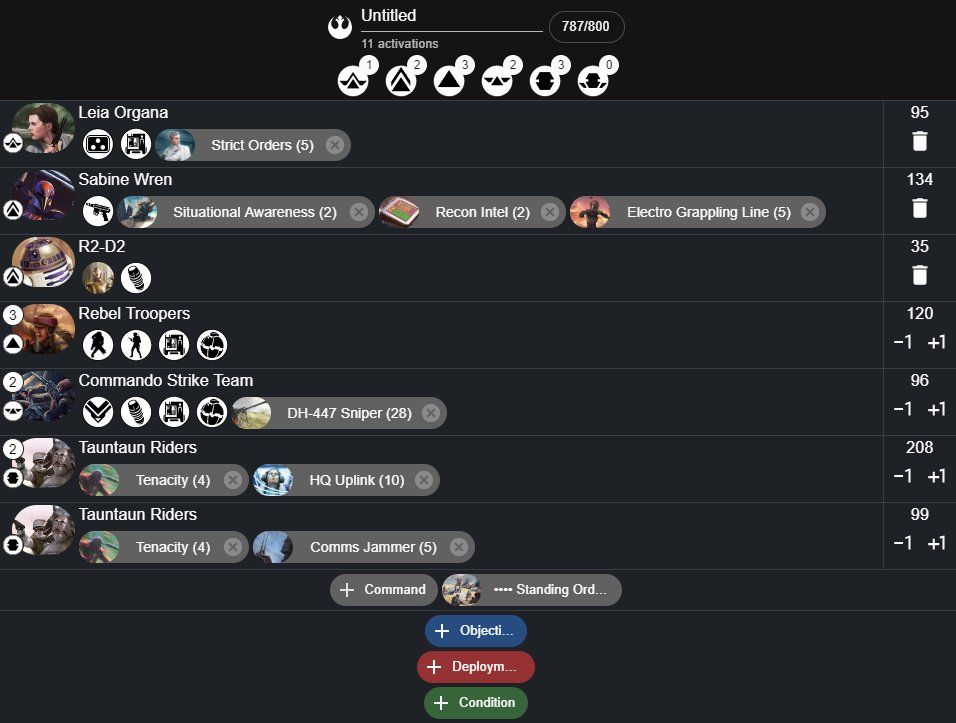 Revenge of the Tauntauns, part 2.  Chris has gone with a more traditional version with Sabine in there. 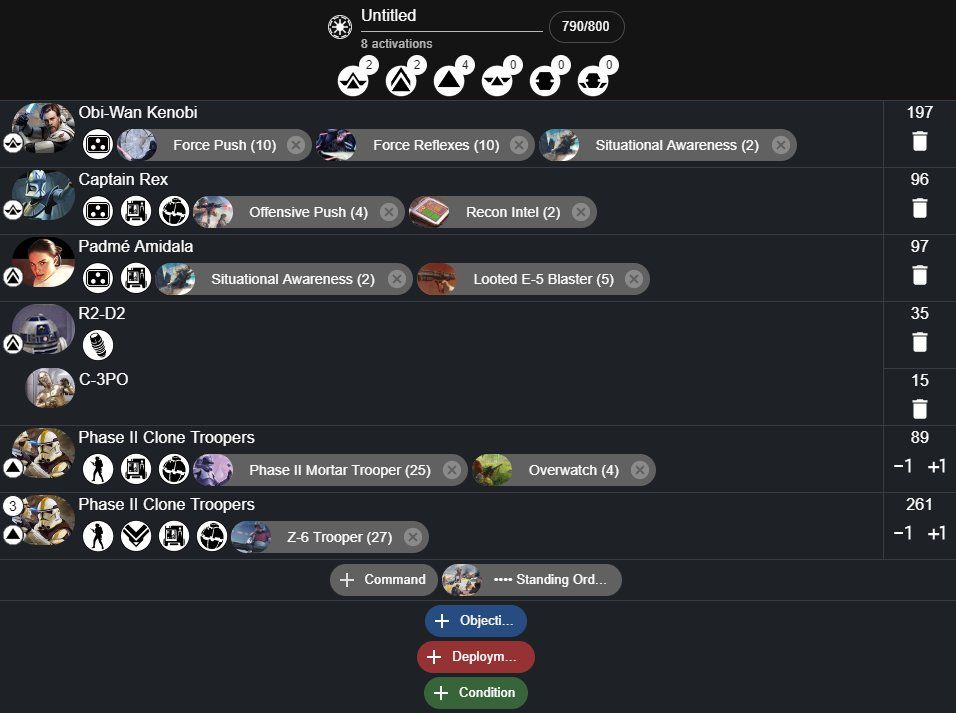 Republic herohammer.  I’m much too scared to play an 8 activation list myself, but clearly it has some play in the hands of someone that knows what they are doing.  This is very close to what JJs Juggernaut (aka, Josiah, above) took pretty deep into Invader League single elims. 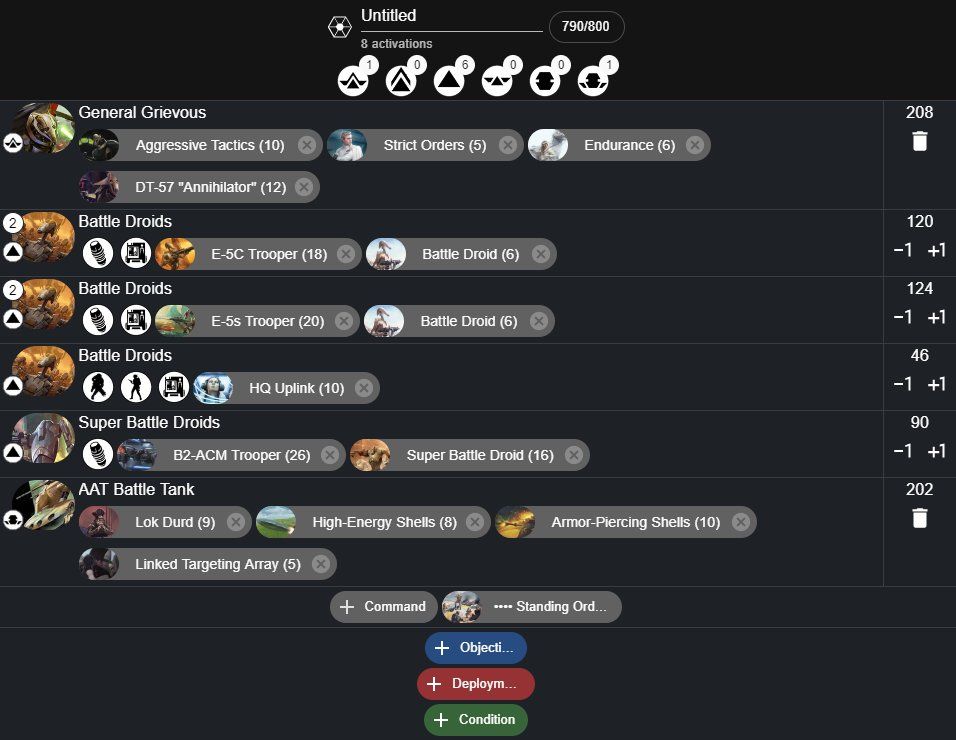 This is a more “traditional” AAT list, where you balance one tank with some core beef.  I like the B2s in here as a close range threat.  B2s are underused but can really smack you if they get close.

Hope you enjoyed are look at the GenCon Online top 8.  With the ARC and BX droid releases on the horizon, I think it is safe to say the next one of these will look a little different.