Star Wars: Legion has a great way of representing armies that are well coordinated and armies that are not. A commander cannot be everywhere at once, and some troopers have more discipline than others. Every round, a commander issues orders to a few units, their tokens are placed face-up near them, and the rest of the army’s order tokens go into the Order Pool face down. As the game progresses, you can voluntarily activate a unit with a face up order, or draw a token at random from the Order Pool.

Legion is a game that rewards timing, and this is the primary benefit of issuing an order. If orders are not issued to an important unit, there’s a chance they may activate at the wrong time, reducing their effectiveness (sometimes to zero). In this article, we’ll talk about orders, timing, and three methods to gain better control over your army. In general, orders are a finite and valuable resource that have to be managed. There are upgrades and keywords that allow you to create additional orders, which we’ll cover later in this article. For now, let’s continue to explore this initial idea of orders as a resource.

Strategic thought: we want to reduce randomness where possible.

Units that are fragile or essential to the army’s success need orders to be as effective as possible, but good timing isn’t the only reason to give orders to units. There are upgrades, keywords and Command Card effects in Star Wars: Legion are that give bonuses if you have a face-up order. Target 1 gives Shoretroopers an Aim token just for having an order. Units like Sabine Wren, with her courage value of 2, are protected from suppression by Strict Orders. Command cards like “My Ally Is The Force” and “Take That, Clankers!” also rely on the presence of face-up order tokens. These benefits are limited by the availability of orders.

Units that need orders to reach their maximum effectiveness are “order hungry.” Let’s take Droidekas with the Linked Targeting Array (LTA) upgrade as a basic example.

These Droidekas want orders to get the aim token from the LTA’s Target 1, and they also want to go early if they attack to apply their Suppressive keyword before an enemy can rally. If they have a face-up token, they may also be selected for Aggressive Tactics to convert offense surges. On the flip side, no face-up order, no bonuses.

Having too many units like LTA Droidekas in your army is generally a problem – if they can’t be given orders, they won’t be very effective and may end up wasted. Ideally, you’ll want a healthy mix of order hungry and order neutral units. This begs the question, “What makes a unit order neutral? Lust for gold? Power? Or was it just modeled with a heart full of neutrality?”

An example of an order neutral unit would be a unit of Stormtroopers with an RT-97c or DLT-19. They have no timing-related abilities, are able to hit out to Range 4, and Precise can apply to aim tokens taken on their own turn. As long as they are within Range 3 of a Commander to boost their courage, Stormtroopers are otherwise fine without an order. The same could be said for DLT-20a Rebel Troopers, or even Phase 2 Clone Troopers.

While orders from Command Cards are limited, we’ll talk about three ways to circumvent the limitations and achieve perfect (or nearly perfect) activation control. 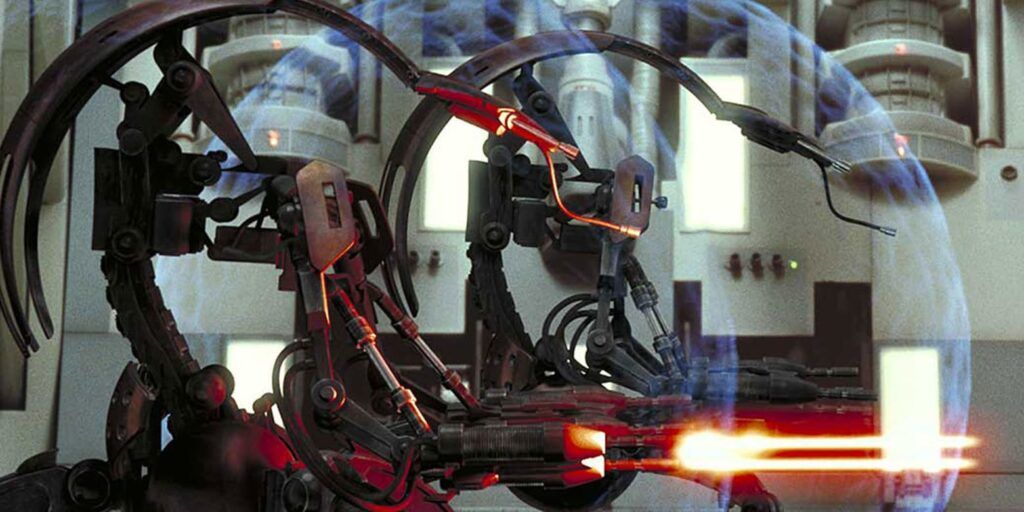 This method involves applying what we just learned about order neutral and order hungry units. You can avoid the problem of having too few orders by only allowing order neutral units to be in the order pool. In addition, you can add a further measure of control by having more units of the same type. By having more units of the same type, you’ll be more free to choose precisely which units to activate. Building this way is common in Rebel lists, which don’t have a lot of good ways to issue orders en-masse.

The first list has too much variation in unit types. On any given draw, you may be forced to activate a unit of a particular type, when the next best possible move might have been with a unit of a different type. By having an order pool that is too varied, you lock yourself out of making those better choices. There’s a chance that the presence of two operatives may also be a problem – Operatives tend to want control more often than not. That said, there are operatives out there that can issue multiple orders.

The second list, on the other hand, issues orders to the two commanders and operative, and is then free to draw from the order pool and make the best possible choices with its remaining order neutral corps and special forces. While it doesn’t beat perfect control, it’s about 98% the same – you’ll be able to make the best decisions about what to activate just about all the time. That said, perfect control is possible, so let’s find out how it’s done:

There are two exceptionally powerful tools available to certain units that can create perfect order control: HQ Uplink and the Coordinate keyword. HQ Uplink allows units with a comm slot to issue orders to themselves. 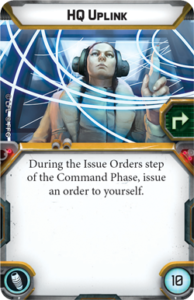 You can control additional units on those turns where you would play a low pip card and only control one unit. Uplinks are common on supports and special forces, where that additional order control can really shine. Units that are planning on using the Recover action also add an Uplink to enhance the value of that action. The best example of this that I can think of is the Republic Saber Tank, using the Veteran Clone Pilot, High Energy Shells and an HQ Uplink for an extremely high value Recover.

Uplinks can be coupled with the Coordinate keyword to spawn additional orders. The entire Separatist faction has this idea as the mainstay of their identity – a large number of units in their army have the ability to pass orders to other units, who can then spawn additional orders in a chain. It’s fairly common to see B1 Battle Droids equipped with an HQ Uplink to use on turns when heroes like Grievous and Dooku want to play their low-pip cards. For more on the Separatist faction, including an illustrated guide to this concept, see Jay’s article on the Droid Army.

An extremely strong example of both concepts in action can be found in this Iden Versio list. A list similar to this got to the Semifinals at Gencon Online, but was ultimately eliminated: 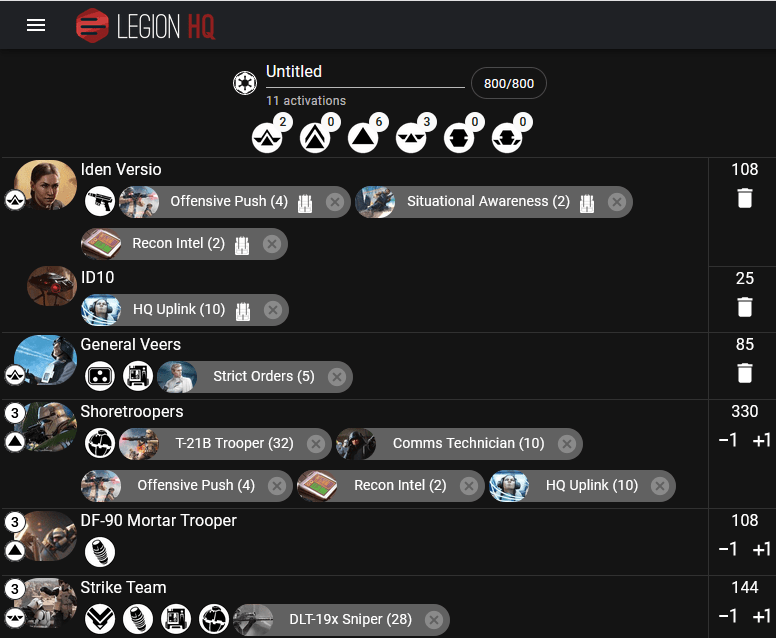 By paying some extra points for HQ Uplinks and Comms Techs, this Imperial list is able to get an extremely strong Coordinated Fire turn, giving orders to the three Shoretroopers and coordinating to their respective mortars. On the following turn, it would play Imperial Discipline, creating near perfect control and only missing tokens on the strike teams and one shore, and later on have those Uplinks available for Iden or Veers 1-pip. In the meantime, Iden stays under control. In addition, the proliferation of orders multiplies the benefits of Strict Orders hugely.

This method is an extension of the first method and extremely common to Separatist armies, and a way to get perfect control. It is possible, through issuing orders to the correct units, to ensure that only one token type remains in the order pool. From a timing standpoint, these remaining units in the pool function as though they had been issued orders. 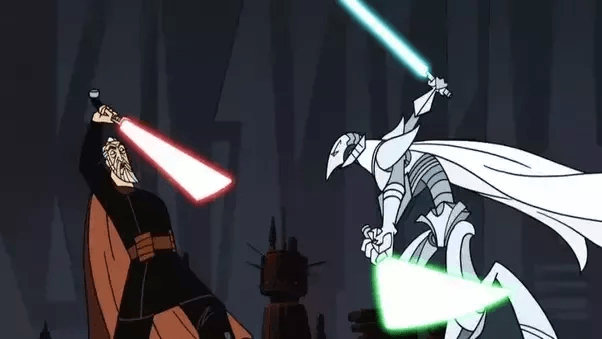 The best example of this would be the old “Double the Fall” list that was popular when Clone Wars was first released. By using Coordinate on the B1 battle droids, only Commander tokens would be left in the order pool, granting perfect control. This can be used for any token type – for example, a list with General Grievous and 3 Droidekas (without LTA) could issue orders to Grievous and all the B1 Droids, leaving only Support tokens in the order pool. When Grievous used his command card of the same name, he would draw a guaranteed Commander token out of the order pool and go first anyway.

I’d be remiss if I didn’t mention Emperor Palpatine’s “An Entire Legion” card that hits all eligible units in his command radius in this section. It’s a fairly simple card to understand, but if you strategically place only one type of unit outside of Palpatine’s command radius, you still get the timing benefits of the card via order filtering.

Alright, that was a fair amount of info – now it’s time to apply what you’ve learned in your games. I hope this leads to some victories or plugs some leaks in your play. Thanks for reading, and if you liked this article, you could help me out by sharing it with your fellow Legion playing friends.