Hopefully a few weeks ago you took a gander at Mike Syrylo’s post in regards to identifying my Rex/Obi-Wan list as a part of a series we wanted to run. If you haven’t done so, I suggest you follow this link (Rex and Obi Wan) to read the first segment before continuing on with my follow up here. The idea behind this series of blogs is to discuss the importance of understanding your opponent’s list in a copious amount of ways. The focal points are archetypes, strengths, weaknesses, counterplays and what we’re calling wildcards. My list that Mike dissected was a nine activation Clone Army and the list that Mike played, that I will dissect, was a very interesting EIGHT activation Confederacy of Independent Systems list. His list is actually what sparked the idea in my head to start a series such as this because of how unique his list functions. 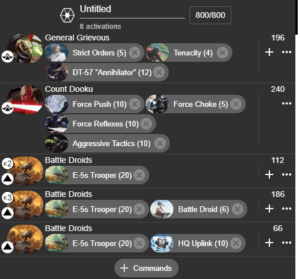 Much like any new faction that is just releasing, the best component of your list is going to be your corps. The most important thing about droid armies is their ability to mass produce “bodies” on the table that make it difficult to chew through. However, Mike’s list doesn’t have as many bodies as most droid lists will be putting out there; but that comes with a purpose. Adding in six of the E-5s Trooper allows Mike to sacrifice some extra droid bodies in his army because he effectively extends the range of his entire army from range 3 to range 4. Not to mention those E-5s droids roll a consistent dice pool of 1W/1R and Critical 1. More often than not you’re at least applying suppression to your opponent, and as someone who plays the clones that’s not good for me, and a lot of the time you’re getting a critical through cover (and guardian) and forcing your opponent to roll a defense die anyways. The long range game also allows you to move the two aggressive units in the list, Grievous and Dooku, into optimal positions. All of these strategies stack upon perfect order control, the main theme of the droid army!

Ironically enough the wildcards in Mike’s droid army are the two commanders in General Grievous and Count Dooku. The reason they are wildcards is because of their command cards which, in my opinion, mesh extremely well with how this list wants to function. In reality, you want to get into range to shoot the beef of the army (the hoard of droids) or perhaps get into range of Grievous and try to suppress him. However, if you do this your putting yourself at risk of Dooku double moving to choke your heavy weapon or set up a first activation (who decided to give a Sith lord cunning?!) force lightning to scatter you out of cover and then finish you off with something else. This was actually something Mike was setting up in his game on my Rex but I read it and decided to throw Rex’s one pip command card in order to get into safety. Was it the best use of the one pip? Not really, if you are thinking in a vacuum, but keeping Rex alive was well worth throwing it down with Dooku trying to hone in. 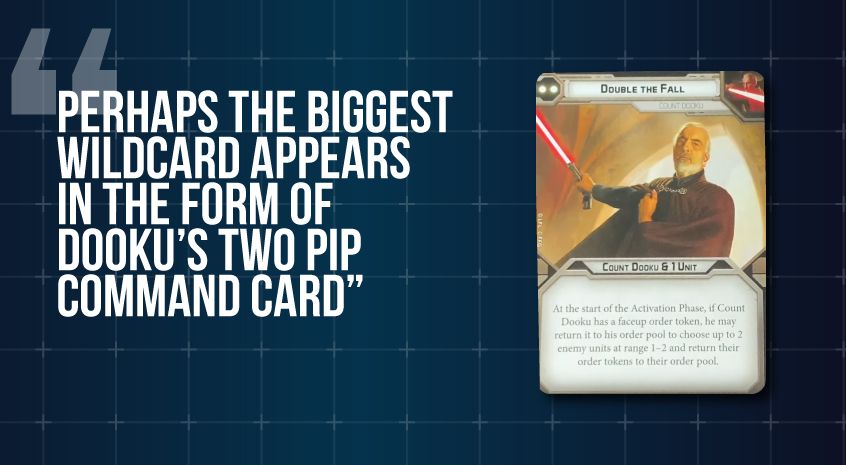 Perhaps the biggest wildcard appears in the form of Dooku’s two pip command card shown above. The reason this is card is more of a wildcard than his one pip, which is also very good, is the fact that it basically will ruin any plans that you have going, especially if those plans involve orders and faceup tokens. If you expect your opponent to play this card you should have the awareness to play a three pip or something to ensure you don’t waste your one or two pip cards, which tend to be more important. Tossing your order tokens back into your bag will be a big feel bad moment say if you play “Hello There” or “Call Me Captain” at a crucial moment.

Keep in mind this counter play is strictly in the eyes of the Republic, as I think Rebels and Imperials have more tools to counter the list with at the moment. All that said, the more you start to play against the Droid army the more you get used to their deployment. Knowing that your opponent needs to spread out in order to have the sufficient amount of space to deploy and ensure that they capitalize on the “Coordinate: Droid Trooper” keyword. Once your opponent is finished with deployment, I think a great counter is to try and wipe out the HQ Uplink set of droids as soon as you can. I found myself throwing Rex’s two pip command card “Take that, Clankers” round one in this situation. 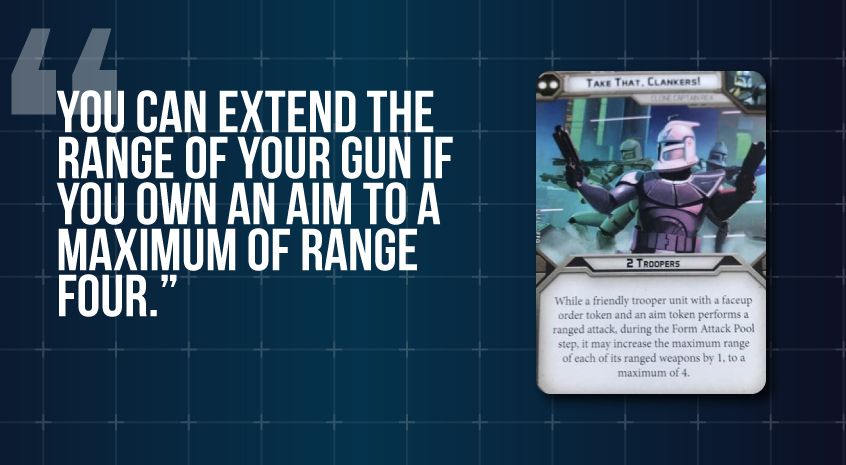 As you can see looking at Rex’s Command Card, you can extend the range of your gun if you own an aim to a maximum of range four. If you can take out a droid unit early not only are you going to put your opponent down to seven activations but you’re also going to disrupt their perfect order control. It’s a list that requires your opponent to make no mistakes because if they do you make them pay for it. You need to do your best to put your opponent on their back foot and force them to make that mistake. If there’s anything I have learned in my first year of Legion it’s the fact that you can dictate the game and how your opponent plays by making a decision that forces them to react. Some great examples of that kind of thinking are located in Episode 50 (insert link) of the Notorious Scoundrels Podcast. The tricky part of putting your opponent on their back foot with a list like this is going to be entering range 3 of the meat of their army and somehow avoiding Grievous and Dooku for as long as you can. That’s no small feat, but if you find the opportunity to do it you grab it by the horns and run with it.

In my opinion, every list has a weakness, there is no such thing as a perfect list because there are simply too many variables when it comes to Legion. I think the flaws of this list are pretty apparent and it’s up to your opponent to play as good of a game as they can with this list. The reason I say that is that this kind of list can have the penultimate snowball effect once one thing goes wrong. If you can disrupt “Coordinate” or they misplay Grievous or Dooku and leave an opening there for you to take one of them out early, things will unravel fast due to putting so much emphasis on the two characters and having what we consider a low activation count for competitive Legion.

I’m not too sure how often you’ll find yourself playing against this exact list, however I hope this a good guide to try and get yourself in the right mindset when facing such a task. With the new factions just making their way to the table, as well as the new commanders in Rex and Dooku, it seemed fitting to start here when discussing the analysis of your opponent’s army and how it functions. Going forward with this topic, I’ll most likely jump on the opportunity to touch upon archetypes like aggro, in-your-face lists (Triple TaunTaun, Luke/Sabine), your standard Imperial gunline style lists, and vehicle skews as armor is making a strong splash in the competitive scene at the moment. There are a lot ways lists can function and I find it imperative as a competitive player to learn the nuances of as many of those lists as you can. I hope I can help you, the player, take the next step in your competitive play by breaking down as many of these archetypes I can to the best of my ability! May you pass many green tokens in the meantime, commanders.