You have your Commander(s) and your Corps units at the ready and it’s time for Special Forces….What do you do! The good thing about the Spec Forces is that there are some really good options out there. Strictly speaking in terms of the “meta”, snipers are still king. That, however, doesn’t mean you won’t want to take the other options. The great thing I love about this game is that there’s no such thing as an “auto include” in any list, really. A lot of things are competitive. Some are held in higher regard than others(Snipers) but again they’re not automatic. You are limited to taking three in a legal 800 point list, keyword Entourage excluded.

We’ll start with the first Special Forces unit to come out in the game with the Commandos. Focusing on them specifically as the unit first, they’re honestly underrated as a whole. Why I say that is because of the Strike Team, which we’ll get to in a minute, costing less and being efficient. A four man squad with courage value of two, low profile, scout two and sharpshooter one can really do a lot of work. At a sixty point base they’re priced according for what you get and surge to hit on offense is very nice as opposed to say the Rebel Troopers who roll the same dice….minus all the key words and surge. I really need to get a fully loaded Commando team(with a sniper) on the table soon. It’s just finding the extra points to do that is somewhat difficult. I haven’t really used the Proton Charge Saboteur, so my focus will be on sniper teams.

This will be the more common way to use the sniper. At a point cost of forty four total, you won’t find a unit that is as effective for it’s point cost than a sniper strike team. They still benefit the keywords as a full team, even as just a two man unit, and can shoot across the board basically. Most of the time you’ll want them in high ground for line of sight tricks and behind some cover to give them heavy at all times with Low Profile. High Velocity and Pierce really go a long way, as well. Competitively speaking, two to three teams of snipers is what a lot of lists will be bringing. They’re just too good for their cost and what role they fill. They are, of course, susceptible to Leia’s Coordinated Bombardment so if you see her across the board: beware! Typically you’ll run them barebones unless you have some extra points to toss around. Sometimes I’ll put grappling hooks on them just to have  but they seem rarely used and I have cut them recently.

A real beginner tip from a beginner and it’s something I learned while perusing the Discord channel. Your sniper miniature is your leader and the spotter miniature is just a regular miniature. If you leave the spotter in heavy cover somewhere and get the sniper not in cover, you still fall under the 50% rule and have heavy cover. Use it to your advantage!

I wish I had more to add in on the Saboteurs, and I intend to play them at some point. I think they’re pretty solid on the face of things, it’s just getting them into that 1 range.

I’ve only used the Wookies once and that was in the special Deep Jungle operation a few weeks ago. After that game, I realized I should have been finding a place for them in my lists. Now I have the Pathfinders and don’t really have the space at the moment for them but that may change. They’re a big time melee unit with a good health pool to be able to help them get down the field. Their biggest down fall, and it’s a pretty big downfall, is their defense. They roll the white dice, typical for Rebels, but they don’t surge either. They arguably have the worst defense in the game. Tenacity seems to be an auto include upgrade with these walking carpets because odds are they’ll suffer some wounds before getting into your face with some Ryyk Blades. They’re a base point of 75, which actually isn’t too bad. But they do have an upgrade that you’ll want to take if you’re running one set of Wookies.

The Bowcaster Wookie comes at a ten point over the other Wookies cost, but rightfully so. He’ll give you a threat as you move into range for melee with a 1-3 ranged attack. If you happen to get into range 1-2, don’t forget that Pierce 1 will go into your entire dice pool which is nice. Adding two more black dice in melee and three more health points to your pool is nice, as well.  I think most people tend to run the Bowcaster with one unit of Wookies, but I have seen some run two sets of naked Wookies as a complete melee unit only. Which isn’t all that bad when they only cost 75 as opposed to 110 points, 114 if  you include Tenacity.

This is where things get rather interesting. The Rebel Pathfinders are a new unit and seem to have a mixed bag of reviews across the board. The argument of using Pao or Bistan has been a big interest in the topic. And,of course, how to use them with Infiltrate. I have a few thoughts here, and whether they’re right or not I won’t be able to tell you, it’s just my opinion on them after playing with them in four games so far. Lets start with the basics and their keywords since they bring some new elements to the game. Danger Sense 3 allows them to add more defense dice when defending pertaining to the amount of suppression tokens on them. So far, in my games, this has been extremely useful. Keeping units alive is always a good thing, but if the Pathfinders are in a good spot, they can really be a thorn in your opponents side. Dauntless is really good on these guys for  multitude of reasons: 1- any free action is a good action and 2-Pathfinders love suppression….well, to a point. I did have them panic off the board last night in a game. But it was also round four, and they served their purpose. Infiltrate is the most interesting of the group because it allows you to deploy anywhere on the board outside of range 3 of your opponent. Choosing when and where to place them can be tricky and it will probably be relevant to whatever game mode you get. Me, personally, I use them as a deterrent and try to evoke my opponent to focus on them rather than something more important. Another way that has been talked about using them is objective based, specifically dropping them on the middle box on Recover the Supplies. I haven’t played with them yet with Recover, but I like the theory and look forward to trying it out. Duck and Cover is a must include and I highly suggest HQ Uplink and Recon Intel.

This has been the hot topic. Who is better? What if I told you both are good and Bistan may end up being better when more vehicles drop?

The Pros to Bistan is that dice pool at range 1-4 and the reason for that is because you can bring the A-300 Long Range Confifg(listed below) and have a range 4 Z-6 shot on your hands, which is pretty dang good. Impact and Ion don’t matter too much at the moment, but may down the road. The cons to Bistan are that he’s 10 points more than Pao on an already expensive unit and he exhausts. As previously noted in other posts, exhaustible weapons are not the best. Using an action to recover can be less than ideal. That said, you may be recovering HQ Uplink or your weapon configuration anyways, which in turn would recover Bistan too.

The Pros to Pao is that he costs less, shoots a red and a white at range 1-4, isn’t exhaustible and gives you Inspire 1. His cons….I guess would be that he tosses less dice than Bistan and doesn’t have any keywords to aid the gun. Right now I’m running Pao, but I did run Bistan for a game and enjoyed it.

Their gun configuration is a good add to the list at 6 points. While their 1-3 gun of two whites per mini in the group is good, I do think the short range config if you’re in range is the way to go. The long range config is built for you to be able to take those long shots on your opponent as they move up the battlefield, which is also very, very useful. I think the Pathfinders are  very versatile and I like them a lot as a unit.

Picking and choosing your Special Forces will all be relative to your play style! You may want to get down and dirty with the Wookies. You may want to hang back and shoot some sniper rifles. Maybe you want to run those Proton Saboteurs into your opponents face and detonate the charge. If you don’t like those options, Infiltrate on ’em!!! Right now, personally, I’m running Pathfinders with Pao, Recon Intel, Duck and Cover, and the gun configuration with two Sniper Strike Teams. Sniper’s really are the go to and close to what would be considered an auto include in the competitive world but again that’s all relative to play style!

Someone did ask me when we’ll see the Imperial side of things from my beginner eyes and to answer that: As soon as I’m done my awesome, wonderful Rebel “terrorist” side of things! I promise, Imperial players it’s coming! You’d think as a Thrawn fanatic I would play Imperials but the jokes on you! That said, if there is anything specific you want me to get after in the future let me know! Constructive feedback is also welcoming! I’m new-ish to the game and new to blogging so this is all a learning process! Hope you enjoy! 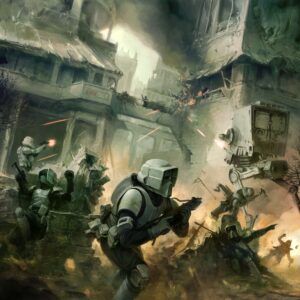