“Hey! How’s it going?” I ask as I notice a person standing to the side of the game table.  “Good” they reply as they stare at the ATST on the battlefield. “This is star wars legion! Have you ever heard of it before?” I question.  “No, what’s it like?” they ask back. 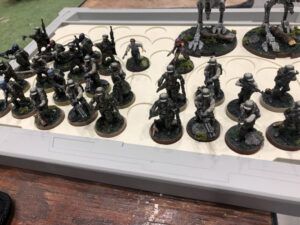 That is a very short interaction that happens almost every time I play legion in my local game store.  A person walking by to look at comic books or Warhammer models will notice always notice a Star Wars game being played and want to take a look at it. As with all hobby games (ones you have to build and paint) nothing really does the game justice until it’s put together and painted on a table.  It’s the iconic units/heroes that people can recognize that draws attention to the game. I really enjoy Warhammer 40k/Age of Sigmar/Underworlds, but if you are not familiar with the franchise, it’s hard to get the people to stop and take notice. What Legion really has going for it is the Star Wars license.

So what does that mean for you? This series of articles will help give you ideas and strategies to attract new players to the game, or if nothing else, get people talking to you about the game.  The next few bullet points are just things that have worked for me:

So, here are some of my closing thoughts.  The more people we have playing the game, the more ideas and bigger community we create! Doing the things I listed above are good ways to help break the ice for people on what the game is all about. The Clone Wars is going to bring a huge influx of new folks on it’s own, but a lot of people still won’t even know the game exists so awareness is going to be key.

That about wraps it up and remember this is just a simple primer on getting new players interested and expanding this game that we all love! Let me now how your experiences have been: How do you get people interested in the game? Have you tried something above? Did it work/not work for you?

Let me know, I would love your feedback!