Greetings, and welcome back to the third entry in Outer Rim Tactics: Cover! Perhaps nothing in Legion is so commonly confused, asked about, and pondered than this mechanic, and my goal for today is to help break down the idiosyncrasies of the rule while providing some advice and strategies for how to best take advantage of cover. Without further ado, let’s jump in.

The first section of this article will include the very basics on cover: what it is, how it functions, how to obtain cover, etc.. For anyone familiar with the basic concepts, feel free to skip ahead to the second section that includes examples and more complex situations. For the other entries in the Outer Rim Tactics series, check them out here!

First, let’s define what cover (RRG pg. 27) does and means in Legion. Cover is increased protection for units being targeted by a ranged attack in Legion, and comes in two different forms: light cover and heavy cover. This protection comes about in the form of cancelling incoming hit results rolled by an attacking unit. Light cover removes one (1) incoming hit and heavy cover removes (2) incoming hits. As we will discuss later, critical hits are not affected by cover.

So now that we know what cover does, how do we obtain it? Simply put, cover is granted by terrain pieces, suppression tokens, some kinds of troopers, and vehicles located in between an attacking unit and its target.

You’ll notice I didn’t list any kind of buildings or custom terrain here. It is up to the players’ discretion to converse about what terrain provides what level of cover before the game begins. Examples can be found in the RRG however, and there are a few charts beginning on page 8 that are useful for making some terrain decisions.

How to Determine Cover

So far, cover seems pretty straightforward right? If there’s something in between an attacking and defending unit, cover is granted. While that statement is true, determining whether or not a terrain piece comes into play is not always simple.

The third step is to determine whether or not the obscured mini’s have cover. According to the RRG pg. 28, if at least half of a unit’s minis are obscured, then that unit has cover. Once the cover is determined to be present, you assign it either the role of light or heavy cover. This determination is made before the game even begins, and follows the examples I discussed above.

Let’s look at a real example to clarify this wall of text. 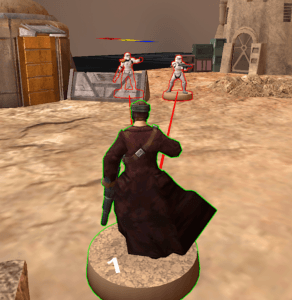 As regular readers and listeners may know, Jay and I are not fans of TableTop Simulator. However, it is a wonderful tool for providing examples, especially when it comes to cover situations.

Using the example provided above, this rebel trooper leader is shooting at the two stormtrooper minis that comprise the opposing unit. The first step we check for is obstruction. As you can clearly see, from the position of the rebel trooper’s head, the stormtrooper leader is obstructed by the barricade because part of its model is physically blocked. However, the other mini on the right hand side is not obstructed in any way by the barricade, as the entire model and base is visible.

The second step, drawing the 2D lines, is miles easier to comprehend on TTS. As you can see, the 2D line crosses the barricade for the leader but does not for the second stormtrooper mini. Therefore, 50% (or at least half) of the defending minis are obstructed, and heavy cover is provided by the barricade.

And now comes the reveal; when I tell you not all is as it seems. Cover is one of, if not the, longest entries in the RRG, and it comes chock full of loopholes, exceptions, and idiosyncrasies. Speaking about all of them would require an entire podcast episode (hint hint Jay), so I will attempt to discuss the major points for the rest of this article.

From an attacker’s perspective, removing and preventing cover for an opponent is incredibly important. There are a few common ways to achieve this, ranginging from keywords such as Sharpshooter and Critical to utilizing some exceptions given in the RRG. Sharpshooter reduces a defender’s cover while being attacked, while Critical allows you to convert a surge into a critical hit, which automatically passes through cover without being blocked.

The RRG states that if a unit’s leader is in base contact with the piece of terrain that is obscuring the defending mini, the defender does not gain cover from that piece of terrain. This exception is rather straightforward, and explained by this example. 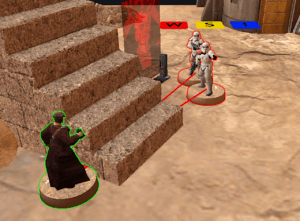 There is a loophole to this exception however. If the defending minis are completely invisible or obscured to the attacker’s unit leader, the unit still retains their cover, and it is assigned heavy cover.

Let’s next talk about cover “stacking,” or the general lack there-of. When I say cover stacking, I mean multiple sources of cover, such as two or three pieces of terrain, combining together to raise the cover level of a unit. I’ve collected a few examples for this to discuss:

In the first example, the defending unit retains light cover only, as two pieces of light cover do NOT stack to create heavy cover (RRG pg. 29). The second example results in heavy cover, as the highest level of cover takes priority. In the third, the unit has heavy cover, because suppression DOES stack to raise the light cover to heavy. Suppression tokens and the Cover keyword are the only ways to stack cover in Legion.

The High Ground, or elevation, also has some oddities worth discussing. Let’s use this example to begin with. 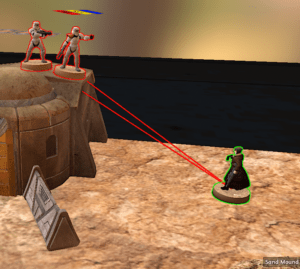 Once again, our fearless rebel trooper leader is taking on a squad of stormtroopers. This time, he is firing up at an elevated squad. This situation is actually rather simple. The stormtroopers, because of their elevation, will have at least a small piece of their base blocked from view at nearly any angle, thereby granting the cover provided by the building.

A general tip to keep in mind is that a unit shooting up towards higher elevation will nearly always be providing cover the to the defender, unless you are touching the building with the unit leader.

So, we have the straightforward situations out of the way, and now we move to the two most complex cover situations I tend to come across while playing and judging: when a squad has multiple levels of cover and when archways come into play.

In this scenario, the good General Greivous is here to ruin these clones’ day. More importantly, we have a clear scenario in which two clones are in heavy cover from the barricade, two are in light cover from the cargo pallet, and one is in the open. What kind of cover do the clones have from Grievous? 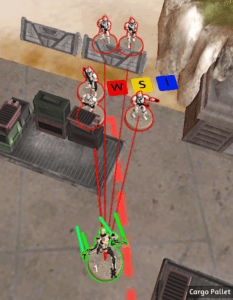 For example, had three of the clones been in light cover and one clone in heavy cover, the unit would only receive the benefits of light cover.

So, ready for the final mindtwister?

Dooku has Captain Rex in line for a Force Lightning attack. If you look closely, the far right side of Rex’s base is obscured by the archway, causing the second step of drawing the 2D line to initiate. Is there any cover here? 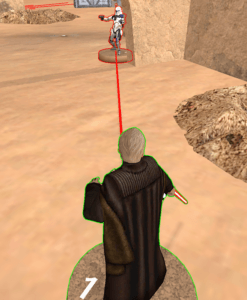 There is, and it’s heavy cover. Now let me explain why.

The line drawn between minis comes across the 2D plane here. Because the line, when viewed top down, goes through the archway providing the small bit of obstruction, heavy cover is granted. Crazy right? 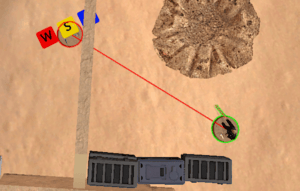 As I mentioned above, there are a million loopholes, exceptions, and situations we could dive into about this mechanic. I have attempted to explain the most common concepts, as well as some deeper cuts, in this article, but I know I have left some out. Please feel free to reach out to myself or anyone else at Fifth Trooper and we will be more than happy to help resolve any kind of cover situation for the future. Until next month!