Has there ever been a moment in your life where you felt like the planets were aligned and everything that happened from that moment on seemed pre-destined?  I’d like to make a case for this to be the T-47’s time in Star Wars: Legion. I will present my case with facts and eyewitness testimony. By the end of this trial you will see that my client is innocent…. err viable!

I know what you’re thinking “Jay you’re trying to force this to work”, that is true but also, I think this will make sense and maybe change your opinion on the T-47. Let’s break down where the game/meta is right now:

Now if we take these points at face value the Airspeeder is the perfect answer. It can get to ranged units quickly if needed, it has impact 3, it has Speeder 2 and it is a nostalgic piece of Star Wars lore. Combo the T-47 with an excellent commander (Leia/Luke), the power of Z-6 squads and some range of your own and you have a very inspiring list. Lets take a look at the specs of the T-47 along with current command cards that will benefit you having this unit in your army:

Armor/Cover: First off, the T-47 has full armor and 7 health, this alone is a big obstacle for some lists. Now add Cover 1 and you’re getting closer to a very difficult to hit unit. Now make it even harder to hit by adding the Outer Rim Speeder Jockey for an additional cover 1.

Immune Blast, Melee: One of the Empire’s tricks is to add a mini’s die  like the Snowtrooper flamer or the Death Troopers grenade launcher config to their attack pool. This allows them to throw a ton of dice while ignoring cover. With the T-47s immunity to blast it’s just one less thing you need to worry about. In addition, the Airspeeder is immune to melee too, meaning it can’t be held up from going where it wants or shooting what it wants.

Turning the Tide: This card is pretty good when looking down the barrel of Annihilation Looms. It is meant for 2 Support or Heavy units so may be better in a double Airspeeder list but can still potentially be good with a Luke/battle meditation combo. 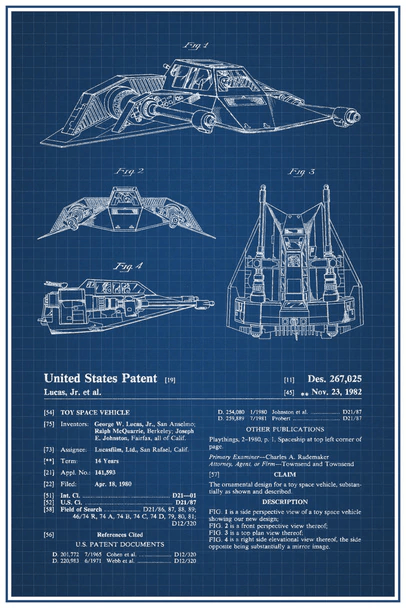 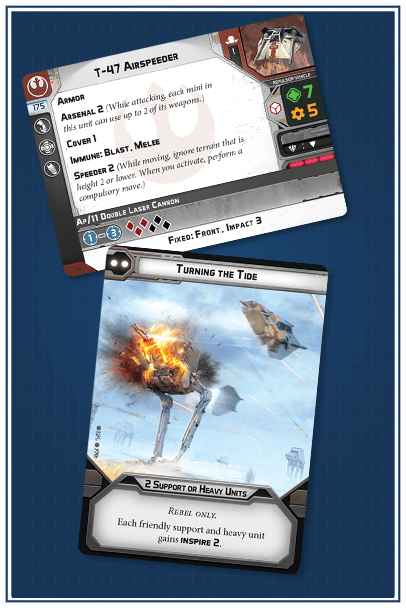 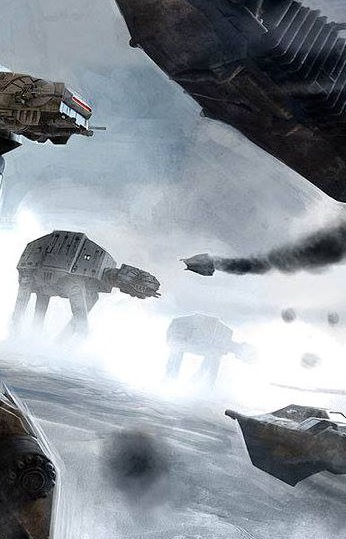 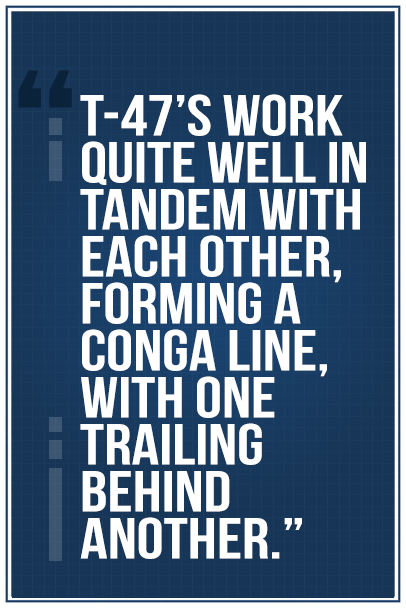 Now that I have made my opening statement, I would like to call my first witness: Thomas (TheTwish) from Discord.

Thomas is arguably one of the best Airspeeder players that we had the pleasure of watching during the TTS tournaments. I reached out to him to see what his thoughts were on running the T-47.

What made you decide to run the T-47?

“Back when snipers had first been released, I saw the T-47 as a way to push the advantage in the “sniper war”, being able to deploy separate from your army, flanking the enemy snipers (easily able to get them out of cover due to its height and positioning) to pick off some vital activations early, then going on to disrupt the main part of the enemy forces having served its purpose.”

How many Airspeeders did/do you like to run? Why?

“Two felt required, if not for the pure intimidation factor alone. T-47’s work quite well in tandem with each other, forming a conga line, with one trailing behind another. This allows you to quickly chain together two attacks.

If your army should start struggling on the other side of the map, you can easily break formation and send the T-47 sitting behind over to help, while the frontmost one continues to disrupt.

What is the main thing people should know about running the T-47?

“As with pretty much all the vehicles that have the “speeder-X” keyword, it is easy to fall into the trap of using that to its full potential, quite often ending up too close to the main bulk of enemy forces with little to no back up early in the first round.

If you can’t give them an order on turn 1 (due to playing bombardment or standing orders) and you pull them early, it sucks but you just gotta accept you probably aren’t attacking the enemy with it that round. There is no point getting a single attack off and losing the t-47 round 1 when you could hold it back turn 1 and get multiple attacks off during the rest of the game.”

What do you see as their role in a rebel list?

“They are disruption gods. Their dice pool averages out at 3.75 hits without an aim, that is only 0.25 more than a z6 squad, and with a lot less dice.

No panic to worry about means you can plop them down ready to take the scenic route of the board, engaging the enemy from a flank they had unprotected, in a position that leaves them vulnerable. That being said, in their current state even that takes a lot of finesse, and while the payout can be wonderful (picking off snipers that have no cover) it takes a lot of work to make that possible.”

What are the best objective, battlefield and condition cards for the T-47?

“Recover the Supplies probably sucks the most for the T-47, not only because the T-47 can’t claim objectives but because the rest of the army needs to stick together to compensate for having a flanking unit, and recover forces you to spread your army thin to do objectives. Intercept can be a rough one as well, as the objectives are evenly spaced out, meaning so is your enemies army. This causes your T-47 to run into resistance when trying to flank as it will almost always be flying over some part of your enemy’s army.

The T-47 suffers most from having limited options, being restricted and funneled down single routes, half its strengths come from being able to reassess its situation at any moment and re-position accordingly. The Long March makes it so that you have much less space to work with when it comes to setting up flanks, and often means you must go OVER the enemy to get to their snipers, rather than around. Disarray works perfectly for the T-47 as you can start on the opposite side of the map, and battle lines, advances positions and major offensive all give you lots of room to work with when it comes to positioning.

Limited vis is a must, not just because of the range 4 power of imperials nowadays, but because avoiding a veers bombard or a crit lizard lying in wait can be crucial in the early turns. I think that hostile environment does the T-47 the most harm, somewhat surprisingly. Having cover 1 from suppression can drastically reduce how impactful the t-47 can be. The whole point of flanking is to get your opponent out of cover, going through all that only to find they have cover because your sniper shot at them the turn before SUCKS.”

What does a successful game with a T-47 look like?

“Get that flank going strong, timing is crucial, too early and you will get a shot off and quickly get shot down, too late and you’ve wasted a lot of points doing nothing. Snipers are the main goal, however that doesn’t have to be your only target, last turn/first turn shooting a tank while flying from one side of it to another can be a big swing in power, knocking out 4 wounds in 2 attacks (you’ll have impact 4 from being in its side arc, yum!).

Some games may result in the T-47 simply being a scary presence. If your opponent is clearly focused on dealing with the T-47, take the rest of your army and move up, double move with a few units even if it puts them in a good position. Put the pressure on your opponent to make that decision on what they value shooting at more. Let’s face it, rebels have to be proactive in their decision making, If I’m stressing my opponent out then I’m doing something right.”

“Leia just works, you keep your troops alive with dodges and ensure they are mostly getting 2 actions per activation. Improv orders is a must, you don’t want to be drawing Leia or your T-47 at a bad time. Esteemed Leader is a good pickup as well because you only have the 1 commander and you want to keep them alive (although if Leia is close enough to be getting shot at early, you are probably doing something wrong), as for the rest of the list, it is basically just wonder twins -Luke, 6z6 and 3 snipers. Speedy jockey isn’t a must have in my eyes (unlike a certain imperial pilot giving the vehicle surge to hit…*sigh*), but it is a nice upgrade all the same.”

Looking at this list (list to the right) I sat here thinking “you know what, this honestly isn’t that bad”. Normally taking such a big unit means your core army is lacking (like the early days with AT-ST lists having hardly any corps to back it up and take objectives), but in this list you have the full Z6s. Then I realize it is because I’m looking at wonder twins where Luke has managed to morph himself into a giant flying speeder.”

“You’re going to be at 9/10 activations (there is no argument there) and with 3 snipers, your frontline looks pretty weak with you only being able to fit about 3z6 squads. You are also taking 2 T-47’s, so upgrades on them are not something you can really spare/need. Something like this would probably be standard.”

Ladies and Gentlemen of the Jury, I believe that we are at a point in the game where running a T-47 can be viable and maybe even get you some wins. I think that at the very least we should be giving it another chance. I have made a few additional lists for your consumption and consideration. Good luck and happy hunting.