The Star Wars: Legion Rules Reference uses several different phrases to describe the different kinds of movement that are possible in the game. In this article, I hope to clear up some of the confusion surrounding the language the RRG uses regarding moves and how they interact with various abilities.

Let’s start from the very beginning, at the Movement entry in the Rules Reference Guide (p. 53). In Star Wars: Legion, units get around the battlefield by moving. The most common way they do this is by taking move actions, but let’s hold off on that point for a moment. There are several types of moves as defined by the RRG:

Not All Moves Are Actions

The first point of confusion about moving in Legion is that not all moves are actions. There are multiple sources of movement in the game that don’t come from actions done by units, but are instead produced by Keywords, command cards, and upgrade cards. These moves are not considered actions, they are just plain moves. The first and best example of this is the Scout keyword, where the move produced by this keyword is explicitly defined as not being an action:

Scout: A move performed with the Scout X keyword is a move, but is not a move action. (RRG 66)

On command cards and upgrade cards, the player will be instructed to “perform a speed-x move.” These moves are not considered actions. Command cards will generally indicate if the moves they enable are actions or not. And speaking of command cards, Leia Organa’s 2-pip is a good case study of all the ideas presented in this article, but we have more ground to cover before we get there.

Relentless (and its children, Steady, and Charge): Free attacks hinged on units performing move actions. These abilities do not trigger off moves.

There are also a number of abilities that trigger off just movement, whether that comes from acting or not, which broadens their overall application:

Detonate X: Detonate specifically calls out moves or actions as triggers. (RRG 36)
Standby: After an enemy unit attacks, moves, or performs an action, if that unit is at range 1–2 and in line of sight of a unit with a standby token, that unit may spend that standby token to perform a free attack action or a free move action. (RRG 70)

Not All Moves are Standard Moves

There’s a further distinction to be made with movement that we saw at the start of this article, which is whether or not a move is a Standard Move. Climbing/Clambering, Embarking/Disembarking, Reversing, Pivoting and Strafing are not considered standard moves. Just like the distinction between a move and a move action is used to enable or disable abilities, the category of Standard Move is used in the same way, and also receives its own definition. (RRG 70)

Here are some examples of abilities limited to Standard Moves:

Here is another interesting distinction between standard moves and pivots, found in the vehicle rules:

Disabled: If a vehicle is disabled, it must spend two actions to perform a standard move, and it cannot reverse, but it may still pivot as normal, spending only one action. This complies with the notion that pivots are not standard moves.

Not All Standard Moves are Actions

This is the part that confuses people the most, I find. Moves produced by cards like No Time for Sorrows and Force Push are called ‘speed-x’ moves, and the RRG says that speed-x moves are standard moves, which means they trigger abilities like Agile and Tactical. At the same time, these moves are not considered move actions, meaning they don’t trigger abilities like Relentless and its children, Steady and Charge.

I’ve mentioned Leia’s 2 pip twice now, so let’s see it in action with a common scenario:

Leia plays No Time for Sorrows and issues orders to Operative Luke Skywalker and a unit of Tauntaun Riders.

Luke Skywalker is issued an order, so he performs a speed-1 move. He uses his Offensive Push upgrade card to gain Tactical 1. Since all speed-x moves are Standard Moves (RRG 70), Luke would gain an Aim token from Tactical 1 during this move, but since this is a move and not a move action, Luke could not use this move to Charge.

In similar fashion, the Tauntauns receive an order and perform a speed-1 move. Since all speed-1 moves are Standard Moves, the Tauntauns can choose to Reposition and gain a dodge from Agile, but they cannot attack with Relentless, since this move is not an action, nor is the pivot from Reposition. 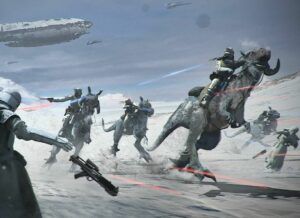 Tying It All Together

Essentially, when attempting to apply abilities that trigger after movement, you will want to see if a particular move meets all the requirements. So far, there are three boxes: move, standard move, move action. All can be true, or none can be true.

Here’s a little self-test: is what’s described a move, a standard move, a move action, or some combination of all three? Each situation can check multiple boxes, or it can check none.

A unit of Snowtroopers moves during their activation. Can they use Steady?

Yes. This is a move action.

Can Emperor Palpatine use Pulling the Strings to cause a friendly unit to climb or clamber?

Yes. This is a move action, and does not require a Standard Move.

Sabine uses her Explosions command card and performs Arm 2: Thermal Charge. Can she take her speed-1 move and then Detonate?

Yes. This is a move, but not a move action. It is also a Standard Move.

A unit of Wookiees are Force Pushed into melee. Can they Charge in response?

No. This is a move, but not a move action.

Darth Vader uses Vader’s Might to throw a unit of Tauntauns on top of a building. Can they use Relentless once they land? Here’s Vader’s Might for reference: 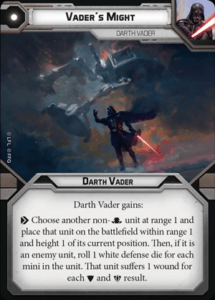 No. Vader’s might may ‘move’ a unit to a different place, but it is not any kind of move as defined by the RRG.

I hope this helps clear up any confusion. If you have more questions, please post them in the comments and I will reply to your queries.

2 thoughts on “Clearing Up Your Movement Confusion”