Unless you live under a Lothal rock you may have heard that the man who hates sand is coming to Star Wars Legion. Our very own Mike Barry put out his article on Monday about Anakin Skywalker, The Notorious Scoundrels podcast hit it on last Tuesday….he’s coarse, he’s fine, he’s everywhere! In the wise words of Chancellor Palpatine: “Ironic….”.

Now while this is all very exciting news, and Anakin seems like an absolute blast to put on the Legion tables, there’s more to the expansion than the Chosen One. In the expansion there comes several upgrade cards but one in particular seems worthy of its own discussion, both good and bad. Let’s have a look at Force Barrier, shall we? 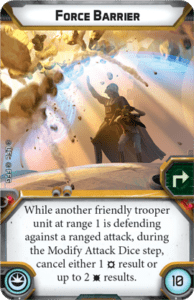 Force Barrier is, of course, a Force power that can be put on any unit that can wield Force powers (sorry Grievous). Now Force powers are already a very, very competitive slot in Star Wars Legion but something tells me a good amount of lightsaber wielders are going to want to find a way to get this in their list. Especially defensive Force users like Obi Wan Kenobi, Count Dooku, and Emperor Palpatine. Being able to mitigate “damage”  from incoming shots into your army cannot be understated. We discussed this on the podcast, and I put damage in quotes above, because it’s not effectively stopping damage per se, even though that is the easiest way to put it. What you’re doing is essentially taking rolling dice out of the equation in some situations, which is absolutely game changing because this game is still a game that relies on RNG (random number generator). For this reason it is exactly why I think this card is great, but also somewhat bad. Both are in two completely different sentiments.

The card is great because I play Obi Wan Kenobi and Operative Luke basically exclusively, more so Obi Wan than Luke these days. Both of these Jedi have a certain keyword named Master of the Force 1, which allows them to refresh a Force power of their choosing at the end of their activation. For Obi Wan this is absolutely excellent, and I will get into in the near future builds of Obi Wan specifically, because it synergizes with how Obi Wan plays in the game of Legion. He’s the epitome of a “great defense is a great offense” strategy and coupled with several Force powers and other upgrades you can find ways to keep your Clone Army around you standing.

This is where the bad comes in. My sole issue when it comes to Force Barrier, and I noted this on the Podcast and now in this blog, is that it takes away rolling dice. I don’t know about you but rolling dice in Legion is like one of the best parts. Heck, it’s the best part of most games you may play. Something about picking up them dice and tossing them is just so thrilling. It’s a card that is going to bring some frustration, as an opponent, because it’s going to alter the scope of the game quite a bit depending on what’s shooting, who is defending, etc.

Commander Luke: I love Commander Luke, even after all these years he’s still so reliable. That said, I don’t think that Force Barrier is a card you will want to take with Commander Luke. The lack of Master of the Force, the need for Force Push, and the wanting of Jedi Mind Trick are combined to just make this a hard sell.

Operative Luke: Operative Luke is unequivocally one of the best Force users in the game, and I think he should be way more prominently played than he is right now. With an extra force slot AND Master of the Force 1,compared to Commander Luke, I can see a case for Force Barrier to be slotted here. It will depend on the complete make up of your list to justify spending the ten points, and a force power you’re going to recover with your MOTF. I think if you’re running Operative Luke alongside some Mandalorians here’s a build I would consider:

The idea with this list is that you let the Mandalorians run alongside Luke and you now have extra protection for them. Luke has plenty of cards that give him tokens, Cassian has cards that can give him tokens. There’s plenty of synergy here, and then even when you do take wounds you have three medics backing you up.

Imperials
Commander Vader: Ironically it is the inverse when it comes to Vader. The Commander version of Vader has a much easier time getting Force Barrier to work in a list due to having a third Force slot. He, of course, has Master of the Force and I’m starting to sense a theme! Th

e best thing about Vader in this instance is that he’s pretty slow so the army around him can typically stay around him until he needs to do his thing. This will leave you plenty of opportunity to use Force Barrier. Even though I haven’t played Imperials in a hot minute, and I’m not that big of a fan of Barrier on Vader, let’s see what I think might be a good, competitive list with Commander Vader using Force Barrier:

Operative Vader: With only two Force Slots I just don’t see Barrier making the cut when it comes to Operative Vader. He’s most likely going to want to take Force Push and Force Choke nine out of ten times.

Emperor Palpatine: Now Palpatine is who Barrier benefits most, I think. Palpatine has fallen out of the meta a bit as of recently, for a multitude of reasons, but Force Barrier might be a way to get him back in. He’s typically in the center of your army, slowly moving up with them until it’s time for some Palpatine Jazz Hands. Take into account that he has Master of the Force 2, as opposed to one for most force users, it actually seems like a no brainer for Palpatine going forward. Let’s have a look:

Count Dooku: Lord Tyranus falls into a similar category as his former master. He has three force slots, is a defensive piece that moves slowly across the battlefield, and has Master of the Force 2. While saving B1 droids on the face of it does not seem all that great, I think it might be overlooked. Droids have so many wounds to chew through as it is, let alone when Dooku has the ability to multiply those wounds by stopping “armor” saves from happening. Not to mention Dooku likes to be paired with other characters, especially with Darth Maul coming soon, and while that may not happen often that is some serious value. Did someone say Dooku and Maul?!

Darth Maul: Maul is an aggressive sith lord that can infiltrate and has jump. His usage in the army is not going to be revolving around using Barrier to save the droids around him.

GAR
Obi Wan Kenobi: Is there a better match for Force Barrier than Obi Wan Kenobi? The man already(!) has Guardian 3 and now you can let him do that but not roll any dice…in a faction where wounds probably cost/matter the most? Yes please, especially with Master of the Force. I think whenever you see an Obi Wan Kenobi across the table with Force Barrier you’re going to be in for a hell of a game for putting damage through. Let’s take a look at the Obi Wan build I would run as of right now:

Anakin Skywalker: I think there is potential for Anakin to play similar to how Commander Luke used to play, which means there’s also a possibility for Anakin to run Barrier in his second force slot. The issue being, of course, is that in order for Anakin to gain Master of the Force 1 he needs to play a command card with a certain drawback: he has to make an attack or he will gain a suppression at the end of his activation. All of this, of course, is important because of his Flaw card. Here is a potential list that might work with Anakin playing defensive and more of a linebacker:

Ultimately Force Barrier is going to come down to playstyle. If you think the Force use you are putting on the table has one job and one job only (swinging their laser sword) then I totally understand why you may not want to bring Force Barrier. I think two of the most common themes in all of the discussion above, as well, is whether your Force user has a Force slot available for Barrier (Force powers might be the most sought after slot in the game) and whether your Force user has Master of the Force X as a keyword. Barriers value will do nothing but go up if you have that free refresh available to you. Regardless of who you put it on , and how you utilize it, Barrier is going to be a game changing card for Force users in my opinion. As you may have read in my last piece, about Obi Wan Kenobi, I strongly believe Force users flourish in this game because of the army and heavy weapons behind them opening up the battle field. Force Barrier basically can help enable your army around you to make the delivery system for your Force user even more defended than it was before. I can’t wait to see how the meta might potentially shift when Anakin and Maul enter Star Wars Legion along with Force Barrier. May the Force be with You!