We got some hot new neutral upgrades off the press for you – Ascension Cables and Situational Awareness.  Both of these upgrades look very solid and appear to have a myriad of uses.  Let’s take a gander at each. 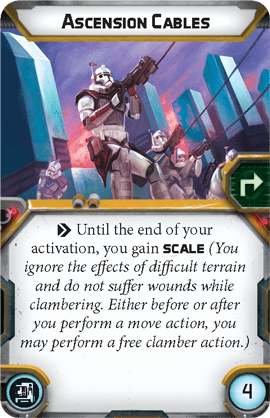 Four points, exhaustible Scale.  Scale is a great keyword, providing both the effects of unhindered and expert climber while giving you a free clamber on the back or front of a move.  Due to the extra flex and distance you get from the additional action, Scale is a lot better than just Expert Climber.  Unlike Jump, Scale is not a card action, which also means you can do it twice in one turn.  There are situations where having Scale actually gets you further than just using Jump would.

This card is great with access to free recover actions, but it is still good even if you potentially only use it once.  Command cards that provide free recover actions include: Imperial Discipline (Veers), Volunteer Mission (Cassian), Symbol of Rebellion (Sabine), and Consussive Blast (Iden).

I actually think this upgrade can be good on units that already have Jump, as it allows you another height change and an unhindered move on your second move.  How often do you wish you could jump twice?  This is almost as good.

Possible targets for this upgrade: 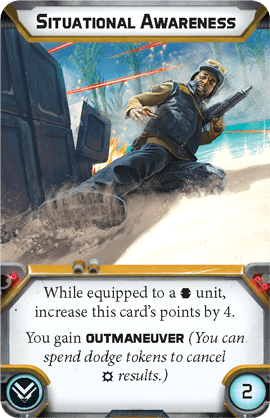 Wouldn’t it be great if there was an upgrade that let you dodge crits?  Well… here you go.

Two points a steal for this effect.  Unfortunately it is a training upgrade, which means Rebel Troopers can’t take it, but there are a lot of other units this could be great on.  Basically you are looking at units that: 1) often get dodge tokens via abilities or command cards, and/or 2) have Nimble or Deflect.  I don’t know about you, but I am instantly stapling this to Jedi Luke, Sabine, Iden, and Obi-Wan.

Note that this upgrade costs more for support units.  I can’t think of very many support units with training slots, but it seems pretty great on a certian snow lizard…

Possible targets for this upgrade:

Well there you have it.  Hopefully you enjoyed a couple of spicy previews!