The average day for the Imperials occupying the Holy City of Jedha is pretty standard; check in with superiors every hour, walk or sit in the awful heat, and get pestered by religious zealots who say the Empire have ruined their holy place. Day in and day out, most of the troopers stationed here would likely jump at the sign of any kind of disturbance just to have something to do. Other troopers would pass the time by shaking down locals, chat on the local comm channels, or count transport ships taking loads of kyber from the city.

“Fifteen.” On the rooftop of a taller building, two scout troopers were assigned to watch over the city streets from above. One sniper leaned against a wall while his compatriot spotter counted another shuttle flying away from the city. “How many do you think they send out every day?” 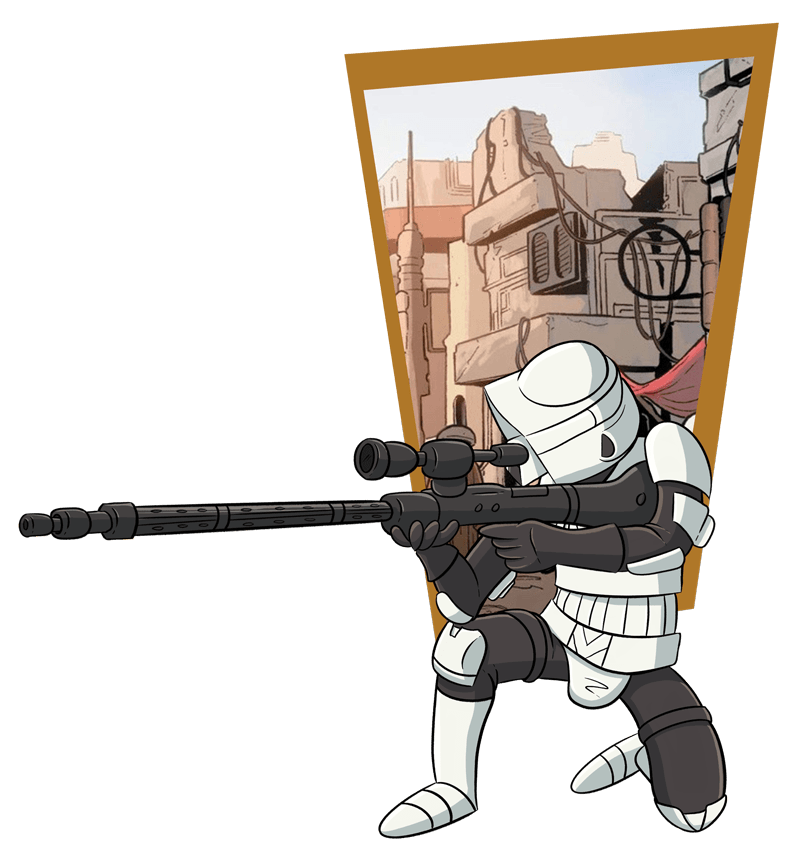 “Well I always knew there were shuttles coming and going, but I never stopped to count them,” the spotter said. “Now that I have, it’s kind of shocking.” The sniper shrugged and grabbed his rifle.

“You should be watching the streets,” the sniper told him. “Not counting ships.”

“Yeah, yeah.” The spotter looked back down at the streets, grabbing his electrobinoculars to zoom in where needed. “Go ahead and give them an all clear for now.” The sniper pulled up his communicator from his belt.

“Rooftop two is all clear. Repeat, rooftop two is clear.” He holstered it again and began looking around, sighing from boredom. “This job sucks.”

“What?” The spotter asked. “What do you mean? You don’t mean that!”

“Yeah, it does though,” the sniper replied. “Commander Kelara treats us like dirt. She just sits back with her electrobinoculars and complains about our shooting.”

“Well, that’s the Empire for you.” The spotter shrugged his shoulders. “Sometimes we get stuck with commanders like that.”

“Well they made me a sniper for a reason,” he said. “I’m a great shot.” The spotter looked around at the other rooftops.

“Okay,” the spotter said. “So snipe one of those plants there.” He pointed to some potted plants perched on the balcony of a building.

“What are you, nuts?” The sniper turned to face him. “Live fire on patrol? This isn’t the training ground, we’ll get immediate punishment.”

“Just say it was a weapon malfunction!”

“Well then I’d get yelled at for not maintaining my weapon!”

“Fine, fine.” The spotter conceded his pleas. He pulled up his binocs once again and scanned the horizon. “Oh hey, I see rooftop one. Oh! They see me!” He put up his hand and started waving at a similar sniper team of two set up on a rooftop several streets away from them.

“Quit gawking,” the sniper told him. “Check the streets.”

“I am! Calm down,” the spotter said, turning his gaze back down to the busy streets. “Not like anything crazy is happening.”

“I’d rather not miss it if there were.” The sniper said. “Kind of our job.” The two of them sat for a moment in silence before the sniper broke it again. “Even if it does suck.”

A clatter of footsteps began growing louder from the street right below the two scouts. The spotter turned, looking down to see a squad of stormtroopers proudly marching through on the pathway below them.

“How can you tell?” The sniper asked, without looking.

“She always goes this way on patrol,” the spotter replied. “One of her squad mates carries a RT-97C blaster rifle as well. That’s how I can spot her squad.”

The sniper stepped up next to the spotter and looked down at the squad of stormtroopers marching by. The squad leader looked up to see the scouts already staring back down at them. The spotter gave them a friendly wave, which caused the squad leader to hesitate before giving back a very unsure and awkward wave in return. After a moment, the troopers continued on past the scouts and prepared to round the next corner.

“You know there are three other squads of troopers on patrol that take this way?” The sniper asked. “And that each of those squads has somebody with an RT-97C?”

“Wait, really?” The spotter asked, staring at the troopers rounding the corner. He paused for a moment before replying. “I bet that was still her. She’s great.”

“Uh-huh.” The sniper gave an empty agreement before taking a knee once again with his rifle.

“She is!” The spotter replied. “She was the youngest AND the best in her graduating class at the academy! She’s really nice too.”

“Have you talked to her?” The sniper asked with just as empty of a tone.

“Well, not really,” the spotter slumped his shoulders. “But I’d like to. I want to see if she’d consider going on a date.” The sniper slowly turned to face him.

“First of all, when the hell do you have the time for a date?” He asked, suddenly showing more interest in the topic with his tone. “Second, what’s to stop her from dating anyone else in her squad that she knows 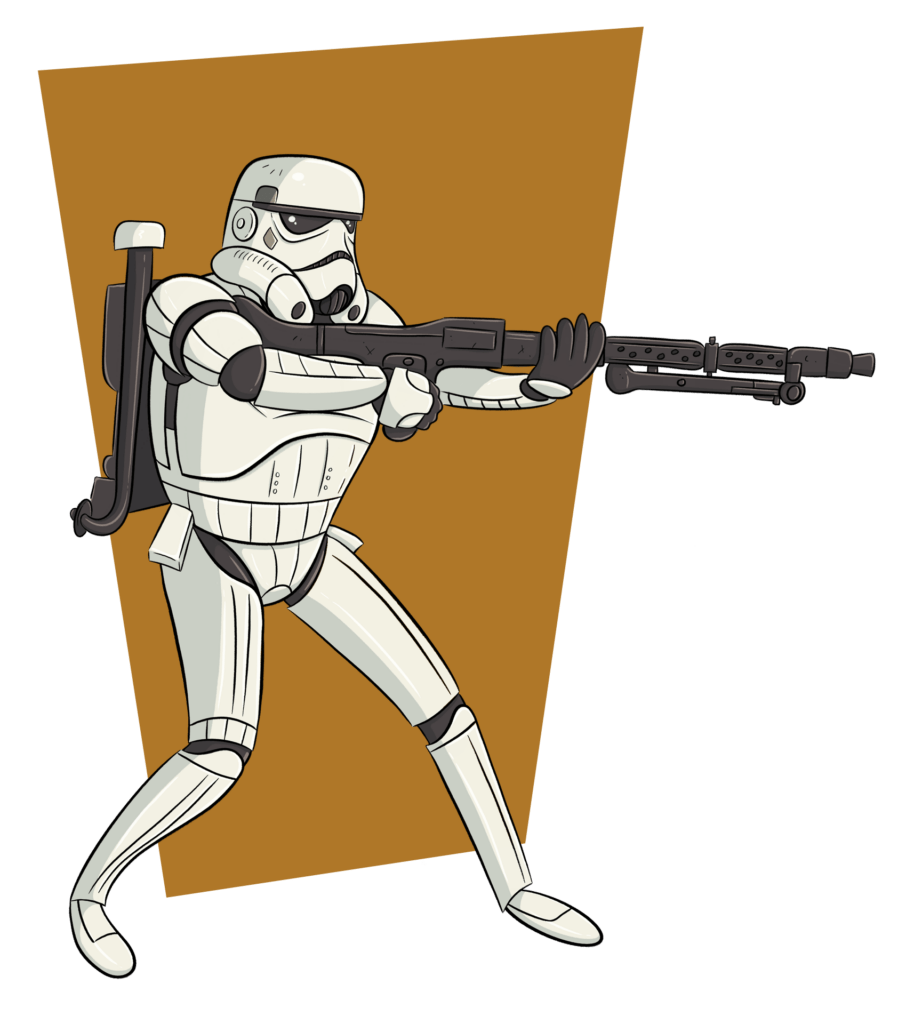 “What? Arbmab?” The spotter asked, shocked at his friend’s words. “What does Arbmab have that I don’t?”

“Well he’s closer in rank than you are, for starters.” The sniper said. “They’re both ground forces, sometimes she even escorts his AT-ST walker. Oh yeah, and he commands a walker!”

“Wait, I thought he was a tank driver? Did he get promoted again?”

“I think so.” The sniper said. “They got some other elite armor pilot for his TX-225 tank. They just upgraded it with it’s own mounted RT-97C Pintle, and now he’s moved on.”

“Is he in that walker I’ve seen with the mortar launcher? That thing looks nice.”

“Man…” The spotter slumped his shoulders once again and looked down at the street. After a long pause, he looked back at his partner. “I bet he’s too busy being so perfect to have time for her. I still have a shot.”

“No I’m not!” The spotter replied. He picked up his binocs again and took to scanning the streets. “There’s nothing wrong with-” He broke off and zoomed his electrobinoculars. “Hey, wait a minute.”

“Yeah, I think some kind of protest going on.” He handed his binoculars to his partner. “Here, look. Right there. See?” He pointed to a group several streets away. The sniper grabbed the binocs and looked through them.

“I think they’re just chanting,” he said. “Doesn’t look like a protest.”

“I don’t know, it looks dangerous to me,” the spotter said. “I’d say to be ready in case it turns into a riot.” The sniper turned his head to his partner.

“You just want me to shoot something, don’t you?”

“Hey, I just said be ready,” the spotter said. “Not that it matters if you aren’t as good of a shot as you keep saying.”

“Woah, did you just say that?” The sniper asked in disbelief. “Are you insulting me right now?”

“No, not at all,” the spotter offered. “I’m just stating facts.” The sniper sighed and dropped his head in frustration. “I haven’t seen this accuracy you’ve been on about, and you-”

“You know what? You know what?” The sniper picked up his rifle, quickly aiming it at the potted plant from before. After only a moment of adjusting his aim, he fired a shot that shattered the pot into pieces. Fragments of the pot scattered and fell into the street below with the plant falling after them. “There! I got it! Happy?”

Several people from around the street below began scattering, some screaming at the sound of the loud blaster that had been shot off. The scouts on rooftop one similarly pulled up their rifle and began scanning the streets. Several squads all began calling in asking what the shot was and requesting a situation update.

“Uh oh,” The sniper said, realizing what had just happened. His comm rang with the sound of his commander’s voice.

“Rooftop two, what’s the situation?” Commander Kelara asked, already sounding angry. The two scouts looked to each other before the sniper answered.

“J-just a weapon malfunction, ma’am,” he said, trying to cover it all up. “Everybody is fine…uh, are you alright?”

“It seems you two need to be instructed how to properly maintain a blaster!” Kelara barked back through the comm. “Report to my station at once!” With that, the comm clicked off. The sniper sighed and dropped his head before turning back to his spotter.

“You see what you made me do? This is your fault!” The sniper accused.

“Me!?” The spotter argued back. “YOU pulled the trigger!”

“Well you wouldn’t shut up until I did!”

“Okay, okay, let’s calm down,” The spotter said, clipping his binocs to his belt. “Let’s just hurry up and go before this gets worse.” The two groaned as they headed to the stairs connecting their rooftop to the street.

“How much longer do you think we’ll have to put up with these unreasonable commanders?” The sniper asked. His partner turned to him. The spotter turned to him and gave him a pat on the shoulder.

“I’m sure it won’t be that much longer. We’ll be moving up the chain in no time, don’t you worry.”

Ben Jeatran has always had a passion for Star Wars since birth (he was born on May the Fourth). Combining his passions of Star Wars and writing, Ben has spent a lot of time making narrative stories in the Star Wars galaxy, and has done the same in the scale of Legion. When he isn't writing, he likes to try his hand at painting his figures the best he can, spending way more time hobbling than playing. Ben can be found on the Legion Facebook page or on the Legion Discord under the name "MrBobshadow".