The USPS has suspended all Priority and First Class mail to Australia. We will not be able to offer products to Australia until this is reinstated. Dismiss

Welcome to the first part in a new series we’re entitling “List Identification.” In this series, we will be taking a look at some common competitive Star Wars Legion list archetypes, and analyzing the main strengths, weaknesses, counter-plays, and one unique strategy or wildcard that each list brings to the table. We begin this time with a relatively new concept that is sure to surprise a number of players, and it comes in the form of this nine activation Republic setup. As we dive into the concepts and stratagems involved, a common theme of recognition and adaptation will be the focus.

As with any current clone list, the strength of the army lies within the clone corp troopers. One of the unique aspects of this list construction is the variety within the Phase I heavy weapons and the Phase II trooper inclusion. In this case, the opponent has a strong range three presence with three Z6s, a little bit of range four presence with a single DC-15, and two wild cards with plain Phase IIs and a DP-23 shotgun. Right off the bat from first glance, understanding that the clones are going to win a range three firefight is crucial, as the token sharing and quality of dice the clones possess easily outdo the vast majority of opponent gunlines (with the notable exception of an optimized Shoretrooper-Deathtrooper list). Additionally, the presence of Obi-Wan creates a strong melee deterrent to anything attempting to breach the clone lines, and Captain Rex and the Phase IIs helps to keep the clones firing with their Tactical and Reliable keywords, providing them with free aims and surges respectively.

This is a fairly well rounded list, but I’d like to pay particular attention to the DP-23, especially when paired with Captain Rex. More specifically, Captain Rex’s 2-Pip Command Card, “Eat this, Clankers!,” which translated from Spanish reads:

When a friendly trooper unit performs a ranged attack while having a faceup order token and an Aim token, during the “gather attack dice pool” step, that unit can increase the maximum range of every weapon by 1 (to a maximum of 4) 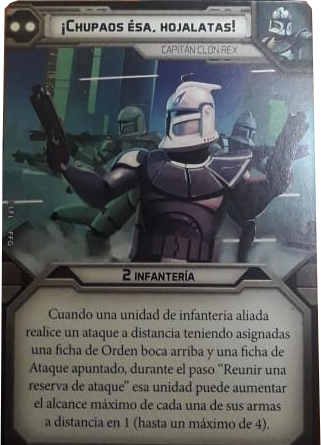 On turn zero during deployment, Rex’s Scouting Party keyword allows him to scout other troopers units at range 1-2 forward with him, which means that the DP-23 can immediately be moved into range three of enemy units. The counter-play to this is quite simple, yet comes with some positioning consequences: deploy outside of range three of the DP-23’s location. This also requires some premeasuring knowledge and understanding of how far a unit would be able to scout towards you to ensure that you toe the line between staying out of range three but not deploying so far back you give your opponent free territory.

Let’s use this TableTop Simulator practical example to demonstrate. As you can see, the DP-23 squad has scouted up from a battle lines deployment, and Rex’s 2-Pip has been played. Therefore, their range of fire for this turn is the red circle that you see emanating from them, which is range three. As the player attempting to avoid this shot, you can see the problem, as a single move from the DP-23 squad puts their firing range into the deployment zone on the other side. As mentioned above, staying out of range can be difficult, and the use of line of sight blockers is paramount. However, don’t forget that this is only for a single attack, so do not hide in a corner or cede too much range to avoid a single shot.

The other major aspect to analyzing and understanding your opponents clone corp is anticipating positioning. Most clone lists tend to keep their corp in a “blob” where the units are interlocked with each other to maximize token sharing with the Phase II units either at the heart or the rear of the blob. As a result of the physical size of the blob, it can be easier to anticipate their movements and their locations on the table, and move accordingly. Additionally, there are three main units in this specific list that have very important locations, and understanding how and where they like to be placed gives you an advantage when countering your opponent.

Let’s begin with Obi-Wan. Due to the defensive nature of his keywords and command cards, he is frequently at the heart of the enemy forces, and more importantly, next to the highest value targets. Obi-Wan presents the most dangerous protection for the opponent, and learning when to anticipate, and draw out, his 2-Pip “Knowledge and Defense” is crucial to unlocking the clone puzzle. 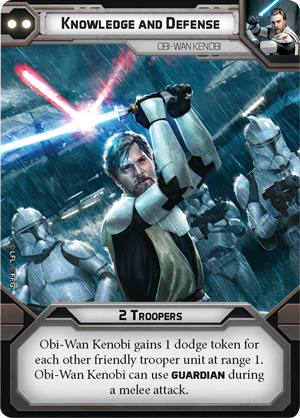 Due to the aforementioned clone blob, Obi-Wan tends to be surrounded by a large number of friendly troopers, and frequently gains five or more dodge tokens. Thanks to his Soresu Mastery, he is able to spend these dodges when using guardian, which creates a huge defensive circle that proves difficult to breach. The best way to counter this card is to not attack when it is played, and the best way to accomplish this is to feint the opponent into playing it too early. This can be accomplished in a number of ways, but my personal tactic is to fake a dive with a heavy hitting melee unit (such as Grievous or Luke) or line up a shot with a huge dice pool (such as a Shoretrooper or Fleet Trooper) on an exposed unit.

While there is some flexibility to an Obi-Wan placement, the Phase IIs and Rex are a little more rigid to achieve their optimal use. The Phase II troopers function like a mini Aggressive Tactics, auto-generating a surge token that can be shared amongst any clone trooper unit within range one of them. Therefore, their placement location tends to be towards the rear-middle, where they are able to spread out and keep in range of most clone units.

Why is this knowledge important? Well, most players tend to hold their important units and heavy weapons for mid to late deployment and drop their naked squads early, and this can be a dead giveaway for where the bulk of the army will be placed, potentially tipping off approach routes to middle objectives and breakthrough pushes. Rex’s placement can be used to give away similar bits of information, but Rex has a tendency to be deployed slightly later in the deployment phase, once the framework of the army has already been deployed.

There are three main weaknesses that can be immediately seen when looking at your opponent’s list here: suppression management, lack of range, and weakness to pierce.

Quick spoiler alert, this is true for nearly every current Republic list.

While the clones may be able to easily dominate a range three firefight, this specific list contains only one permanently range four weapon, meaning that upon deployment, you should be deploying your range four and five weapons in safe locations where they can function as turrets in heavy cover. Forcing the opponent to move-shoot instead of aim-shoot is crucial, and plays directly into their problem with suppression management. Besides Hope and Rex’s 3-Pip command card, the clones do not have an easy way to remove suppression unless they have a face up token (via strict orders).

Finally, if you manage to set up the perfect storm of long range with pierce (such as a snipers), you can pick apart the exposed squads without fear of return fire. Being able to see these locations during deployment is crucial, and ensuring that you can quickly look at the opponent’s army and notice this is even more so.

I hope this guide has been useful in learning the principles of what to look for when you first see your opponent’s list. In the future, we (mostly Zach) will be breaking down other competitive lists in a similar manner in order to create some mental guidelines of what to look for when first seeing what your opponent’s have brought. If you have any specific lists or archetypes in mind that you would like to see featured, reach out to us on Facebook or Discord and we’d be happy to discuss them with you. Until next time, may your dice be hot!