In Star Wars: Legion, Clones are an army focused on a group of survivable elites. Quality is their niche. All Clone units in the Core Set roll red on defense, and you’ll find very few white attack dice. The counterpoint is that all of their units are expensive points-wise, every model is precious, and their activation count has the potential to be low. Your core set army is probably only going to have eight activations. It only makes sense, then, that you’d want to get the most possible mileage out of these eight. Clones have two powerful abilities which are their signature: the token sharing properties of the Clone Trooper keyword, and the Fire Support ability.

Clone Troopers are genetically engineered soldiers, and are so well coordinated that they can share their green tokens. Here is the relevant RRG entry:

This is rather straightforward to understand, but there are a few nuances and special tactics you can use to get more mileage out of this very powerful ability.

At first blush, Range 1 seems only to imply six inches. But, while the range for attacks is measured from unit leaders, the range for friendly effects is measured between any miniatures in the unit(s) in question. This means you can effectively “stretch” the range of Clone Trooper token sharing into a very wide radius by using all available cohesion range. 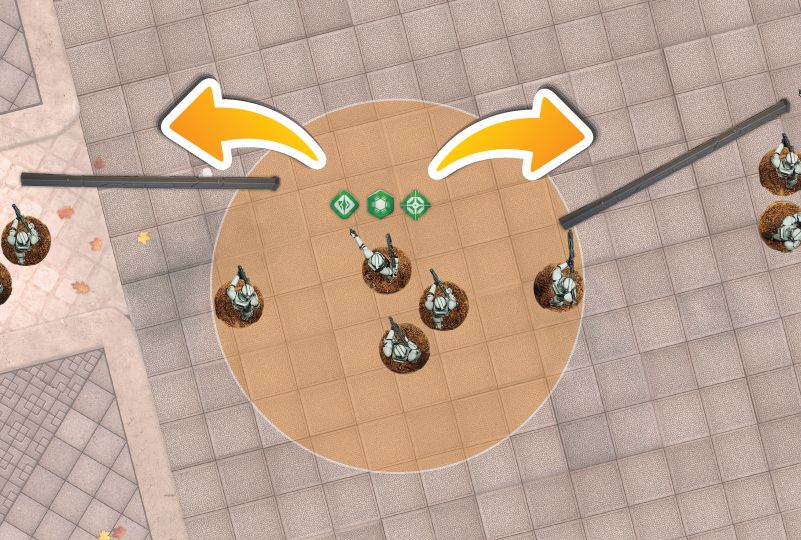 While the effects of clone token sharing are magnified when multiple units are at range one of one another, being able to spread cohesion and drop tokens strategically allows you quite a bit more flexibility. The way to accomplish this by making a ball or honeycomb formation with your corps units so that multiple Range 1 bubbles overlap.

A mistake new clone players often make is spreading their corps units out in a line. This limits the number of potential units that any one token could be shared with. It also creates a vulnerability where one or two casualties in a unit breaks their ability to share tokens with another unit because of losing Range 1. The entire Clone army should move as one cohesive body, supporting each other with token sharing on their way to victory.

In addition to the normal Aim, Dodge and Standby tokens, the Clone Wars Core Set introduces the new Surge token. Surge tokens are especially great at enhancing Clone units’ defenses, upgrading one defense die from 50% chance to negate damage to 66%. Because of the Republic armies’ elite focus, they have a low model count, meaning each clone is important. Getting Surge tokens to use on defense is a great way to help keep those expensive clones alive.

So, how do you get Surge tokens? There are a few ways to do this with your Core Set army. Chiefly, you’ll take a command upgrade called Aggressive Tactics on your first Commander, Obi-Wan Kenobi. 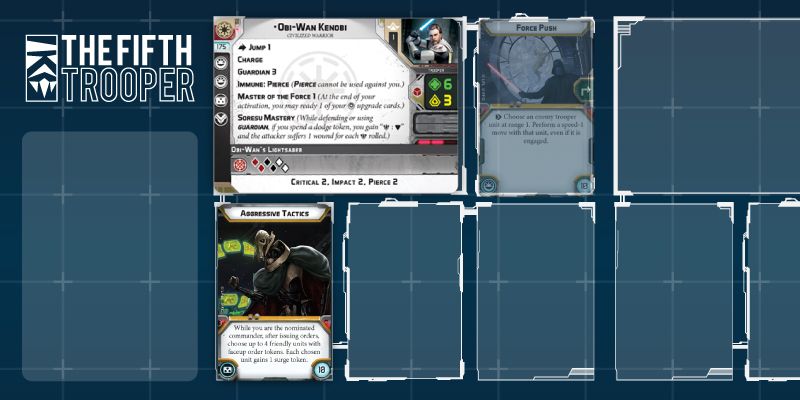 This upgrade is flat-out amazing. For 10 points, you can potentially save multiple expensive clone models from being defeated by converting defense surges, or enhance your offense by converting attack surges. This requires you to roll those surge results, so there’s a small chance your surge tokens can miss. Despite this, I believe that Clone armies that do not use Aggressive Tactics are at a serious disadvantage.

Because you’re a low activation army, you’ll want to lose priority during the early turns, and your three-pip cards allow you to get orders on three units, triggering Aggressive Tactics three times. You’ll note that Aggressive Tactics says “up to four” – how do Clones get four if you can only issue orders to three or fewer units per turn? (The card art hints that Droid armies have an easier time using this upgrade, after all). For now, you can equip HQ Uplink on a BARC Speeder to enable more face-up order tokens and maintain the value of this card on turns when you play a command card with fewer targets. A Push and two HQ Uplinks (if you took two BARCs) nets you four face-up tokens to assign the maximum number of surges.

Considering what we covered about the way Clones share tokens, Obi-Wan’s 3 pip command card can generate a large number of surge tokens, but it must be played in the right place. Spreading out your cohesion can increase the number of units in range to trigger General Kenobi’s effects. This should be easy if you have positioned yourself in that ball or honeycomb formation mentioned above. Ideally you’ll issue orders to centrally located clone units with this overlapping cohesion, generating lots of tokens. 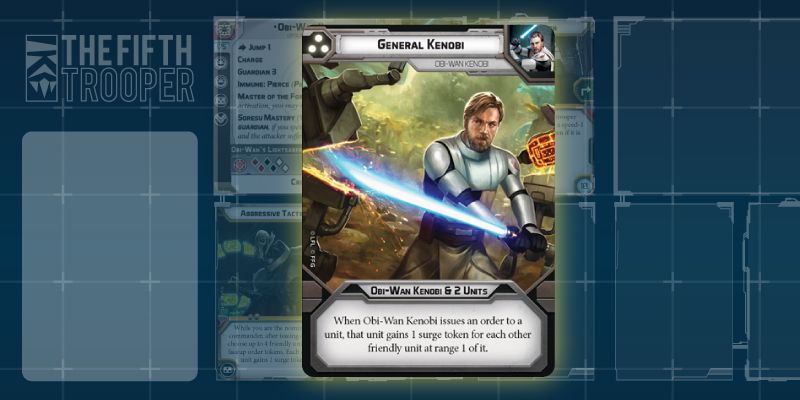 In the right spot, General Kenobi can generate very high numbers (on the order of 15 or more.) With such a large number of surge tokens present, you can feely spend them where and when you like, effectively granting your whole army surge to hit and surge to block for one turn. In addition, the card is a 3-pip, making it a fantastic card to play when the battle really gets going.

Lastly, there is one built in flaw with Surge tokens: you can’t use them if you don’t roll surges. Sometimes the lights are on, but nobody is home. It’s a dice game.

Sharing aim, dodge and surge tokens is rather straightforward, but you’re also allowed to share Standby tokens, which is a very powerful ability. Normally, a unit may only attack one time during its activation. But, by spending the Standby token of another Clone Trooper unit nearby, a clone unit can attack or move outside its activation, effectively “double tapping” or even “multi-tapping,” if multiple Standby tokens are available to spend.

It may ultimately prove challenging to use this technique. Standby is, by its nature, an “opponent’s choice” effect, that is, your opponent could choose to walk into it or choose not to. Standby tokens can also be removed by an opponent attacking from outside Range 2 and causing Suppression. It’s best to look and see whether this can happen or not before deciding to Standby, otherwise you risk having that action cancelled by your opponent. Keep the unit you intend to share the standby from out of sight to prevent this from happening, or make sure no enemies can move into range and then attack.

I highly recommend reading the Standby rules in full and understanding them thoroughly before using this technique, but here are some of the most salient points from page 64 of the RRG:

2. “A standby token may be spent before any effects that trigger after an attack, attack action, move, or move action.” (These are things like Relentless, Steady, Charge, Detonate, etc.)

While this move is strong out of the core box, but it will get even stronger with the release of the Phase II Clone Trooper expansion. This technique combines with the  Overwatch training upgrade that can be taken by Phase IIs, allowing Standby to reach Range 3, which happens to coincide with the maximum range of their guns. I’ll let you do the math on how strong that could be.

In addition to sharing their green tokens, Phase I Clone Troopers can also combine their attacks with the Fire Support keyword. Yes, that’s right, when you or your opponent declares Fire Support and picks up fifteen or more dice, it’s legal. It can be pretty shocking the first time you see it. When you absolutely need to kill something, call in Fire Support.

“When another friendly unit performs a ranged attack, a unit that has the Fire Support keyword and a faceup order token may add eligible weapons to the attack pool.”

The full RRG rules entry on page 38 goes into greater detail, but here’s what to remember:

1. You need a face up order token on that unit in order to use Fire Support.

Units that Fire Support add eligible weapons to the attack pool, which also means they add their weapon keywords to the pool. For example, a DC-15 equipped Clone squad would add Critical 1 to the attack pool if they were to use Fire Support. This is great when coupled with units that don’t surge natively, like Phase I Clone Troopers equipped with a Z-6 Trooper. This also means the supporting unit has to be in position to receive an order and fire without moving, so Fire Support requires a little bit of set up. To get the most possible Fire Supports in a given round, you want to issue orders to the units you wish to support with, then draw the token for the unit you want to attack with. This is also good with Ambush, when you’ll have a high chance of both winning priority and drawing into a corps unit. 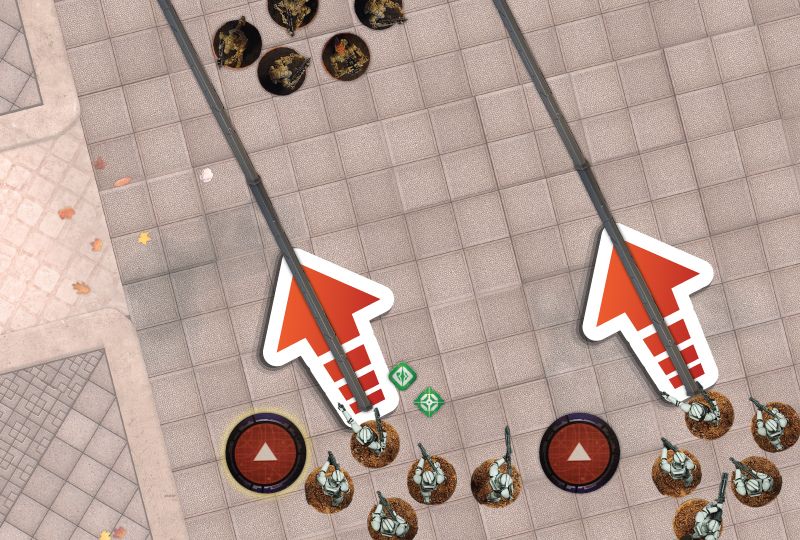 Using Fire Support has some interesting additional benefits. Units that Fire Support flip their order token face down, and therefore “spend” their activation doing so (they are considered activated). The primary advantage here is that suppressed units skip their rally step while doing this, so they won’t have to rally or check for panic. They do, however, miss out on Strict Orders, which may be present in some GAR armies, and not rallying becomes relevant if they want to do anything but Fire Support.

Also, in a recent ruling from Fantasy Flight, the Fire Support ability doesn’t qualify as an attack, so you can use it during Limited Visibility. Even if the Fire Supporting unit is beyond Range 2, using Fire Support works around this limitation as well. This is especially potent during the first round, since you can use Standby tokens to ‘claim’ areas of the board and threaten your opponent with a big response if they dare to move into that space.

Fire Support does have a downside: the supporting unit won’t get to move or do anything else this turn, meaning your opponent might have more ‘free’ activations later on (see the article on counting for more on this). However, If you obliterate a unit that has yet to activate, you can neutralize this disadvantage.

Fire Support and Token sharing are some of GAR’s strongest abilities. If you use what you’ve learned here about how to use these abilities to fuller potential, you won’t be disappointed with the results.