It’s been some time, but welcome back to the next installment of Outer Rim Tactics! This month we are focusing on using control pieces to force poor positioning, but not our own for a change. We’re going to dive into forcing opponents into these situations through the use of abilities such as scatter and force push, as well as others such as relentless and pulling the strings. Using some real table examples, we can walk through a few basic and intermediate scenarios in which the opponent is in a good position; and then we’ll flip it on them.

Let’s begin with Scatter, and draw from this example to help clarify. In our scenario below, Operative Vader is approaching a group of clones parked behind some heavy cover. He can’t get close enough for melee, so we decide upon a double move into Force Throw (which contains the keyword Scatter).

Force Throw also contains Blast, so let’s say we eliminate one clone model, and get to Scatter the rest. Now, I mentioned this article was about forcing sub-optimal positioning right? So let’s create some.

After Vader’s attack concludes, we get to use Scatter to re-cohere the troops around the unit leader. This specific scenario is great for two main reasons. The first is that Vader is able to pull the squad out of the heavy cover, lowering the squad’s protection to simply light cover (provided by his attack’s suppression token). The second is that the Z6 mini is now within range one of Vader, and it can be force choked. 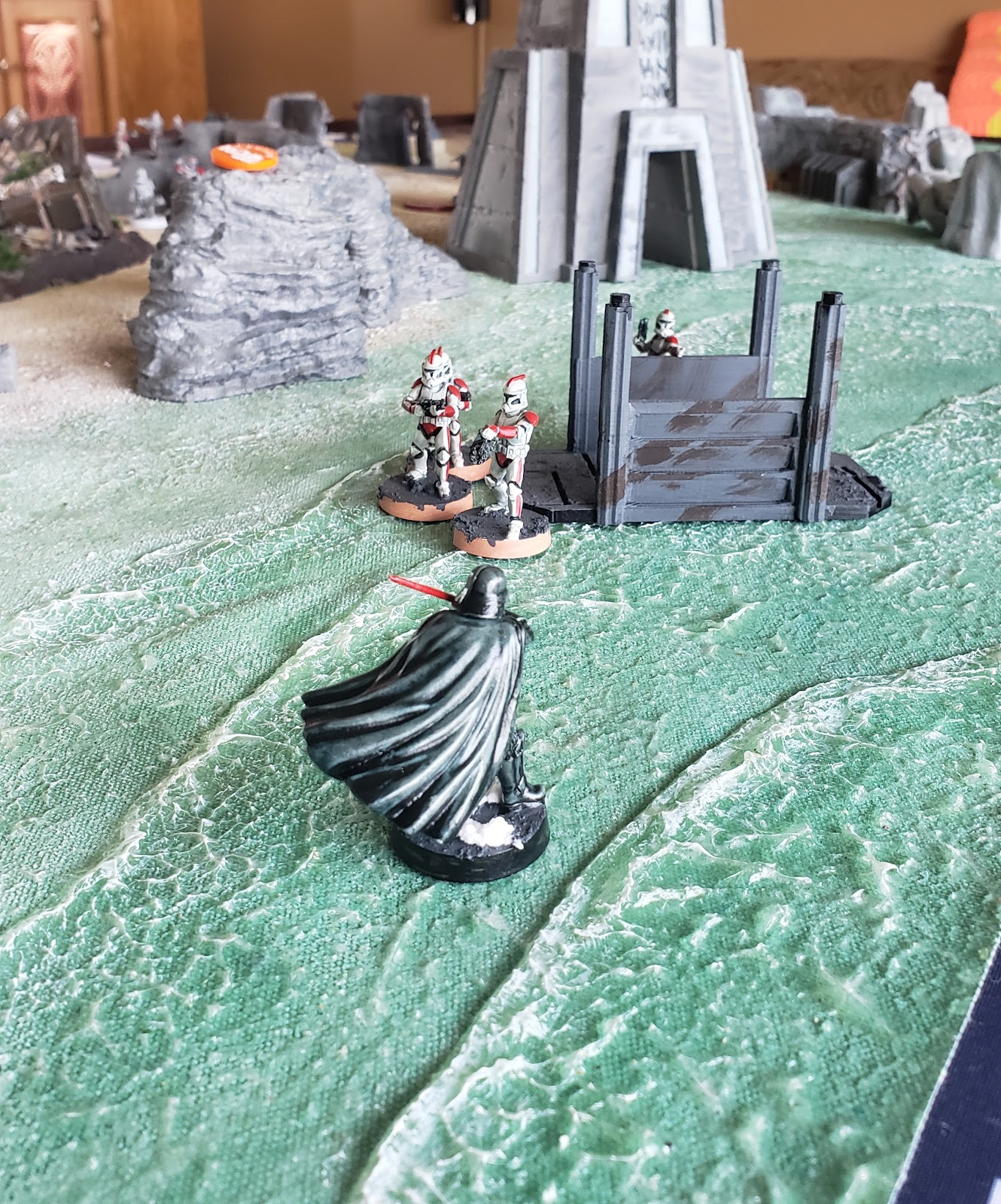 This scenario is not uncommon, and shows how a single attack can be utilized to force multiple problems upon your opponent. Sticking with the Dark Lord here, let’s visit (revisit?) Force Push next.

Keeping with the theme of a snow-based Vader on Scarif (sorry purists), Vader finds himself dealing with another clone squad in a great position. They already have a standby token, and Vader is outside of a speed two move, so engaging is not possible. Luckily we can turn the tables via force push. 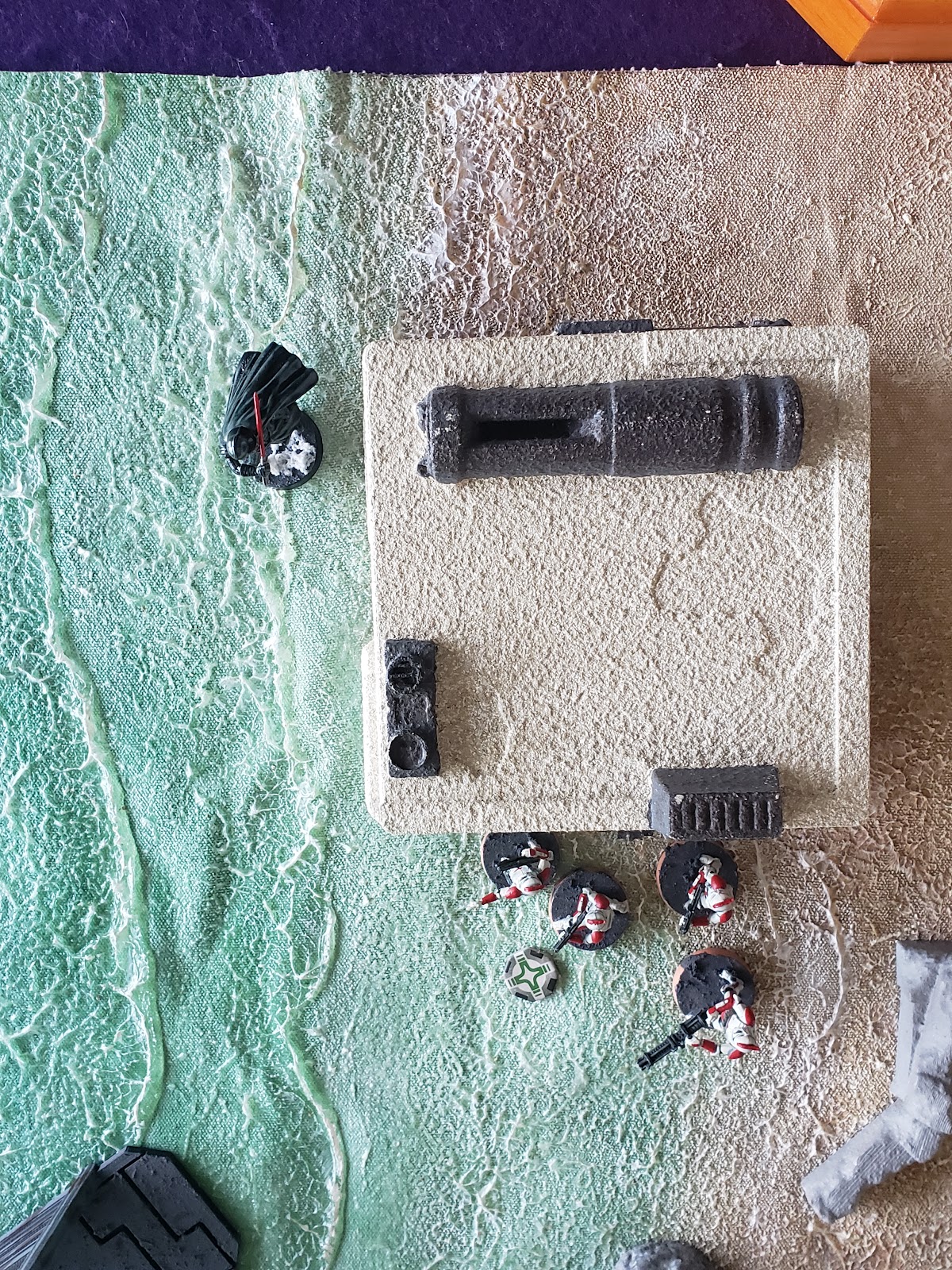 Force powers do not require line of sight to their target, only range, so force push can be used in this situation. Not only is this a free action, but it removes the clone’s standby token because they performed a move, effectively giving Vader a free shot to get into melee and lightsaber the clones into oblivion.

I have one final Sith example, bringing Emperor Palpatine into the fray.

Now, let’s combine everything we talked about before, and add another wrinkle. As I discussed above, using force powers against an opponent is generally about pulling them out of position and turning a decent/advantageous situation into a negative one. The Emperor’s ability Pulling the Strings is great to combine with this.Control

Unfortunately for our test subject Vader, he has already activated this turn, but these clones still need to die for some reason. On the positive side, the Emperor is currently activating. Because of his speed one move, he will not be able to get a clean shot on the clones. However, using both Pulling the Strings (PTS) and Scatter, he can. The first action uses PTS to have Vader move and use Force Throw to Scatter his opponents in line of sight of Palpatine. 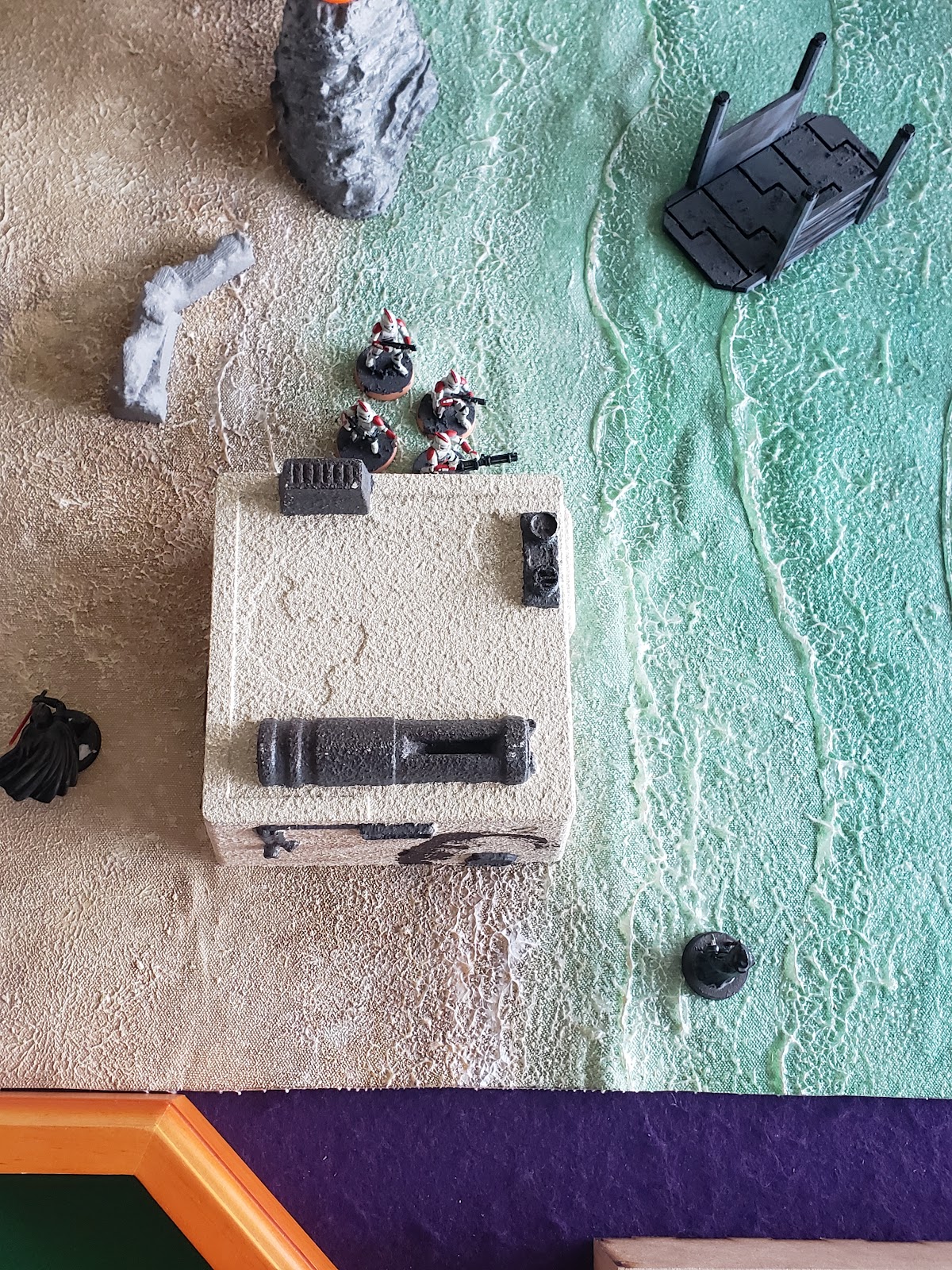 Now that at least three of the clones are visible, Palpatine can take a light cover shot, and remove a few clones, effectively dropping the squad to just the leader. Not too shabby. Additionally, PTS could also be used to set up a Vader charge if he had not activated, giving you some increased flexibility depending upon the situation present.

I’d like to very briefly discuss infiltrate, as in the (hopefully) very near future, I will be doing a stream with myself, Zach, and Keegan (Mitrokhin from the Discord) where we take an entirely too deep dive into Infiltrate and all its glory. Especially with the newer units that have arrived in the form of Cassian, K2, and Iden Versio; Infiltrate is poised to make a resurgence.

Using this Pathfinder example below (graciously painted and provided by Keegan) we can see the most common example of using Infiltrate: an out of cover alpha strike. In this specific example, the Pathfinders contain Bistan, recon intel, and an HQ uplink. Therefore, they can deploy late in turn zero, scout into range three, and unleash their dice pool on a one or two pip priority using the uplink.

Something to note is that this tends to work better against white dice save opponents, or short range heroes. Red dice saves are prone to better saves, and leaving an expensive unit such as Pathfinders or Cassian naked in the wind often backfires immediately.

If you’ll notice, there has been a common theme through the examples discussed above: the use of the keyword Relentless. Relentless allows you to perform a free attack action after moving, and is pivotal to the effectiveness of both Darth Vader (our new favorite guinea pig) as well as Tauntauns.

This keyword is particularly useful because it extends a unit’s threat range by another movement length, effectively allowing us to get around corners and create no-cover shots into opponents, as shown below. (Please excuse the half painted models here!) 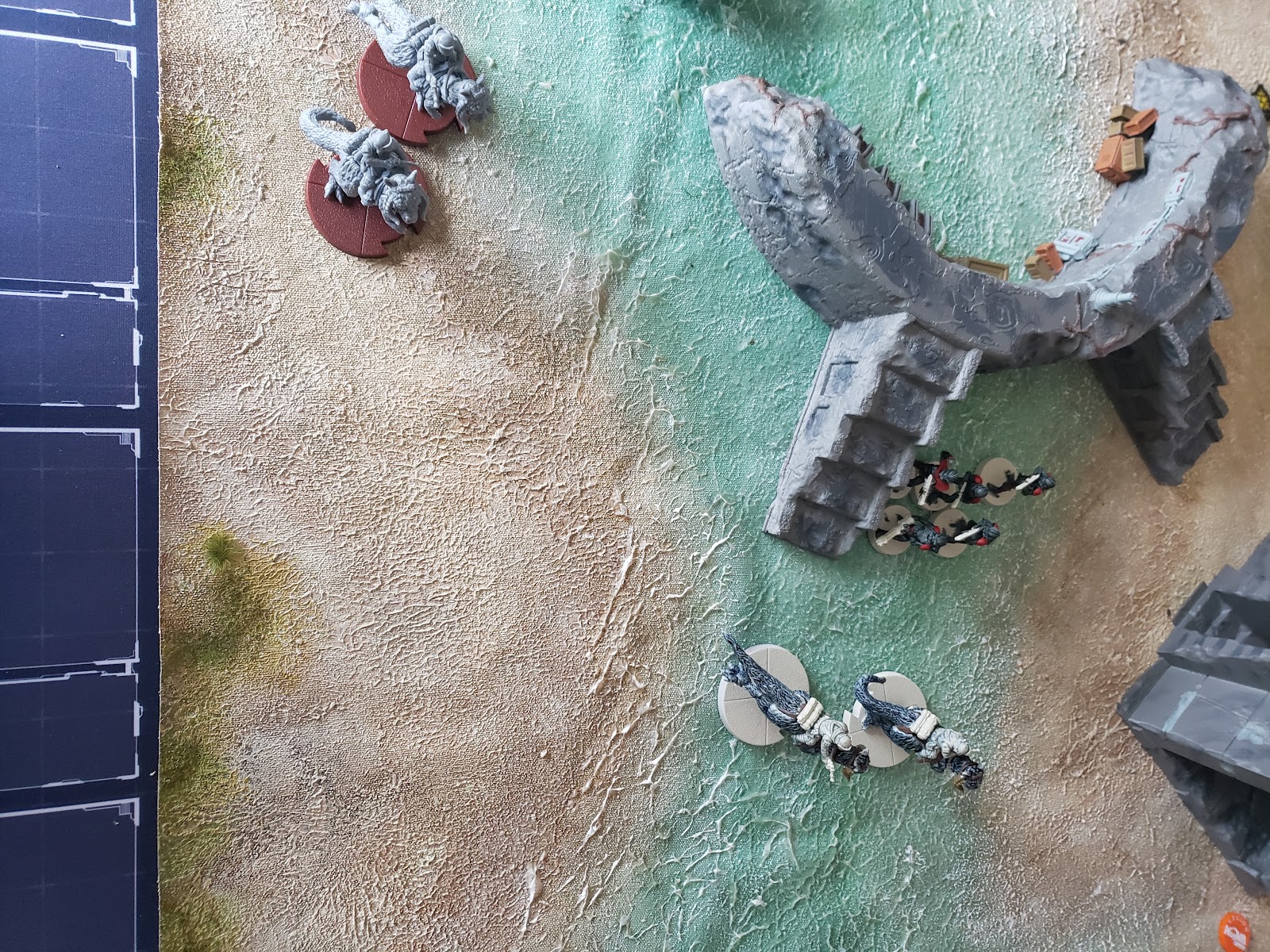 For our purposes here, the four tauntaun models represent one squad, before and after they have moved. The maroon based tauntauns represent our units starting position. With a regular unit that does not possess either Relentless or Steady (which allows you to perform a ranged attack after moving), the tauntauns would not be able to get a great shot on the clones hidden behind the staircase.

However, because the tauntauns can move twice and still shoot, they can reach the white based position, effectively giving them a no-cover shot onto the clones, and opening them up for a greater damage potential. Basic? Yes. But knowing what units possess these keywords and planning a few steps ahead to either set up or prevent these double move shots are key to winning.

I hope these examples and pictures have helped to clarify some of these abilities and keywords. Being able to turn a disadvantageous situation into a positive one is key to Legion, and is a source of much of the game’s strategic thinking. There are plenty of more keywords and examples than the ones I provided here, but this is a great starting point to take the next step into intermediate and advanced play. As always, if you have questions or comments, feel free to reach out on the Facebook page (Mike Syrylo) or on the Legion Discord (GhostWalking)!

Stay safe, stay well, and I’ll see you all next month!