Playing Legion, or really any tabletop miniatures game, is a skill. You’ll hear a lot of players carping about how their dice were bad after a loss, and yes, sometimes the dice are bad. But the dice are less bad than we usually think, and it’s better to focus on those things we can control, like our decisions.

Technically, this article contains six ways to win more, but number six is at the end.

While it might seem effective to take a unit that’s fully loaded (and this can be right at times), it’s generally better to take fewer upgrades on each unit. There are a limited amount of points to spend when building, and you want to make good “purchases” to fill out your list effectively.

Think back to the last time you played your list as it currently is. How many upgrades ended up going unused? Get rid of those in your next game and “buy” something else. Did you have any upgrades that you only used one time? Maybe get rid of those, too. 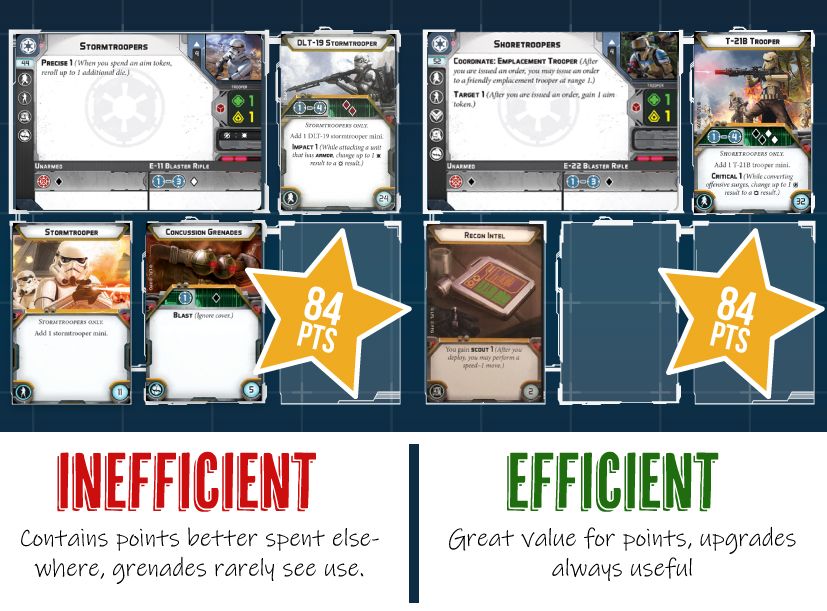 In general, lists that are more efficient than others have an edge. In an ideal game, you are using all your points all the time. A well-built list strives to achieve these things. Question every unit and upgrade and see if they measure up.

As a player/organizer, I get asked a lot of questions about the rules of the game. One of the most frequent is about how certain unit types interact with objectives. “Can emplacement troopers do Vaporators? Do vehicles score on Key Positions?”

Sometimes I’ll need to remind my opponent of these interactions during a game, and awkward silence ensues when my opponent thinks they did the objective with an eligible unit. This tells me they did not read the objective card closely enough at the start of the battle!

This table below explains what types of units can interact with and score the five current objectives: 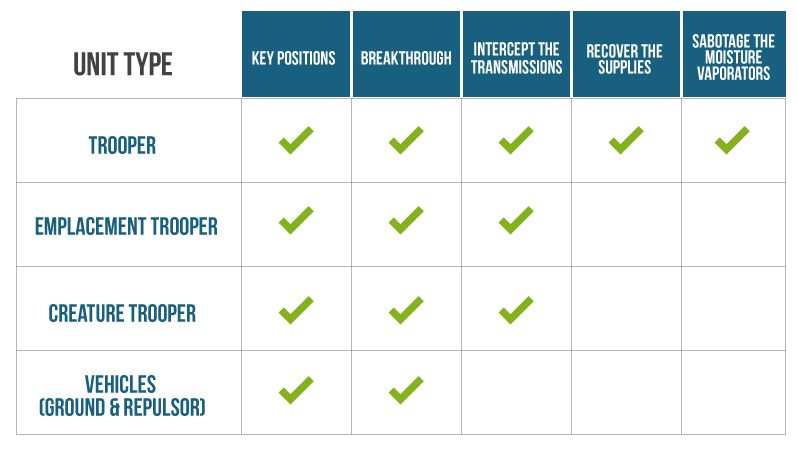 The time to figure out what units can do a particular objective is before a game starts, and this will become even more relevant once the Vital Assets expansion is released. Battle cards can also serve as a guide for building your list; you’ll want to contemplate what objectives you can do effectively.

Knowing the game’s battle cards and how your list interacts with them is one of several keys to Legion victory. Especially the blue ones.

Let’s say you’re in the middle of a game and see a strong attacking move. This is a dangerous time – your vision of the whole board fades and all the focus is on this one strong move. It’s going to be spectacular. You just can’t wait to pull this off and really stick it to your opponent.

The moment comes, the dice are rolled and… nothing. It backfires spectacularly. Not only that, it’s left the attacking unit in range of several other enemy units. For the rest of the round, that unit gets shot until it disappears.

Every experienced player knows this pain, and knows that aggression is generally a trap. However, you can’t win just by sitting on your hands. Being aggressive is not strictly bad – it’s how that aggression is timed relative to what’s going on elsewhere. So, how do you know to move out and when not to?

In Legion, you’re allowed to measure with your range ruler at any time (see RRG 48, “Premeasuring”). This is a huge topic on its own, so I’ll give the briefest summary I can. 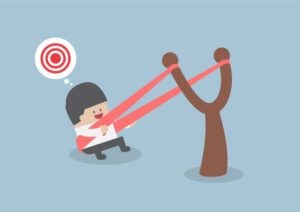 The range ruler is an amazing tool. I call it my “interpreter” – it helps me translate what I’m seeing in front of me into useful information, and guides me to where I should go next. It should see a lot of use during the entire game, not just on your turn.

One of the strongest uses of the range ruler is determining what attacks are possible. Threat range is a term not defined in the Legion glossary, but is frequently used to describe how far a given unit can reach with its weapons during its next activation.

Look at the range of an enemy unit’s weapons, then add 1 range band to it if they are Speed 2. This usually gives you a fairly accurate idea of where they can move to attack during one activation. Slower units will be shorter, and faster units will be longer.

One of the fastest ways to gain an edge over your opponent is to attack their unactivated units.

In Star Wars: Legion, each unit gets two actions during its activation. However, if a unit starts its activation with suppression, it must rally to see if it remains suppressed or not. If it does, it will lose an action, becoming only half as effective! This generates a lead in quality of activations.

I wrote an in-depth guide to how Suppression works in Star Wars: Legion. You can click through here to read more.

In addition, destroying miniatures that haven’t had a chance to attack this turn goes a long way towards protecting your own. The military adage “the best defense is a good offense” holds true.

Best of all, if a unit that hasn’t activated is attacked and subsequently wiped out, this creates a tangible shift in the flow of the game towards your side. Not only does that unit not do anything, since it’s dead, you also gain leverage on activation count. Read more about how to leverage activation count here.

The final step to all of this is to start applying these ideas to your Legion games. Deliberate practice is one of several keys to improvement. I recommend picking one area to focus on during your next game. For example, you could say to yourself, “This game, I will focus on attacking unactivated units.”

It’s one thing to read it in an article, it’s up to you to apply what you’ve learned!