Imagine this: it’s the Las Vegas Open 2020, your first ever wargaming convention. Not only did you play in the tournament on Saturday, but you judged on Friday and helped out with the Narrative on Sunday. You decided to take a red eye flight Sunday night to get back to work on Monday. You are mentally and physically exhausted… yet Kyle Dornbos, our benevolent blog overlord, demands your article on time or you will pay a fine. Well I’m just here so I won’t get fined!

Before I go on any deeper into the subjects that I would like to hit on I would like to extend a thank you to LJ Pena and the staff he comprised heading up to the event to make sure it ran as smoothly as it possibly could. This was, in fact, the biggest Star Wars Legion event up to this date and it can’t be understated how great the event was. I am already looking forward to going back next year!


I come from a competitive hockey background which makes tournaments like this seem like nothing, at least when heading into the tournament. Now that the tournament is done? I think this might have been the biggest test on my body and mind, ever. LVO made those hockey tournaments seem like a walk in the park. Now most of that is my fault for agreeing to not only play in the tournament but to help out with the tournament in whatever capacity possible. I don’t think I would recommend first time wargame convention goers to take all that on their plate but when approached with the opportunity it was hard to say no and I don’t regret the decision one bit.

The first thing I want to tackle in the bevy of possible topics is judging. The Las Vegas Open was somewhat of an anomaly as it was one major event but split into two different heats. Normally players don’t get to judge in events like this but we got to do so because of the heats being split. All that said, after judging this past weekend, if the opportunity to judge was ever there again for me but I couldn’t play: I still think I’d do it. I know what you’re thinking: why would you choose judging over playing? I’m sure this is a question that Brendon Franz, the head judge/high marshal, probably gets asked all the time and might be better to answer it, but in short it’s just as….fun? Not really fun in the sense of the word but more that you’re enjoying yourself as others play the game you love. You have a bit of self importance knowing that you’re the one walking around to ensure everyone has a positive gaming experience.

I think one of the most important pieces of advice if you were to ever judge an event: always double check yourself if you are unsure. I’ll admit, and I even admitted to the player later on, that I got a ruling wrong. The rules reference guide is a finicky document with a lot of ambiguity. If you have any doubts of the rule: look it up. We’re all human beings, we’re not perfect. I mean, why else would there be a judge team?  I look forward to helping run another event in the near future, if opportunity knocked!

If you listened to Notorious Scoundrels before LVO you probably heard that I was bringing Clones to this event because I just can’t play Tauntauns. It’s not that I don’t want to play Tauntauns because of the stigma, I just can’t play them. They are totally not my playstyle and I have accepted that. Clones fit my playstyle and I can’t express how happy I am that I brought them to LVO despite not being 100% competitive yet. Here’s the list: 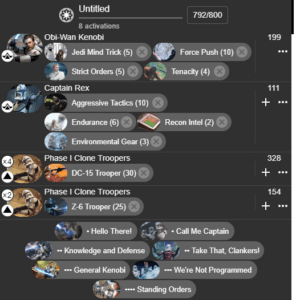 Rather than go with a game by game synopsis I’m just going to do a brief rundown of them as best as I can. I’d like to give a real battle report, if I could, but I didn’t take enough pictures or write down any notes to feel like I would accurately depict every game that I played in a proper way. I would do a disservice to the great games I played all weekend. 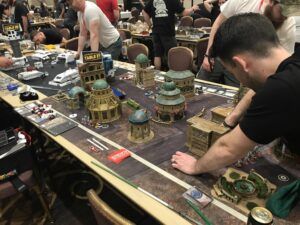 I finished with a 2-2 record for the weekend but quite honestly I felt like I was in every game. The first game was against a Leia/ATRT build with Rebel Veterans and it was arguably the hardest matchup as I had no real answer for the ATRTs. I ended up going on to lose this game, unfortunately, and my weekend effectively stopped right there (competitively speaking) however I was in this game to the wire. I played a strong opponent and I almost took the game, I was pretty confident heading into game two that I could be better.

Game two was against a Krennic/Shoreline on a beautiful, beautiful Naboo map. I was able to get blue player on Vaps which gave me an early advantage of making my opponent have to come to me. I think some of my favorite playing moments came from this game, sorry Zane, but there is just something about hitting Krennic with Jedi Mind Trick on his Annihilation Looms turn to then have him panic off the board! 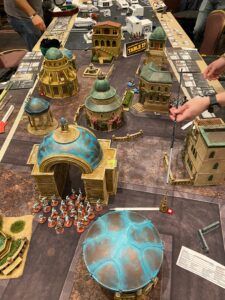 Game three was also against a Krennic/Shoreline variant in which I took blue player again to play with my command deck/choose board edge, which is still pretty important these days even with this 8 activation Clone list. I was able to get recover the supplies and Kenobi on to the middle box, eventually. Once I was able to get Kenobi to claim the box and relatively safe for the remainder of the game there was not much my opponent could do from there. I’m effectively going at least .500 for the day after this win.

My last game ended up being against a fellow Clone player in what was almost a mirror match. Decisions I made in round four were decisions I don’t make in round one, and that’s on me. It should also be stated that my opponent was a great player and punished me for these mistakes that I made, but if there was any take away from my playing experience is that it’s a long day. Drink and eat. I had like six different bars sitting in my carrying case, I just forgot about them as the day went along.

While I would have loved to have gone 3-1 I’m content with the 2-2 record with a list that effectively put me on my backfoot all day. At the end of the day I was mostly happy that I played a list/army I enjoyed rather than trying to play a list I can’t run as well as I would like to. I’m super excited for the Clone army going forward!

I saved the best for last! Ironically enough, as I am part of The Fifth Trooper, I had only met Mike Syrylo up until this point. So first and foremost it was extremely great to meet everyone that went from the team this weekend for the first time. However, just remember, if you have a video call when recording a podcast with the boss days before the event: don’t shave your face before the event. Otherwise he’s going to stand there looking at you like: ‘wait do I know you?’ until he figures it out, sorry Jay!

Really, though, as sappy as it may sound: this community is the best. I wish I had more time to spend with everyone I got the pleasure of meeting this weekend because it never felt like an adequate amount of time off the tables but that’s just how it is. If I sat here and rattled you all off by name we would be here until next week. It truly can’t be understated that this is the best part of the event because it is. Sure, pushing around our plastic armies around a table is a blast, I mean we traveled for hours and hours to do so, but putting those armies away and hanging out with everyone was worth the entire trip. I’m glad to have finally put so many faces to names and I very much look forward to the next one! Hopefully we have more time to hang out next time! See everyone in Chicago!

One thought on “Reminiscing the Las Vegas Open”